I first saw this movie on recommendation from my mother who had seen it in theaters with some friends. And I LOVED it! My favorite thing about it was that you had all these different characters that were all connected to each other in some way. Just like a Jane Austen book, although much more complicated. 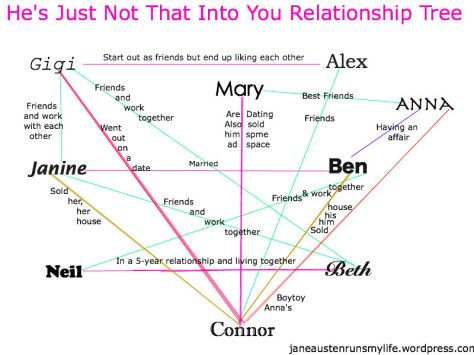 So as you can tell from my diagram, this movie can be a bit messy just plotting it out on paper, but I will do my best.

Gigi (Ginnifer Goodwin) is searching for a soulmate, her perfect match. She goes on a date with Conner, her friend Janine’s realtor but after that blind date he never calls. Not one to give up on what could be “the one”, she goes to Connor’s best friend’s restaurant in hopes that she can find him. Instead she runs into Connor’s best friend, Alex (Justin Long). The two become friends, with Alex giving her advice on guys and promising to set her up with someone. However, all the time they spend together causes Gigi to start falling for him and believing her cares for her too. Is she right? Or will she just mess up her friendship? 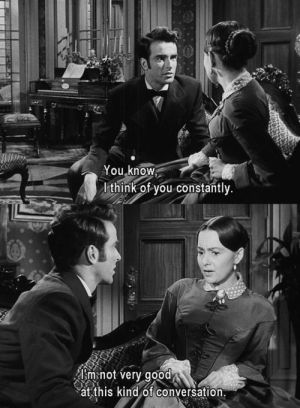 Janine (Jennifer Connelly) and Ben (Bradley Cooper) dated all through college, marrying after graduation. They’ve been the perfect couple, having just bought a house, one that Janine has been actively redecorating and renovating. But not all is going well in their household. While Janine wants a baby, Ben doesn’t even want to be married, starting an affair with singer/yoga instructor Anna (Scarlett Johansson). While Ben is out all the time, Janine starts wondering if Ben is being completely truthful to her. Will they power through this or fall apart?

At first Ben tries to stay away from Anna, but they become friends, developing into an affair, both emotional and physical. Anna at first doesn’t mind being the other women, but when she is frustrated or in need of an ego boost; she heads over to her boy toy and doormat, Connor (Kevin Connolly). Connor is a sweet guy who has been in love with Anna and is willing to take anything he can get to be with her. But when he pushes for more, will he gain a real girlfriend or lose her?

Neil (Ben Affleck) and Beth (Jennifer Aniston) have been dating/living together for seven years. Beth wants to be married but Neil doesn’t believe in it. Beth has never tried to push it, but just hoped that Neil would change his mind and propose, but every year she is disappointed. After hearing the advice Alex gave Gigi, Beth comes to realize that Neil will never marry her. She gives him an ultimatum and when Neil still doesn’t propose, she ends the relationship. Will she be able to move on? Or has she ended a relationship with her soulmate?

Mary (Drew Barrymore) is like Gigi and looking for love; except she went the online dating route. Through social media, dating sites, and more; Mary searches but finds herself constantly disappointed. What’s a girl looking for an old-fashioned romance going to do in this 21st century way of electronic dating?

Most Romantic Moment: You Are My Exception

So anyway, what I find to be the most romantic moment is in the Gigi and Alex storyline. Gigi, as I have said before, is a little boy-crazy and has had many bad relationships. In her chance meeting of Alex he gives her some stone cold advice. If he isn’t marrying you, he won’t marry you. If he isn’t calling, he won’t call. If he goes out of town and doesn’t call, end it he doesn’t care about you as he can always call. You can pretty much summarize it up in this one key sentence: 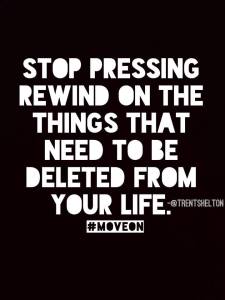 So Gigi continues to ask him for advice, they become friends, and then Gigi falls for him hard. She believes he likes her too, but when she makes a move Alex turns her down fast. Gigi is made but lectures him about how she makes mistakes but believes in love and will keep trying to find her “perfect match”.

So, the most romantic part is at the end. Gigi has just gotten back from her blind date that Alex set her on when there is a knock at the door. To her surprise it is Alex!

Alex has been destroyed since her turned Gigi down. He can’t sleep, eat, his focus is off. He realized the mistake he made and came to tell Gigi how he feels.

Gigi: [opens the door, thinking it’s Bill] Did you forget something?

Gigi: Really? What did you forget?

Alex: [pulls out a promotional pen from his pocket] This.

Gigi: So you came all the way here at 11 o’ clock in the night to give me a promotional pen?

Alex: Yeah… Yeah, I did. I thought I would come up with some really great excuse to get over here. That’s how it’s done, right?

Alex: Look, I can’t stop thinking about you. I… It’s a problem. I drive by your place; I call and hang up; I’ve turned into…

Gigi: A wise person once told me that if a guy wants to be with a girl, he will make it happen, no matter what.

Gigi: But when I was hurling my body onto yours, you did not seem to want to make it happen.

Alex: Okay, yeah, here’s the thing about that… You were right. I’d gotten so used to keeping myself at a safe distance from all these women and having the power that, that I didn’t know what it felt like when I actually fell for one of them… I didn’t know.

Gigi: Look, I just went out with your friend Bill. He might be just exactly what I need. No drama, he calls; he does what he says…

Alex: [stepping closer] I can do that stuff too…

Gigi: [Alex kisses her, she smiles]… I’m the exception…

Alex: [whispers] You are *my* exception.

Awwww! That moment is so romantic.

The fact that he listened to her to do his approach the same way that Gigi did it earlier when she was trying to meet up with Connor. The fact that he was willing to share how he feels with her! And that he told her You’re My Exception, after telling her she wasn’t an exception she was a rule. To reenforce that she is special, ah, just unbelievably perfectly sweet.

This part became doubly romantic when I found out that it was a true story. I couldn’t believe it! 😀 This last spring I found the book He’s Just Not That Into You: The No-Excuses Truth to Understanding Guys, when I was stacking books at the library. The book was written by Greg Behrendt and Liz Tuccillo, and is really good. Anyone who has been in or will be in a relationship in the future should read it.

The character Alex was based on Greg; especially the story of the exception. It was so sweet reading about how when he met his wife everything changed, he changed.

That she was his exception! An Aww Moment!

For more on Ginnfer Goodwin, go to Fantom of the Opera

For more on Justin Long, go to Every Twenty-Third Spring for Twenty Three Days, it Gets to Eat: Jeepers Creepers (2001)

For more films based on a book, go to Feast Your Eyes On My Accursed Ugliness: The Phantom of the Opera (1925)