Favoritism sucks, unless you are the one getting it. But even then it can be bad as others will be jealous of you and mean to you because of it. After all look what happened to Joseph.

Now everyone knows that in a family of more than one there is a favorite child. And everyone suspects that it is someone other than them. Hardly anyone ever thinks they are the favorite. Now while we know this, we never expect to hear our parents actually say who the favorite one is. Nothing sucks more than to hear your parents clearly state who they love best..

Knowing who is the favorite or the golden child often drives children to rebel or do all kinds of things to hurt their parents or beloved sibling because they are so angry. I mean its hard not to sympathize with the way they were treated and understand why they end up doing such horrible things. I mean look at King Lear. I don’t feel bad for Goneril or Regan but  empathize with Edmund. I mean after constantly being told you are nothing more than an accident and worthless because you are not legitimate, would make nearly anyone power mad and crazy. 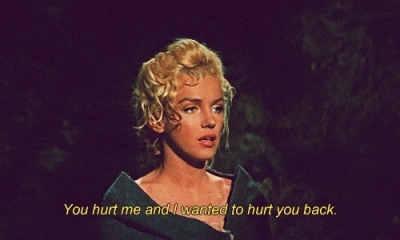 In Pride and Prejudice, parental favoritism is loud and clear and in your face. Mrs. Bennet just adores Lydia (probably because Lydia is exactly like her) with Jane being her second favorite as in Mrs. Bennet’s eyes she is the prettiest of all the Bennet girls.

“I am sure she [Elizabeth] is not half as handsome as Jane, nor half so good-humored as Lydia.” (pg. 4)

Mr Bennet too has his favorite, and like Mrs. Bennet has no qualms saying who it is:

“They are all silly and ignorant like others girls; but Lizzie has something more of a quickness than her sisters.” (pg. 4)

Just like all those other things I referenced, letting your children know who you favor can totally screw them up. I mean first of all look at Lydia. Lydia knows she is the mom’s favorite and just does what she wants to, never thinking about how she is affecting the rest of her family. She is spoiled and never disciplined. I mean it’s no wonder that she runs off with Wickham, with her attitude, you wonder how she didn’t get in trouble long before.

Then you have Jane, who all her mother focuses on is her beauty while her father mostly ignores her. Poor Jane, forever only being seen as an object rather than a person. Her mother sees her as a tool for prosperity, always going on and trying to maneuver her. I’m surprised someone hasn’t written a book with her version of the story. I mean with all the Darcy, Wickham, Lydia and numerous other ways the story has been retold you kind of wonder why one hasn’t been done to show us what Jane thinks.

And what about Kitty? Older than Lydia but always stuck in her shadow. Either getting blamed for things (like coughing or her being at fault for Lydia taking off with Wickham) its no surprise that she holds on to the secret of Lydia running off, happy to finally be the center of attention.

And poor Mary. She gets nothing! 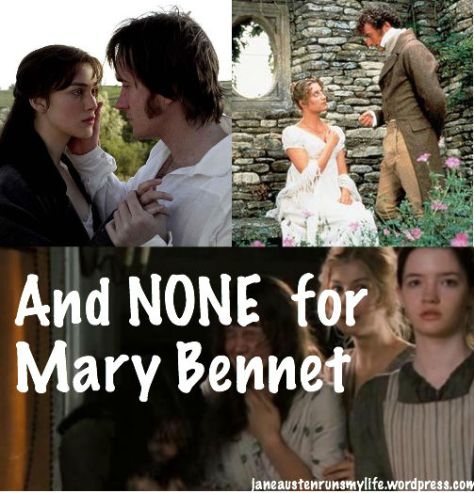 Parody of the none for Gretchen Weiners meme

She’s not the pretty one or the smart one and is mostly ignored by everyone. Jane & Lizzie are best friends and Lydia & Kitty are best friends; leaving Mary all alone with nobody. No wonder she throws herself into her music, intent on proving how special she is with her musical talent.

Just make sure your musical genius doesn’t lead you to becoming a stalker or murderer or recluse. We all can’t pull off that story

One of these days, poor Mary might just break. If the girls lived in modern day I would definitely put my money on her being featured on the news. Tonight on Snapped: One day mild-mannered Mary up and murdered tons of people. When asked why:

You made me stop and let other girls have a turn.

And Elizabeth…well Elizabeth is practically perfect in every way. It’s amazing how she was able to do that 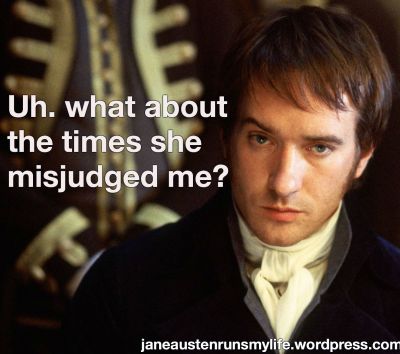 For more Jane Bennet, go to Waiter, There’s Some Disney in My Jane Austen

For more Elizabeth Bennet, go to The Real Revolutionary

For more on Mary Bennet, go to Just Can’t Get a Break

For more on Kitty Bennet, go to Flu Season

For more Lydia Bennet, go to Death Comes to Pemberley