Now supposedly there are 6 people on the planet that look like you, your doppelgängers.

Now out of these six doppelgängers, supposedly at least one is a famous celebrity.

Now I don’t know of that is really true, but hey I guess it could be.

I know people used to say that I looked like Matilda. This was because we were both small, wore dresses, had the same hair, and of course the fact I always had a book in my hand.

For more Matilda, go to We Shall Rule the World! 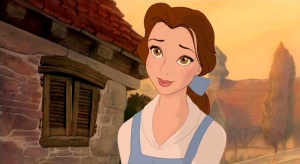 I know what you’re thinking: A cartoon character? Really? But hey, I just said celebrity look-a-likes, I never said they had to be real people.

So as I grew, I also grew out my hair very long, always wearing it in a ponytail. As I continued to read all the time and carry books with me, I quickly was compared to Belle from Beauty and the Beast, and truth be told, I didn’t mind at all.

For more on Beauty and the Beast, go to Heaven on Earth

When I was in high school, people would tell me actually quite a lot that I resembled Mandy Moore. Specifically the Mandy Moore from A Walk to Remember.

I had never seen that movie, or really anything of her work (besides The Princess Diaries) so I never agreed with that idea. At least not until my junior prom. We shared a similar color of hair, mine being long and straight with bangs, but for my junior prom I curled it exactly the way she had it in A Walk to Remember, and wore a similar, but deeper blue, dress. Yep folks, I was a dead ringer.

And the funniest thing about it was that I didn’t watch this movie until a year later, so I had no idea that was what she looked like in the film.

So Mandy Moore and I are definitely look-a-likes.

For more on Mandy Moore, go to Fulfilling the List: A Walk to Remember (2002)

When I was in my late teens, people started telling me that I looked just like Claire Forlani. At first I was like nooooo way, she is so much prettier than me. But in an objective way, I kind of do.

We both have similar face shapes and bone structure (although my chin is smaller making me look younger). We also have similar noses and share green eyes. With my hair short like it is now, or even just pulled back, I could confidently say I can pass myself off as her look-a-like. Well her look-a-like in Meet Joe Black.

For those of you who have been wondering what I might look like, I hope this answers some of your questions.

For the rest I have a question for you. Who do you look like? Comment below as to who your celeb double is.

For the previous post, go to The Mysterious Triangle

For more How I Met Your Mother, go to Fandom Love