I don’t know about you all, but I have been eating a lot of Halloween candy, in fact too much.

But as I continued to eat, it made me think…what if the Jane Austen heroines lived in today’s world? What kind of candy would they eat?

So I thought on it, and this is what I came up with.

Elinor is the eldest of the Dashwood sisters and when her father dies, causing them to lose everything to entailment and have to live on less money, she rakes control in searching for a new home. After the move when it is clear that her mother is still sick with grief and her two younger sisters lack the age and temperament for such matters, Elinor takes over running the house and trying to work out a way for them to live on their budget. As Elinor is the champion of saving and surviving, I think that if she were to purchase a sweet she would try to make it something that is cheap and easy to share. Therefore a Kit Kat seemed the most likely choice for her. Kit Kats are easy on the wallet and designed to be evenly split between four, the exact number of Elinor’s family.

For more on Elinor Dashwood, go to To Edward or Not to Edward?

To me I see Marianne as a Chocolate Truffle. We know how romantic she is, so of course she is going to not only want chocolate, but something more than the average fare. Being raised rich, a truffle is something she would be used to eating, and then when their finances change, she would still be able to eat a few cheaper ones, every now and then.

I can just see her and Colonel Brandon and her reading poetry and eating truffles after they are married.

For more on Marianne Dashwood, go to The Dashwood Sisters Tell All: A Modern Day Novel of Jane Austen 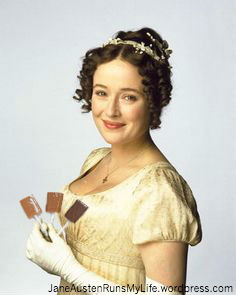 NOw contrary to the 2005 version of Pride & Prejudice, the Bennets are not poor. They are lower than Darcy as his Aunt is in line for the throne (a LOT of people have to die first but still), Emma Woodhouse, and Anne Elliot (prior to her father losing so much money). They are slightly under the Dashwoods, so they are pretty well off. Not super rich, but doing well. Therefore I think that Elizabeth would pick something in between. Not super rich, but a little more high class than something you can buy at the corner drugstore.

Therefore I think that she would pick the See’s Lollipops. See’s candy isn’t super expensive, but not something you can find just anywhere, sometimes you have to travel a bit to get it. Plus as she is a walker, I see her with a lollipop as she can eat it and go.

For more on Elizabeth Bennet, go to The Ugly Truth

Now Fanny we all know was born into a large, less fortunate family. She is sent to live with her Aunt and Uncle, the Bertrams; and abused by her other Aunt Norris. Mr. Bertram isn’t really in her life as he is always having to go away on business or not interested in child rearing; Mrs. Bertram is also not really checked in. So the person who raises her is Aunt Norris who never wants her to forget she is poor; giving her extra work, never allowing her to do things with the other kids, playing the two eldest sisters off of her and encouraging their bullying. So if I had to pick a candy, the only one I think Aunt Norris would allow her to have would be mints or gum. Both are extremely cheap and what she would think as suitable for her poorer relation.

I think out of anything she would only buy Orbit as it doesn’t last long and falls apart the more you chew it. But just like Fanny’s personality and actions have her end with a better life than her cousins, chewing gum rather than eating other candy would give her a better smile and oral hygiene.

For more on Fanny Price, go to Waiter, There’s Some Disney in My Jane Austen 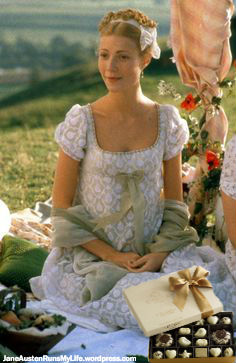 Emma is the richest out of all the Austen heroines. She doesn’t worry about money, she has one of the highest places in their local society; so what would be the perfect candy for her? Only one thing came to mind, Godiva. Godiva is one of the most expensive chocolatiers and just perfect for someone like Emma who is used to having the best. The only issue she would face would be whether or not her hypochondriac father would allow her to eat it, or his fear of illness taking her away  would make him not want it in the house. Otherwise, Godiva would be Emma’s go to.

For more on Emma Woodhouse, go to The Austen Series: Amanda 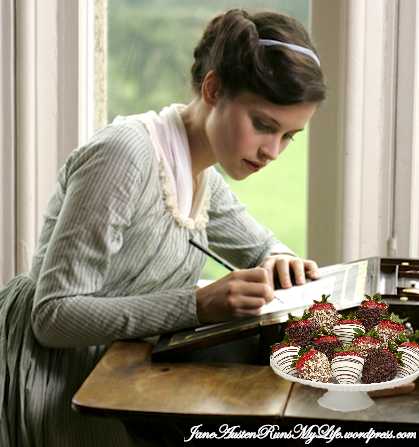 As a child Catherine was very active in sports, climbing trees, running, etc; a tomboy. In that stage I see her as a bubblegum chewer (like Bazooka), however as she grows older her taste change to reading, especially Gothic, Romantic fiction. With that new take, I don’t see her as a gum chewer, but having moved on to something that pairs better with her reading, chocolate covered strawberries. Not only are these romantic, but something that will fit within Catherine’s budget as they are not too expensive, as her family isn’t super wealthy, especially if you make them yourself. Yes the perfect pair to Catherine and all the harrowing tales she loves to read.

Like Elinor, when Anne realizes how her father and sister are just blowing through their money, she begins to economize. And that is why when I think of what candy she would buy and eat, I think of Ghiradelli. While Ghiradelli isn’t the most expensive chocolate out there, it is classier than Hershey’s or Snickers; yet at the same time is cheap enough that it is something Anne would be willing to spend her money to snack on. It is that perfect blend that fits this once rich girl. Anne also strikes me as a dark chocolate and sea salt type of girl, of which Ghiradelli can provide.

For more Sense and Sensibility, go to A World of Teas

For more on Northanger Abbey, go to The Cambridge Companion to Jane Austen

For more on Persuasion, go to Captain Wentworth’s Diary

For more Austen posts, go to A Murder Has Been Committed on Your Property: Death Comes to Pemberley, Episode One (2013)