So I’m not a big chicken fan, but I will do my best to continue my tradition and count down by favorite rooster or chicken moments in film, TV, or books.

But before I go there, let’s talk about those born in the year of the Rooster. Roosters are trustworthy, with a strong sense of timekeeping and responsibility at work. Some famous Roosters are Donny Osmond, Dolph Lundgren, and Jennifer Lopez. Roosters are best with Oxen and Snakes; but should avoid Rats, Rabbits, Horses, and Pigs.

.So now onto the countdown. 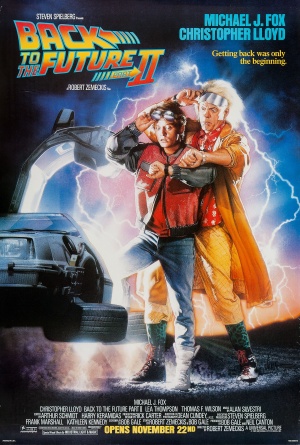 Back to the Future: Part II picks up where the first leaves off. Marty has come back to 1985, slightly altered from his time travel, and eager to continue his weekend plans. However, that all changes when he and his girlfriend, Jennifer, go with Doc to the future, 2015, to help their children. As they are occupied there, old Biff steals the time machine and using a futuristic almanac, goes to 1955 to alter the future. Now Doc and Marty must return to 1955 in order to fix their future, but things are more complicated. They must avoid their previous selves, or else destroy the entire space-time continuum.

Marty has the almanac and has completed the mission, but is stopped by Biff. Biff calls him chicken, which we know is Marty’s undoing. He goes to begin the fight, but gets himself knocked out by his earlier time traveling self. How sad and hilarious. Poor Marty!

Mr. and Mrs. Tweedy run a chicken farm in Yorkshire that is failing. Mrs. Tweedy comes up with the idea of switching from raising chickens to starting a Chicken Pot Pie Farm.

Ginger, one of the chickens, has been trying to free herself and the other chickens, with no avail. This increases as they discover what the Tweedys are planning.

Rocky, a rooster, is running away and flies into the chicken farm. They agree to hide him, as long as he teaches them how to fly. He begins the preparations, but it turns out he is a liar and cannot fly without assist from the circus cannon.

They begin building an airplane in the hopes to fly, but will the Chickens figure something out before they are turned into pies?

Best Chicken Scene: But I’ve Seen Ev’rything
When I See a Chicken Fly

The chickens are finally able to fly but it isn’t a smooth take off. 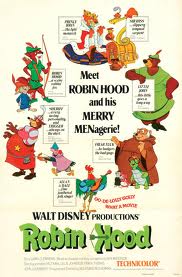 Disney has taken its hand at the classic Robin Hood, but has told the story with animals! Robin Hood, a fox, must outwit the Sherriff of Nottingham (a wolf) and Prince John (a lion). To aid him are Little John (a bear), Alan-a-Dale (a rooster), and Friar Tuck (a badger).

Alan-a-Dale is a friend of Robin Hood and tries to help him as much as he can; but even more than that Alan is our narrator and helps tell the story. Through him and his songs, we are relayed information about the characters and their situation.

For more on Robin Hood, go to Waiter, There’s Some Disney in My Jane Austen

Foghorn Leghorn is a large rooster, who’s voice and way of talking is based on Senator Claghorn from The Fred Allen Show.

Foghorn is a blustery character who is constantly fighting the barnyard dog in a Coyote-Roadrunner relationship. He also has to outwit a tiny boy chicken hawk and babysit Egghead Jr. in order to woo Miss Prissy.