It is time for our annual animated film pick! This year I am going with: 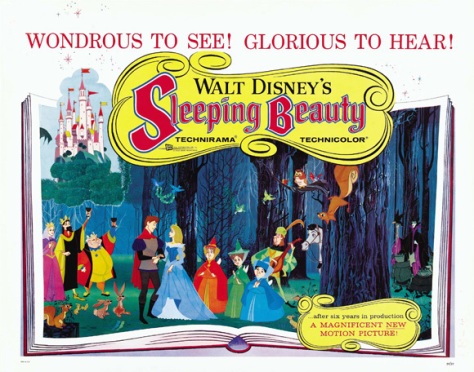 I could go on, but let’s proceed with the review.

After the King and Queen have longed for a child for so long, they are finally able to conceive. All are happy except, an evil fairy Maleficent. She curses the child to die on her 16th birthday after touching the spindle of a spinning wheel.

The fairies are able to save her by having her not die, but fall asleep. They then decide to take her away and hide her, in the hopes of outwitting Maleficent’s curse. There they live in a tiny cottage and try to forgo magic to act “normal”.

Maleficent hasn’t been able to find her and as the end of Aurora’s birthday draws closer she is more determined than ever. Prince Phillip, Aurora’s childhood betrothed, is out riding on horseback when he hears Aurora’s voice and follows it. The two meet, and Phillip falls in love with Aurora, who is actually the only Disney Princess to not fall in love at first sight but is uncertain though willing to meet up again.

However, the fairies reveal she is the princess and spirit her away to the castle before she can talk to Phillip. Through this Maleficent has finally tracked her down and sets upon her evil trap. She has Aurora fall into her 100-year-old sleep and captures Prince Phillip so he can’t wake her up.

Will the fairies be able to save her? Or is she stuck in endless sleep?

Most Romantic Moment: I Will Go Through Anything For You

So originally I was thinking about posting the Once Upon a Dream song but I was looking at a some pics I used from a previous post and realized, out of all the Disney princes I think Phillip goes through the most for his princess. I mean he wants to marry her, and if he can’t because he is a prince he has already decided that he would gladly give up the throne.

When the fairies come in and let him out of the prison he is kind of weirded out like what’s going on, but all he hears is that the girl he loves is in trouble and he springs into action. Fighting demon creatures: 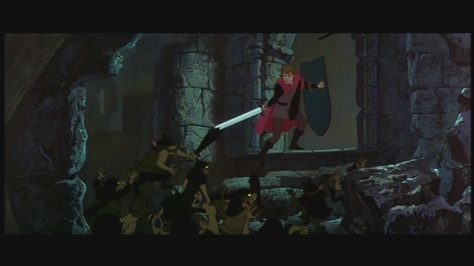 Having to push through a field of thorns:

And even fighting an evil fairy turned dragon by the powers of hell:

I mean at any time he could have turned back or gone home saying this relationship is too hard. They are asking too much of me. (Lord knows that guys in this modern time who go through a lot less say stuff like that.) But he doesn’t give up. He doesn’t stop trying. He does everything he can to save her.

For the previous post, go to I Don’t Care About Money or Class, I Love Her: Episode Three, Doctor Thorne (2016)

For more Prince Phillip, go to Waiter, There’s Some Disney in My Jane Austen

For more Disney, go to Night on Bald Mountain: Fantasia (1940)

For more fairy tales, go to Why I Still Love My Fair Godmother