Have you ever felt this way? You’ve gone through all of Austen’s books and want something more to read? There are variations on her stories, but sometimes you don’t want to read the same story. You want Austen-like works, but what to read or watch?

That’s why I started this series Non-Austen Reads for Austen Readers. In it I will review books that have things we love about the Austen novels but something fresh than a retelling. 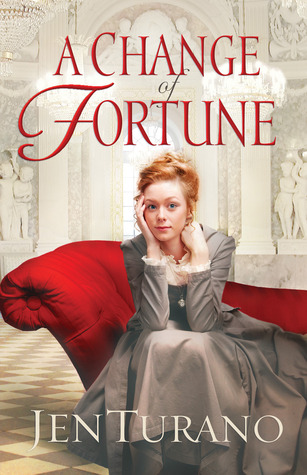 A Change of Fortune (Ladies of Distinction #1) by Jen Turano

So this story doesn’t take place in Regency England but Gilded Age America. However, it does have a few elements we love of the Austen fare.

The main character of the story is Lady Eliza Sumner, an English aristocrat who’s family fortune has been stolen and left her with nothing. To try and recapture her wealth and take revenge on her embezzler, she disguised herself and took a job as a governess as she searches for her quarry.

Being a governess can be a hard living. We all remember how it was an awful fate in Emma.

“With the fortitude of a devoted novitiate, she had resolved at one-and-twenty to complete the sacrifice and retire from all the pleasures of life, of rational intercourse, equal society, peace, and hope, to penance and mortification forever” (p. 156)

Anyways, Lady Eliza is asked to join a dinner party when one of her charges is sick and can no longer attend. There she meets two eligible bachelors who all the women wish to marry, brothers Thomas and Zayne Beckett. The Beckett brothers are after a Eugene Daniels who turns out to be working with the man Lady Eliza is searching for.

Lady Eliza, Agatha Watson (daughter of the family she is governess for) and the Becketts all have a hilarious interaction as they try to break into a house and attempt to escape the police. The women are arrested as they are thought to be “ladies of the night”, and the Becketts go rescue them.

Lady Eliza is fired from her position and stays with Thomas Beckett, his two kids, and his mother-casting off her disguise and revealing who she is. She develops friendships with Agatha and the Becketts, and all team up to try and outsmart the villains.

At first Eliza is intent on not trusting anyone, but when all try to help her and show their care for her; she starts wondering if maybe her plans aren’t the ones she needs to follow after all, maybe God has something better in mind.

So the Austen flavors, what do we have?

So Austen had Mrs. Bennet, always worrying and trying to scheme a way to get her daughters married off. In this we have twice the scheming with Mrs. Watson (Agatha’s mother) trying to throw every eligible man she can at her oldest daughter Agatha in the hope of seeing her settled. She quickly befriends Mrs. Beckett who is trying to set up her sons and daughter (even though her daughter is in another state at the moment.) While Mrs. Bennet was shrill in her cries to get her girls settled, these ladies are hilarious at the ways they scheme to settle their own.

We all know of Mr. Darcy’s famous awful proposal, what was he thinking?

We have an equally bad one on this novel when Thomas Beckett proposes to Lady Eliza stating that he wants to marry Eliza as he is “fond of her” and she will be a “good mother” to her children. Actually he does worse than Mr. Darcy, he doesn’t even really ask her to marry him, but states those things

This book is full of mystery, intrigue, although it is far goofier and sillier than Austen’s work. If you are looking for a fast read that is comedic and easily read through, with a handful of Austen elements, this is for you.

For more on lost fortunes, go to A Family Affair

For more book reviews, go to Book Club Picks: Until the Day Breaks