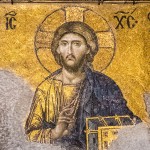 So I don’t typically talk about an image on Easter, but this year I felt like adding one in again. This image is from Hagia Sophia or Church of Holy Wisdom. The Hagia Sophia was the most beautiful church in the world, when it was finished Justinian exclaimed:

‘’Glory to God who has deemed me worthy of accomplishing such a work! O Solomon! I have vanquished thee’’

It was so beautiful that when the Ottoman Empire took over, they didn’t destroy the church but chose to instead convert it into a mosque. What is most interesting is that during this conversion different Christian imagery was destroyed but many mosaics weren’t. This is extremely unusual as pictures of faces weren’t allowed in religious spaces in the Muslim faith. But thanks to Sultan Mehmed II for, whatever reason, choosing to preserve these pieces we have our image for today:

This is a huge image of Christ, created to illustrate God’s presence and him watching over us. It is in the traditional style of the Byzantine art as it is flat and 2-D, a throwback to separate the Christian art from the Greeks and Romans.

Jesus is depicted with a halo, something that would continue to be a part of Christ images, and is older in this mosaic-stern, serious, more of the judgement of Christ to come in Revelations.

What also makes this image striking and noteworthy is that in his hand he holds the bible-showing the importance of the Gospel and his teachings. To me, looking at it reminds me of The Great Commission, Christ rising into heaven and urging his disciples to share his message.

“6 Then they gathered around him and asked him, “Lord, are you at this time going to restore the kingdom to Israel?”

7 He said to them: “It is not for you to know the times or dates the Father has set by his own authority. 8 But you will receive power when the Holy Spirit comes on you; and you will be my witnesses in Jerusalem, and in all Judea and Samaria, and to the ends of the earth.”

9 After he said this, he was taken up before their very eyes, and a cloud hid him from their sight.

10 They were looking intently up into the sky as he was going, when suddenly two men dressed in white stood beside them. 11 “Men of Galilee,” they said, “why do you stand here looking into the sky? This same Jesus, who has been taken from you into heaven, will come back in the same way you have seen him go into heaven.” Acts 1:6-11

For more paintings of Christ, go to With That, He Bowed His Head and Gave Up His Spirit

For more Byzantine art, go to Entry into Jerusalem