I have reviewed this movie before for Valentine’s Day, but decided to pick another moment from it. You can never have too many!

So The Little Mermaid is based on the fairy tale of the same name by Hans Christian Anderson (Love him). 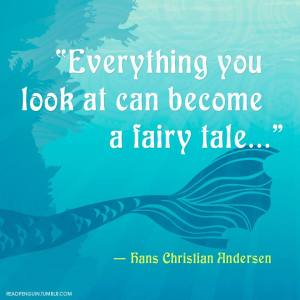 So Ariel is a mermaid, but she really loves human things. She is always collecting things from shipwrecks and going to the surface to talk to birds and see land. One night she is watching a ship that is bringing Prince Eric home. A huge storm occurs and causes the ship to be destroyed.

Ariel saves Eric and brings him to land singing “Part of Your World“.

When she gets home her father discovers her treasure trove of human items and destroys them. In typical, teenage fashion, she throws a temper tantrum and goes to see the evil witch Ursula, who takes her voice in exchange for giving her legs. Ariel has three days to get Eric to kiss her, if he does she will be a human forever- but if he doesn’t then she will turn back into a mermaid and belong to Ursula.

Ariel goes topside but has difficulties getting Eric to kiss her, as he doesn’t want to take advantage of a mute girl and is in love with the girl who saved him (couldn’t see her only heard her); along with Ursula’s lackeys getting in the way. Ursula transforms herself into a beautiful woman, takes Ariel’s voice, puts a spell on Eric, and gets him to agree to marry her. Ariel and friends are trying to stop the wedding, but will they be able to in time? Or is it too late?

Most Romantic Moment: Kiss the Girl

This is a great song and a great scene. You have the perfect atmosphere with the blue lagoon, a rowboat for two, a group singing in perfect harmony a romantic song; and to top it all off you have them in the weeping willow!

I LOVE weeping willows and find them beautiful, magical, and incredibly romantic. I love this part of the song.

For more on The Little Mermaid, go to Waiter, There’s Some Disney in My Jane Austen

For more Disney films, go to In the Spa House of the Spirits: Spirited Away (2001)