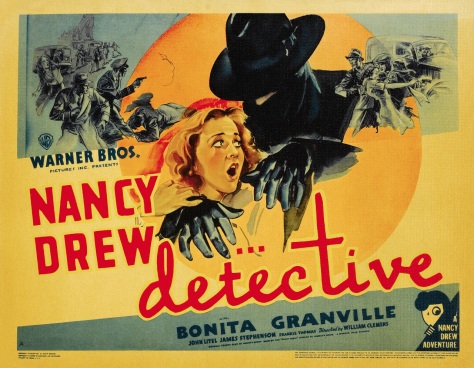 Those men are not going to stand for Nancy Drew poking her little nose into their affairs.

First saw this when I was staying in Wyoming. I was renting a room from a family and was happy to see they had cable as my family had gotten rid of it years ago. Finally I could watch TCM! 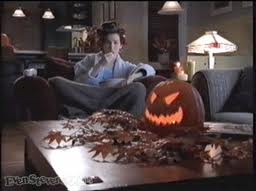 And what did they happen to be showing?  1930s Nancy Drew Marathon!

So Nancy Drew was published in 1930 and became extremely popular. The film rights were bought and movie contract for a few films starring Bonita Granville.

They do get one thing wrong instead of Ned, he is “Ted” Nickerson. Why? Don’t know. 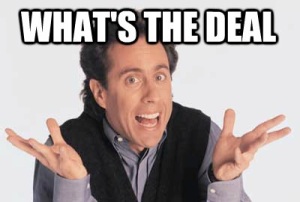 This book is based on the Nancy Drew Mystery The Password to Larkspur Lane with a few changes here and there. That’s enough background:

Nancy Drew is the chairman of the committee presenting Miss Mary Eldridge an award. Mary Eldridge is donating to her old alma mater-$250,000 ($4.4 million in today’s cash). She plans to go and sign the papers at Carson Drew’s (Nancy’s dad) office after they finish this meeting. The money is to go to a swimming pool-the girls vote.

The next day wait for Miss Elridge-planning on presenting her with a trophy. But she doesn’t come. She has ran away. 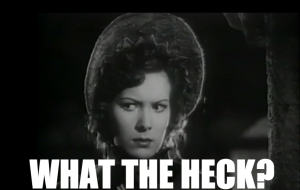 It all so odd.

The lawyer, Mr. Hollister, says that she is a hypochondriac and very eccentric. She does stuff like this all the time. Does she really?

All the ladies become angry that they won’t get their pool and turn on Nancy and Mrs. Eldridge. Nancy thinks something more serious is up and sets on to find her. 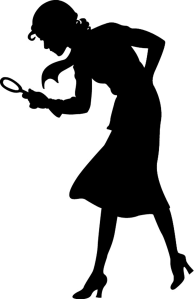 Nancy is out driving to Mrs. Elridge and spots something, in her rearview mirror: it is Dr. Spires being kidnapped! She follows the car and tries to get the license plate but it is so muddy all she sees os a “08”. She then gets a blowout and the chase is over.

Dr. Spires calls Mr. Drew leaving him a cryptic message and that he needs him to come right away.

When they get there Dr. Spires tells them his story. He was kidnapped and brought to an old house, were he was blindfolded and only saw the inside. Inside was an injured elderly woman being held against her will and he treated her hurt shoulder. They let him go but he saw nothing and knows not how to find them. All he does know is when they came to the gate one of the guards said the word bluebell. They threatened his life if he told but he risks letting Carson know.

When the Drews leave Dr. Spires, two guys are watching them and decide to follow the duo. 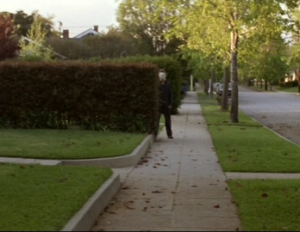 The two don’t realize they are being followed and head to the police, the two men knowing that Dr. Spires let the truth out…

Captain Tweedy, (Frank Orth), the police chief, is no real help. Nancy is much smarter than him, and Tweedy feels there is nothing he can work off on.

I love how quick Nancy’s mind it, and how sarcastic she can be. She doesn’t like Captain Tweedy and neither do I. 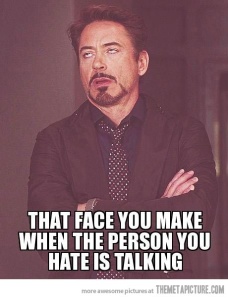 Nancy and Mr. Drew discover a car is following them and Nancy does evasive measures and tries to follow them, but Mr. Drew essentially “grounds” her from investigating. But will Nancy listen?

Meanwhile, next-door neighbor Ted Nickerson (Frankie Thomas) is practicing for football and runs into Nancy’s yard. Ted’s friend Spud Murphy comes over to speak to Ned as he found a carrier pigeon on his coop, but it isn’t his bird. He wants Ted to announce the pigeon over his radio. Nancy looks at the message and sees that it says “shoulder okay bluebells”

Nancy knows it is important evidence and leaves the bird with Ted for safekeeping while she goes to her father with the new evidence. But Dad doesn’t want her involved anymore-Dr. Spires was badly beaten, and he doesn’t want that to happen to his daughter.

Nancy returns to Ted and wants to take the pigeon to the police, but she isn’t allowed to go alone-per her father. Ted makes a coop in two seconds for the pigeon.

Now I didn’t care for the Ted character. I thought he was just mean and rude, and seemed to just be a big grump. Yuck. 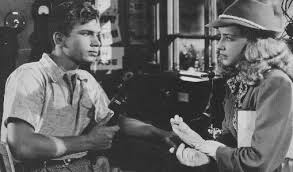 They head out and drop the coop, the pigeon flying out. Ted tries to catch it, but Nancy wants it to fly away as she wants to follow it. She’s tricky. She did it all on purpose.

They follow a pigeon to a house that is described as Dr. Spires said except for watchman. She leaves Ted there to stand watch while she calls for backup. The police arrive, full force and rush the house. But all they find is Mrs. Eldridge business partner. Hmmm….

They all turn on Nancy saying she must have imagined everything. They all head to the coop in the back to find the proof-Nancy’s pigeon. But they can’t find it and just insult her instead.

Everyone leaves, but Mr. Hollister does have the pigeon. He is writing notes and he warns his cohort that the “Drew girl” is up to stuff. 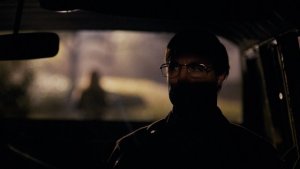 It turns out that these men kidnapped Mrs. Eldridge and want her money to go to them not the school. Mrs. Eldridge tried to get away and they dislocated her shoulder.

Nancy is embarrassed, but goes after Dr. Spires to speak to him. He describes going ovr a bridge and a gravel driveway-he was blindfolded the whole time but knows this from the sounds he heard.

Nancy realizes they went to the wrong house-Ned pointing out the pigeon was going to deliver a message. If they wanted to see where he came from they should have gone the opposite direction. They run the figures and discover the house should be by Silver Lake-right where Ted is heading the next day for a family trip.

Their musings are interrupted when they see a man trying to break into Nancy’s house-it’s just her father who forgot his key.

They try to open the door, but it won’t. It was barricaded. The look for the housekeeper and she tells them a man with a gun tried to get in earlier so she piled the furniture and hid.

The man is still in the house. He has a gun and holds them all at gunpoint and warns them to stay out of it. He then leaves. 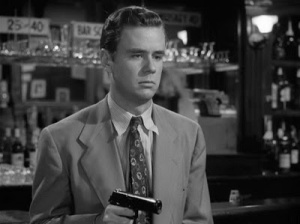 Mr. Carson plans to leave town as they have news of Mrs. Eldridge in a sanitarium in St. Louis. Nancy is shocked as that doesn’t seem right, what about Silver Lake? Nancy invites herself on the Nickerson family trip as her gut is telling her the answer lies at Silver Lake.

Up at the lake three days they have searched and found nothing. Ted wants her to give it up, but Nancy doesn’t want but then gets a note from her father that he found Mrs. Elridge. It’s over. 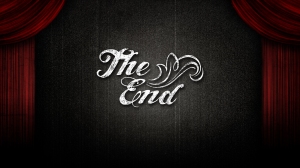 Nancy spots Mr. Hollister at Silver Lake-even though he is supposed to be with her father in St. Louis. To make it even more intriguing, he jumps into the car that kidnapped Dr. Spires.

They rent a plane and search for the house.To get in Ned dresses up as a nurse and Nancy as an old lady. When they search the home they find Mrs. Elridge. It turns out hat the night before she was to make the donation she became sick. An they took her away in a plan to steal all her money.

They try to drive off to escape but are discovered. All are kidnapped and sent back to the sanitarium.

They stick the kids in the basement and they try to find a way out of their predicament. Ted finds an old X-Ray machine, and he hot-wires it to send out Morse Code.

Meanwhile, Carson Drew is bak and very suspicious of the lawyer as things do not match up with what he had said. He goes to Chief Tweedy when they get the message from Ted.They hurry out and go on their way to find them.

The crew is taking care of loose ends, when they are loading them into the car-Ned knocks into one who drops their gun. Nancy picks it up and shoots at all the guys scaring them off until the police arrive. 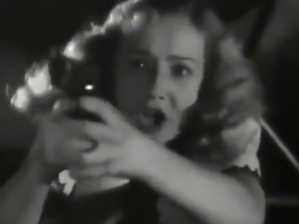 Wow. In the end all’s well that end’s well.

I recommend it, and the following films. It is extremely enjoyable.

For the previous post, go to Nowhere to Hyde: Scooby-Doo Where Are You? (1970)

For more Nancy Drew, go to A Haunting We Will Go: The Hardy Boys and Nancy Drew Mysteries (1977)

For more private detectives, go to The Murderer is Never the One You Initially Suspect: Crooked House (2017)

For more kidnapping, go to What Happened to Ally Palmer?: The Good Student (2006)