So artist José Rodolfo Loaiza Ontiveros’  came up with this idea to combine Disney characters with images we have of celebrities, calling it DisHollywood.

It deals with a lot of different cultural issues,  homosexuality, drugs, physical abuse, etc; but the pictures I was really into were the horror and disney mash-ups. 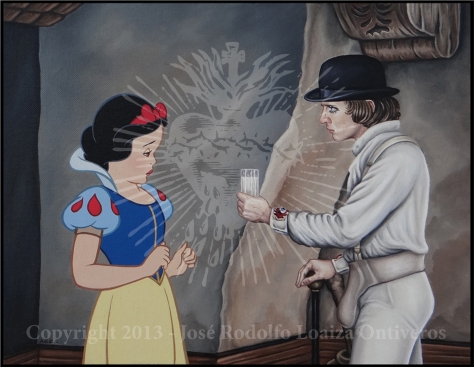 “Alex: It’s milk that make the menfolks’ mouths water. [Presenting the milk-plus to Snow White] Milk-plus like this.

Alex: Yes, but wait till you taste it, dearie. Like to try it, hm? Go on. Go on, have a sip…And because you’ve been so good to poor old Alex, I’ll share a secret with you. This is no ordinary milk, it’s magic *wishing* milk.

Alex: Yes! One sip, and all your dreams will come true.

2)The Silence of the Dwarfs 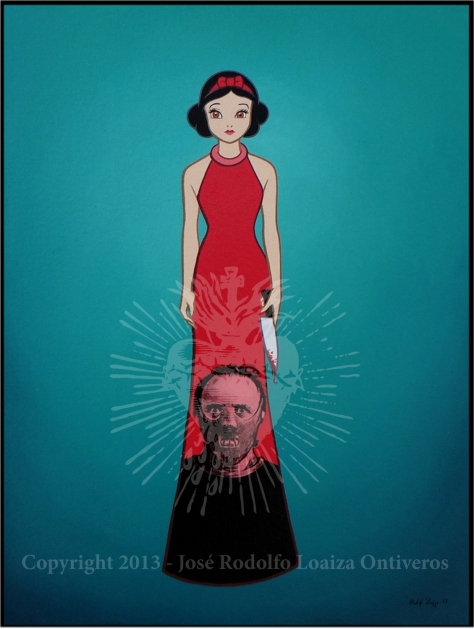 (Snow White & the Seven Dwarfs meets The Silence of the Lambs)

“Snow White: A dwarf once tried to test me. I ate his liver with some soup, bread, and a apple martini.”

Wendy: A man wouldn’t do that. 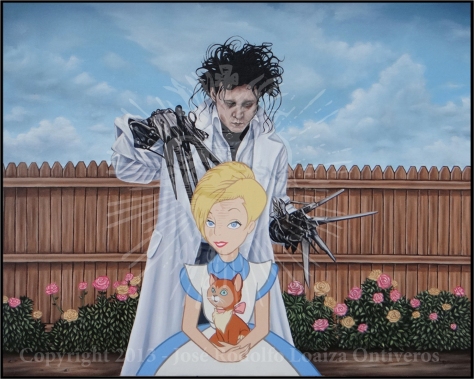 “Alice: [to Edward] Oh! Eddie, is there anything you can’t do? You take my very breath away, I swear. Look at this! Have you ever cut a woman’s hair? Would you cut mine?”

5) Snow White and the Seven Gremlins

Magic Mirror: Over the seven jewelled hills, beyond the seventh fall, in the cottage of the Seven Dwarfs, dwells Snow White, fairest of them all.

Queen: Snow White lies dead in the forest. The huntsman has brought me proof. Behold, her heart.

Magic Mirror: Snow white still lives, fairest in the land. ‘Tis a gremlin you hold in your hand.

Queen: A gremlin! Then I’ve been tricked!”

6) And my personal fav The Creature and the Little Mermaid 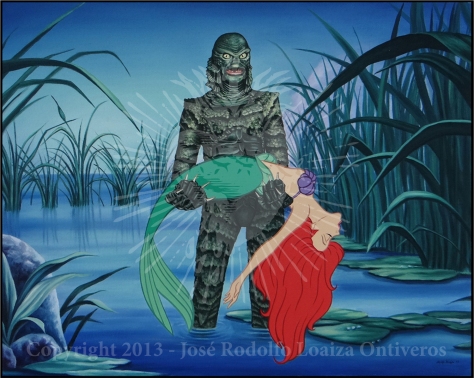 The Little Mermaid meets The Creature from the Black Lagoon

I hope you liked those. I thought they were pretty funny.