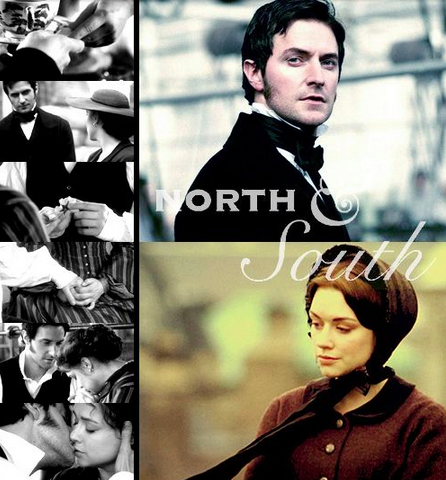 So I’ve mentioned my love of this show before. My friend introduced me to it and I fell head over heels for Mr. Thornton.

So the show takes place during the English Industrial revolution, the late 18th century. Reverend Richard Hale has decided to leave the church of England, and is forced to leave his parish in the country South, and go to Milton, in the industrial North. He brings with him his wife, and daughter Margaret.

Her father becomes a private tutor, with only one client, Mr. Thornton. Mr. Thornton was born poor and worked his way up, now owning his own cotton mill and becoming one of the richest men in the area. He’s also just how I like them:

He and Margaret get off on the wrong foot, and continually are having misunderstandings. However, as much as Margaret and Mr. Thornton say they don’t care about each other; time will tell.

Besides their relationship, there are others things clashing. The workers want more money and are threatening to unionize.  But Mr. Thornton doesn’t have more money to give them. He may be wealthy, but his money is wrapped up in cotton prices and completely dependent on how well it does: plus he bought new, pricey, technology to help the workers and doesn’t have enough profits to pay everyone what they wish. It’s a complicated issue.

Most Romantic Moment: I Love You and Want to Understand You

So the romantic moment I have chosen comes at the very end of the series. Mr. Thornton has already declared his love and proposed to Margaret.

But she has refused him because she thinks he just wants to add her to his possessions.

Since then they have had several more misunderstandings, Margaret’s parents have died, she returned to the English countryside, and the mill has been closed (with the town most likely following). Mr. Thornton has decided to journey to the South and visit Margaret’s hometown.

I know some of you probably don’t understand this. How could I pick it over Margaret saving his life or his famous “look back at me scene.”

The reason why I choose him traveling to Margaret’s old home this time around instead of the other two was because of one simple thing: he wanted to travel there because he loves her and wants to fully understand who she is. 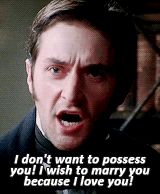 He has heard her talk about the South on and on. So he decides to travel there because he wants to finally get a view on who she is.

He has been wrong about her before, as she was about him; and has decided that the only way he will be able to convince her that he really and truly cares; is if he he goes to her hometown and learns everything he can about who she is, why she loved the South, her home, her whole culture that makes up who she is. 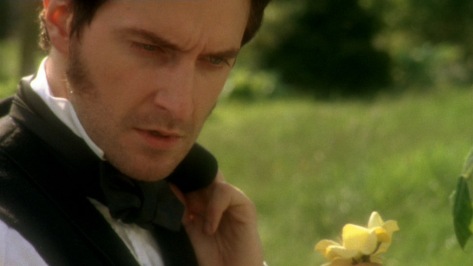 He loves her just so much that he wants to know every thing about her; from beginning to end.

To start Romance is in the Air: Part IV from the beginning, go to I Can’t Pretend I Have to Be: Casual Sex? (1988)

For the previous post, go to I’m Putting You First: How to Steal a Million (1966)

For more on North & South, go to Old Fandoms and New Fancies