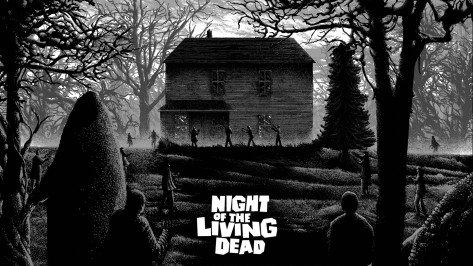 They’re coming for you, Barbara!

This is such an amazing film! George A. Romero is truly an amazing screenplay writer and director.

I actually saw the sequel first, Return of the Living Dead, on AMC’s old Friday Fright Nights, but d wasn’t able to watch the original  film until much later. The sequel is no where as  creepy as this one, and the only watchable sequel in my opinion.

One of the things that makes this film so revolutionary and a cult classic is that it is one of the first films about zombies to depict them as actual living dead and not mind control, like in White Zombie or Revolt of the Zombies. It also has the zombies being created by radiation instead of being controlled by the “third eye”.

I also love how the zombies are true zombies and not any of these super soldiers they make them to be now. The zombies are living dead, so they move slow as their flesh is rotting. They are also destroyed by fire or a shot to the head. 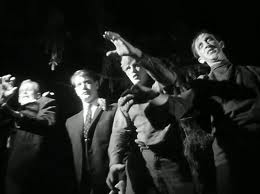 The film begins with Barbara and her brother, Johnny, going to a cemetery to put flowers on their father’s grave. While they are there, Johnny starts teasing his sister; trying to freak her out. He sees a man approaching and pretends that it is a “ghoul” after her.

The man turns out to be a zombie attacks Barbara. Johnny tries to help her, but hits his head on a gravestone. Barbara runs away from the zombie chasing her, and holes up in a farmhouse. 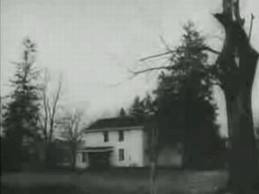 Now Barbara is extremely freaked out, but even though she is traumatized she doesn’t just sit around but  searches for a knife to protect herself. She ends up being joined by another, Ben, who stops at the house when his car runs out of gas. 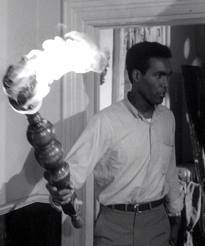 Ben is the best character in the film as he dies everything he can to keep them safe. By this time Barbara is pretty much incoherent as she has gone into complete shock.

They are later joined by others trying to escape these zombie attacks. The film switches from being just a horror film, to being a survival film. We see what everyone’s true characters are as they show how they act in intense situations.

The movie is fantastic and has a completely unexpected ending. 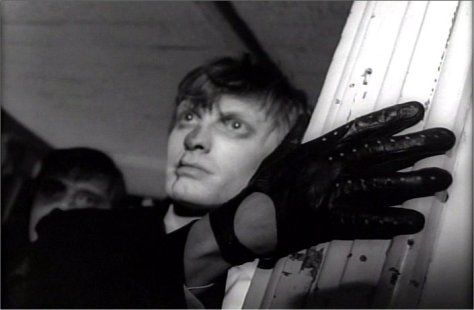 It is a wonderfully done film, with complex characters, definitely worth watching! And because of a mistake it is public domain and can be viewed on almost any streaming site along with YouTube.

That’s it for this fearsome Friday! More posts to come! 5 days ’till Halloween!

For the previous post, go to From the Sea Burning With Fire

For more on zombies, go to When Potatoes Go Bad

For more on monster movies, go to I Want Friend Like Me

For more films that spanned sequels, go to Someone Very Special 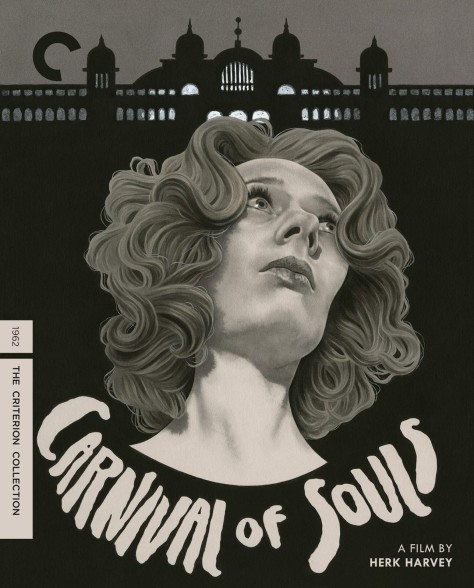 I don’t belong in the world

Carnival of Souls is a very creepy movie and it was simply fantastic! I highly recommend it for anyone out there who is into creepy films as this one really fits the bill. It was made in 1962 in three weeks on a very low budget. It was categorized as a B horror film, and due to problems with the distributing company, (it went out of business), it failed to be as big of a hit as it could have been (as it should have been). However, it is now a cult classic and loved by many.

The film starts off with our protagonist, Mary, who is out in her car driving around with her friends. They run into these guys who challenge them to a drag race, and as every young adult does in ’50s and ’60s movies, they agree.

As I’m sure you have already guessed, it does not turn out well. In fact the girls’ car ends up going right over a bridge and crashing into a river. The police spend three hours dragging the water searching for the car or the bodies, when something strange happens…… 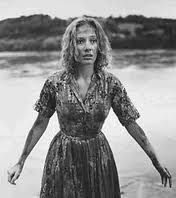 Hey guys! How ya doing?

Mary walks out the river UNHARMED! She is pefectly fine, just dirty and for some strange reason doesn’t remember what happened to cause her to escape unharmed.

However after this episode Mary isn’t at all like herself. She is colder, and wants to isolate herself. She even speaks at one time how she hates being with her parents, calling them “those people”, a feeling she had never expressed before. She packs up her things and moved to Utah where she will be an organist for a local church.

HOWEVER, this is were the film starts to get REALLY CREEPY. I recommend making sure you watch this late at night in the dark for optimal effect.

So she’s driving along on the way to this town and notices this pavillion in which she feels a connection to, but shrugs it off. She continues driving along a deserted road…everything is going great when all of a sudden……

A FLOATING FACE APPEARS IN HER WINDOW!!!!!!!

OMG this part scared me so bad when I first watched it! She’s out on this deserted road and all of a sudden a face without a body APPEARS FLOATING OUTSIDE HER WINDOW!

And this guy is no looker! He’s a majorly creepy dude! 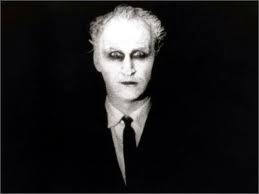 After that scare, she somehow makes it to a gas station to get directions to the boarding house she is going to stay at. She also asks the attendent about the pavilion. He tells her that it used to be a carnival.

(Okay, now we can totally tell that something creepy is going to go down in that Carnival. The anticipation is rising!!!!!)

So she gets to the boarding house where we have a somewhat comedic landlady. Mary is starting to feel better about what happened, shrugging it off as being tired and scared. The next day she visits the church and starts practicing.Everyone is touched by her lovely organ music, it is as sweet as the songs of angels!

(Now I know that organ music can be lovely to some, but to me it always makes me think of creepy monsters such as the Phantom of the Opera or Dracula.)

The minister gives Mary a ride home and she asks to see the carnival. 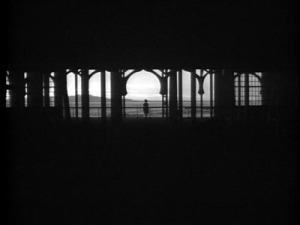 Mary returns to her new home, but is still confused as to what her connection to the place must be. Her neighbor John, tries to come on to her but with really lame lines and Mary is just not having any of it. 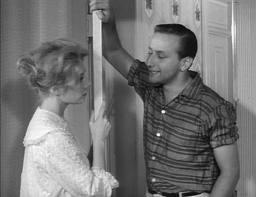 It turns out to be the landlady! And she hasn’t seen anyone walking around the house. (Hmm….very suspicious!)

The next day John tries to come on to Mary again and we find out that he reeeeeeeeeeally likes to drink. Mary is very much still uninterested and goes on to buy a new dress.

Then the strangest thing happens. Mary tries on her dress and goes out to talk to the salelady about the hem…..When NO ONE CAN HEAR HER. NO ONE SEES HER. AND SHE CAN’T HEAR ANYTHING.

She changes and wanders aimlessly through the town trying to figure out why she can’t be heard or seen or hear anything.Eventually her hearing comes back and she continues on her way.

She goes to get a drink of water from the drinking fountain when a man comes upon her…….

Luckily as Mary is running away in fear she happens to run right into a psychiatrist. 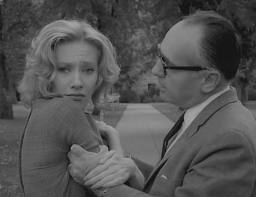 Literally. He just “happened” to be running about in that area.

He takes her to his office so that she can talk to him and they can work out what she is feeling. And what she thinks she is seeing. He tells her that the only way to truly get over these hallucinations is to go to the carnival. The carnival is where everything began. 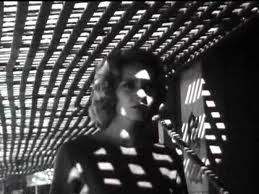 She goes and hopes that everything will be better for her. That the nightmare will be over.

The next day she goes to work and starts out playing a lovely song in the church…when all of a sudden………something comes over her and she plays devilish, creepy, horrifying music. 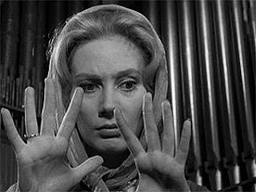 What’s coming over me?

Her hellish music causes her to lose her job, and she goes home. She ends up going out with John as she is so freaked out over what has been happening and doesn’t want to be alone. Unfortunately, that doesn’t turn out well as Mary is still so cool and icy. She has a major freakout thinking she sees the creepy guy everywhere, and John takes her home. Mary rushes into her room, with John following hoping to get lucky. She looks up in the mirror expecting to see John when who should be there but…..

Mary looks up in shock, and screams. John is also freaked out and takes off to the safety of his room.

The next day she takes her car in to be looked at, only to have another experience with the creepy guy! She runs off scared for her life; suddenly no one can see or hear her anymore. She keeps seeing creepy dead people everywhere she goes.

But just like before, everything goes back to normal. She can hear and others can hear her.

She runs to the psychiatrist’s office, so confused and upset; pouring out all her feelings and emotions to him. 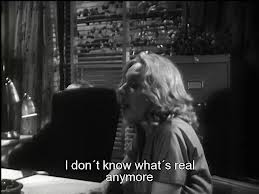 But then Mary wakes up in her car. Was it real? Was it all a dream? What is happening to her?!

She runs to the carnival, once again to try and get to where it all began, in hopes to end it all. But that is where it really gets creepy. Men and women rise from the water and they do a creepy dance of death. The dance that Mary sees herself in! 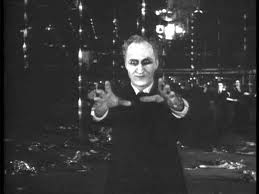 This gothic, spooky company follow her and chase her to the beach where they all grab her and everything fades to black.

The next day the minister and psychiatrist are looking for Mary. They find her shoes, footprints, and what looks like signs of a struggle on the beach, but there is no Mary to be found.

Back in Mary’s town the police have finally been able to drag the river bottoms and get the car out. 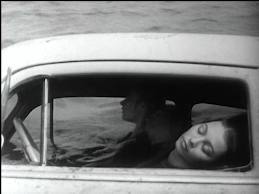 However, they are in for a big surprise as there are THREE bodies in the car. It turns out Mary’s body is in the car! 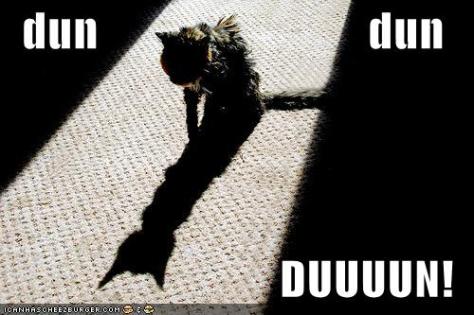 I thought it was a simply fantastic movie! Some pieces are predictable, but the creepiness lives throughout.

I hope you enjoyed the first of these posts as there are more to come.

Here is a cover page I made for my facebook as part of my countdown to Halloween: 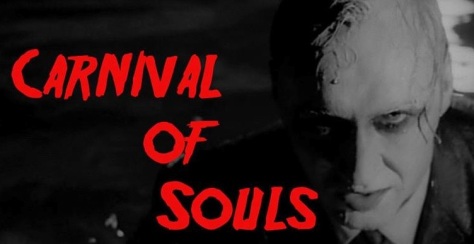 To purchase a copy, click on the image below, I do get a small amount if purchased through this link: 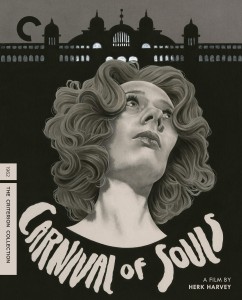