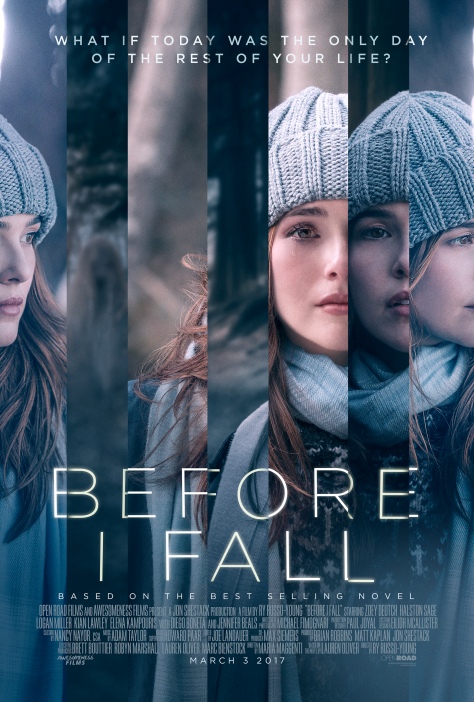 So I remember when this movie first came out and I wasn’t all that into it, although it had Zoey Deutch in it who I enjoyed in Ringer. It also had the very handsome Diego Boneta in it as a teacher. One day I was just searching through Amazon Prime, spotted it, and thought I would check it out.

Samantha Kingston is one of the most popular girls in school. She is pretty, has three great friends, has a hot boyfriend she plans to sleep with for the first time tonight, and receives beautiful flowers from a secret admirer and her boyfriend.

Samantha may have it all, but that doesn’t stop her from being mean to those who don’t. She isn’t one to instigate such things, her friend Lindsey does, but she joins in. They especially torment a girl named Juliet. Kent has always had a thing for her and invites her to his party that night, but Samantha blows him off.

That night is a party at Kent Fuller’s house, and Rob and Samantha are supposed to sleep together, but he is too drunk. Juliet storms in and the girls all get in a fight-dumping drinks on her and Juliet calling them names. She storms off. That night the girls are heading home when they hit something and crash.

Samantha wakes up and it is February 12th again, and she has a Groundhog’s Day-like experience (darn I should have posted it on 2/2) where she goes through the day all over again.

She tries to stop it with the girls having a sleepover instead, getting back at everyone she is angry with, trying to make the best day with her sister, righting wrongs-but she continues in the time loop.

Will Samantha figure out how to fix things? Or will she be trapped in the  time loop forever?

Most Romantic Moment: I Just Want to Comfort You

This moment comes about midway in the film. Samantha has been freaking out living day after day and nothing changing-either crashing again and again, or waking up again.

She has broken with her friends, is angry and upset, and when she goes to the party she decides to sleep with her boyfriend to change the outcome, to fix things, to feel better, etc. But it doesn’t work out that way. It isn’t what she wants, it makes her feel worse, and she just has a breakdown.

While Sam is freaking out, crying, and curled up in a little ball when Kent finds her. He comforts her and when she says she doesn’t want to go home, he tells her she can stay there. He gives up his bed, tucks her in, turns off the light, and holds her hand as she drifts off to sleep.

There is no clip, but you can watch it here. It is soooo romantic. He doesn’t push or prod, just tucks her in and holds her hand Awww! It just makes me go awwwwwwwww all over. Aw, Kent: