Day 16) A Disney Movie that Makes You Laugh 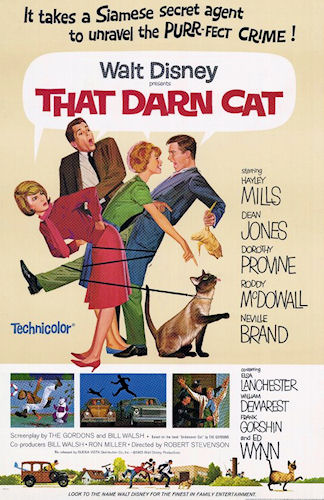 This film is hilarious!!! It is one of my all-time favorite films!

So the film is about two sisters, Ingrid (Dorothy Provine) and Patricia “Patti” Randall (Hayley Mills), and their siamese cat, D.C or otherwise known as  Darn Cat (Disney using darn in place of d****). Their parents are touring Europe this summer, leaving Ingrid in charge of the house and her teenage sister, Patti. The two leave simple lives, Ingrid works in an office and is to interested in a fellow co-worker, Gregory Benson (Roddy McDowell) who gives her free rides to work. Patti is disatisfied with her relationship with her unromntic boyfriend, Canoe Henderson. 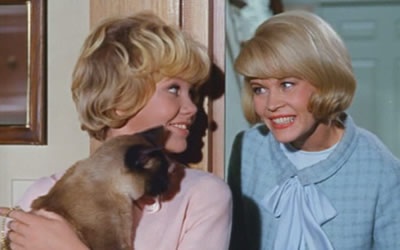 Their life changes when on their cat’s nightly rounds he discovers a new hangout. D.C. follows a man who turns out to be one of the members of a two-person bank robber team. They have kidnapped a bank teller, and holding her for ransom.

The banker teller, Margret Miller, is forced to cook for the boys, and gets an idea about a possible chance of escape. She takes her watch and starts to scratch H-E-L-P on it, planning to put it around D.C.’s neck. She is only able to do H-E-L before she is interrupted by the robbers, and sends the cat out.

Patti finds the watch and believes it belongs to the missing teller. Her sister says she has an overactive imagination, but  Patti is convinced that she found a link.

Patti then  goes to the FBI, meeting with the very handsome, Agent Zeke Kelso (Dean Jones)

Now this is when the real hilarity begins. So Agent Kelso has to treat D.C. like he would any informent, trying to get “fingerprints”, 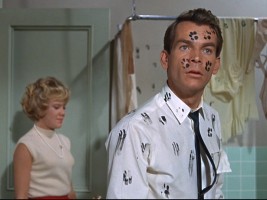 describing hair, eyes, etc.; plus he and other agents have to tail D.C, imagine that tailing a cat!!! LOL. Can you imagine that.

The hilarity continues as following a cat does not turn out well, at all. Plus their next door neighbor, Mrs. MacDougall , is a nosey-busybody that is watching the house and tries to call the cops on Agent Kelso. Benson, gets jealous of Agent Kelso and breaks up with Ingrid as he thinks she is sleeping around. As Patti and Ingrid are supposed to be keeping the whole FBI under wraps,  Canoe thinks she is cheating on him as she keeps shutting him out and doesn’t have time for him.

As Kelso follows D.C., Patti follows him, Canoe and Benson follow them, and  Mrs. MacDougall tries to follow them all. I won’t tell you how it ends, but it is AWESOME!!!!

Go here to watch it

For more on Disney, go to Diamond in the Rough

For more on Cats, go to The Cat’s Meow

For more on Roddy McDowell, go to A Twist on Wrecking Ball