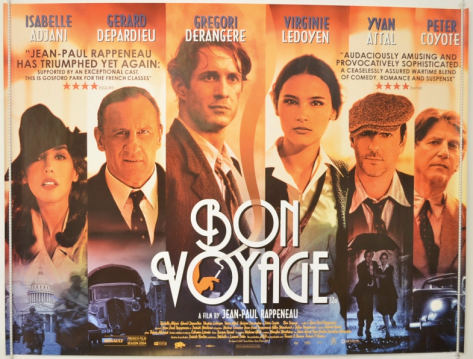 So my friend and I after waiting an agonizing few months to find out what happened next, watched High Seas Season 2 and I was sorely disappointed in it.

I was feeling bummed and reorganizing the DVDs at work and saw this one and it intrigued me with the charm that High Seas Season 1 had. I rented it and brought it to watch with my mom. 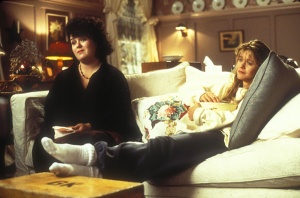 The movie is a french film with subtitles and was amazing-comedic, dramatic, had adventure, romance, etc. It is very loosely based on the true story of Professor Lew Kowarski‘s smuggling of the world’s only supplies of heavy water out of France following its occupation by the Nazis.

So the film is set in 1940 and starts off with actress Viviane Denvert at the premiere of her newest movie. It is a hit and everyone loves her, espechially Prime Minister Jean-Étienne Beaufort (Gérard Depardieu).

Viviane should be happy, but she isn’t as the producer of the film is staring at her. When she gets home he is there and he wants “payment” for all he’s done. Cut scene, if you know what I mean.

In the next scene Viviane calls her old neighbor and boyfriend, Frédéric Auger, an aspiring writer. When he arrives she tells him that the producer attacked her and fell from the second floor. She wants Auger to help her move the body, while he wants to call the police. She is afraid to have the scandal in the papers, as it was all an accident-but Auger insists they call the police.

However, Viviane is so charming she convinces him to move the body-NOOOOO!!!!!!!!!

You should have called the police! This will all end badly for you!!!!!!!!

So they put the body of the producer’s in Auger’s trunk and he is going to drive and dump it somewhere. Viviane offers to come with him, but he tells her he will handle it.

However, that night it is storming down buckets of rain and the windshield wiper breaks. Auger struggles trying to see and ends up crashing the car unto a police box, the pressure from the crash popping his trunk.

Bystanders come to help, and they find the body.

Next thing you know Auger is in jail for shooting the producer. Auger is completely flabbergasted and shocked to hear that the producer was shot. Even worse his lawyer won’t be able to help him as he is being set to the frontlines.

Time passes and the Nazis are storming Paris to occupy it, so the jail decides to move its prisoners. All of them are chained with another, and luckily Auger gets handcuffed to Raoul, a thief who has been planning an escape. They escape from the jail, and head into an empty Paris.

Auger searches for Viviane, but it turns out that she has left with her beaux, the prime minister, for Bordeaux. As she is the only one who can help clear his name, he gets on the last train and heads after her. 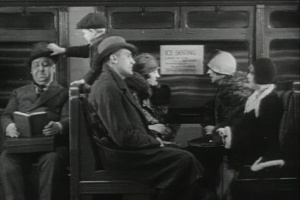 On the train Auger runs into Raoul who is also heading to Bordeaux as he has a get-rich-quick plan. Raoul has fallen head over heels, 100% in love with Camille, assistant to Professor Kopolski from the College de France. He keeps trying to get her to agree to go out with him, but she turns him down as they are headed to Bordeaux on an important mission.

But then Camille meets Auger, and she falls head over heels, 100% in love with him, but he still cares for Viviane-even after all she has done. Raoul tries to get him to see she was using him, but he is convinced that it is all a mistake.

Camille is traveling to meet up with Professor Kopolski and his other assistant as they are secretly trying to move heavy water out of France. Heavy water is what is used to make nuclear bombs and they had borrowed some from Sweden. With Hitler taking over Europe, they hope to send it and the Jewish professor out of the country to England.

When they arrive in Bordeaux, Raoul goes on to his plan to steal wine to sell and use, while Camille leaves to meet up with her associates.

Auger goes looking for Viviane who is staying with the Prime Minister Beaufort-he taking care of her and fulfilling her every whim. Right now he is in a stressful situation as they are trying to figure out what to do with the Germans-fight, give up, etc.

As Beaufort doesn’t have as much time for her-she has another man on her string, an American reporter (Peter Coyote) who is there to get a story and trying desperately to get Vivienne to run off with him.

Auger runs into Viviane, who wants to keep him a secret from Beaufort as the murder was highly publicized. She ducks into shops and sneaks away but eventually Beaufort gets jealous and follows her demanding to meet her friend. He invites him to lunch, which Auger does not want to be a part of.

Camille and the professor have been trying to speak to the prime minster to try and move the heavy water, but haven’t been able to get any time with him. When they spot Auger with him and Viviane they try to get him to help them. He tries to explain he doesn’t know the prime minister, but they don’t believe it. 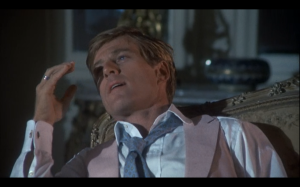 Camille reveals all about the heavy water and their need to smuggle it out to Viviane. She has fallen completely for Auger-but Raoul is in love with her.

Things get further complicated when officials try to impound the car that holds the Heavy Water: Auger goes to lunch with Viviane and Beaufort and is spotted by the nephew of the man he “murdered”; the nephew after yelling and screaming at Auger starts to wonder about Viviane; Beaufort dumps Vivienne; Beaufort will not help the professor; and one of the characters is a Nazi spy after the heavy water.

This was so good!!! It was dramatic, has action, was fun, hilarious, intense-everything you could want in a film.

For more period films, go to A Psychic Arrives and a Ghost Haunts the Ship: High Seas Season Two (2019)