So first of all 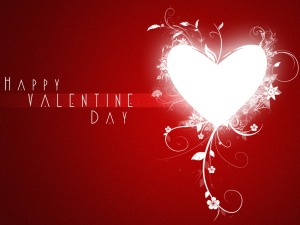 For the past two years I have ended on a Jane Austen film, but this year I was having an extremely hard time choosing which moment to use. Since it was such a difficult decision, and I was going to be away from my computer on vacation this weekend forcing me to write this all ahead of time, that meant I had to make a choice immediately. So we will not be ending this year’s finale with Jane Austen, but with one of my favorite films: 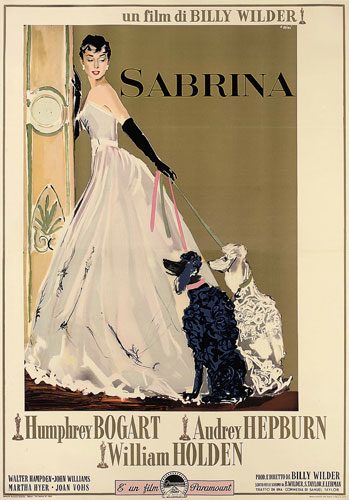 Now this is my all time favorite Audrey Hepburn film. Out of all her pieces, this is the one I could watch over and over and over again without ever getting bored. In fact I have in the past. 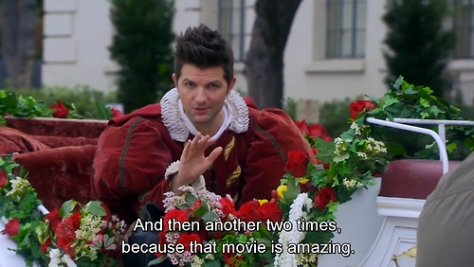 This film is amazing, although full of all kinds of drama in filming, which you can read about here, if you wish. This film was Audrey Hepburn’s second film, and the start of her relationship with costume designer Edith Head and fashion designer, Hubert de Givenchy. This film was remade in the ’90s with Harrison Ford, but besides him the film sucked and you shouldn’t watch it.

So the film starts off talking about the very wealthy Larrabee family that live in Long Island, New York. They have gazillions of dollars and their fingers are in every pot of business. Their older son is Linus Larrabee (Humphrey Bogart) who graduated from Yale, runs the family business, and has added gazillions to the family pot. Their younger son David (William Holden) like Linus, went to many fine schools but got kicked out of those very fine schools. He works for the family but doesn’t really do anything, but get married. Yep, he has already gone through three divorces: actress, dancer, and opera singer. He’s the black sheep of the family.

Anyways, the family has lots of servants, one being a chauffeur who was brought over from England, Thomas Fairchild. His daughter is Sabrina. Sabrina’s mother died at a young age and Sabrina grew up in New York living in the apartment over the garage. She became close to the servants, but was not supposed to be close to the Larrabee family. Linus of course is much older then her, but David, she has had a huge crush on David ever since she was a small child.

This night Sabrina is being sent off to a cooking school in France, the same one her mother went to when she was her age. This is also the same night that the Larrabees throw their huge Gala. That night she sees David doing what he always does, getting some girl to run off with him to the indoor tennis courts, carrying champagne, and having the band play Isn’t It Romantic?.

Sabrina is heartbroken at seeing David with another girl and having to leave him. 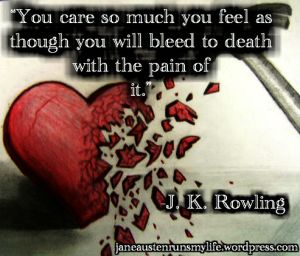 She decides that she doesn’t want to live anymore and takes off to the garage, starting every car and hoping to kill herself.

Just as she is about to lose conciousness, Linus comes in looking for a car to take someone home and saves Sabrina. He takes her up to her room and the next day Sabrina heads off to Paris.

At Paris, she fails in her cooking as she can’t concentrate on anything with her heart broken. She meets a Baron who is taking the class, and he asks her why she is unhappy.

He takes her under his wing and helps her “grow up”. Cutting her hair, helping her get more adult clothes, and sharing his love of France and the culture with her. As Sabrina spends more time with him she starts to come into her own. 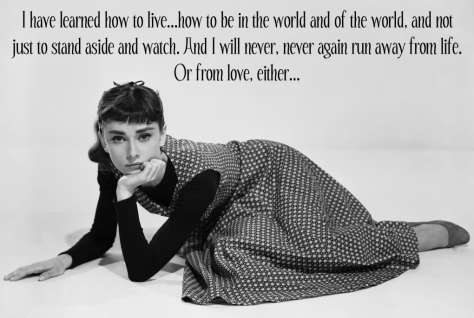 The Baron also encourages her to continue to dream about being with David.

Sabrina Fairchild: I might as well be reaching for the moon.

Baron St. Fontanel: [laughs] Oh, you young people! You are so old-fashioned. Have you not heard? We are building rockets to reach the moon!

And Sabrina decides that she will win David’s affections.

A year later, David is dating someone new, Elizabeth, and discovers that their engagement has been announced in the newspaper…even though he never proposed! This has been all arranged by Linus. Yes Linus has created a new type of plastic that is bulletproof, heatproof, freezeproof, can hold tons of weight, etc-essentially perfect. The major ingredient needed? Sugar. And who owns the most sugar plantations? Elizabeth’s father. Linus sees this marriage a key step to a merger of interests and a multitude of money. Success all around. David is still a bit miffed, but calmed down when Linus has him think about how much he likes Elizabeth and the high likelihood of him going to ask her to marry him on his own. David is relaxed and happy about marrying Elizabeth. Preparations begin.

Meanwhile, Sabrina has completed her cooking courses and is headed home. She is waiting for her father, who was detained for some reason. As she is waiting, David passes by, and comes back as he cannot resist a pretty woman. Sabrina is happy to see him, but David is confused as he can’t figure out who she is.

David Larrabee: I feel so stupid I could kill myself.

Sabrina Fairchild: You’ll be all right in a minute.

They get to the house and then he realizes that the gorgeous girl next to him is Sabrina, the one he has ignored forever! He asks her to go out with him, but realizes that night is the annual Larrabee Gala, and invites her to that instead. He keeps gushing over her, and has completely forgotten about Elizabeth.

That night Sabrina goes to the Gale, dressed in the most amazing gown. 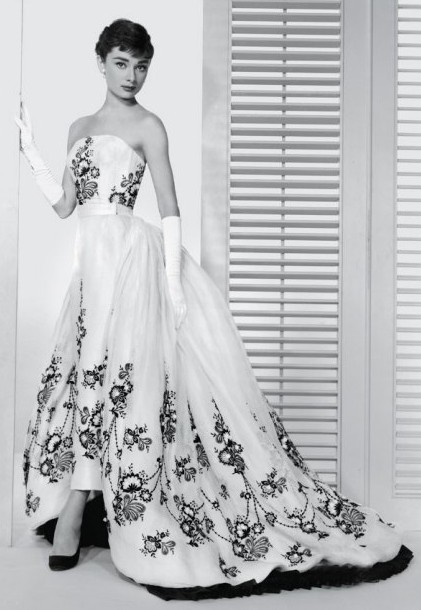 David shows her off to everybody, much to the displeasure of the rest of the Larrabee clan. Mr. & Mrs. Larrabee disapprove because of her station. Linus disapproves because of the deal he wants to make with Elizabeth’s father. As David sends Sabrina off to the tennis court and gets the music and champagne ready, he gets cornered by his father and brother.

The two try to convince David to stop what he is doing and think, but nothing can get through to him. Linus realizes this and notices something else, that David put the champagne glasses in his back pockets. Linus has him sit and crash, David is out of commission. Linus then goes off to meet with Sabrina and hopefully convince her to dump David.

It doesn’t work as Sabrina doesn’t want money. She wants David. Then Linus comes up with a new plan. He decides that he will make her change her affections, get her to fall for him, dump her, and send her back to Paris. He admits that he is older and the likelihood of it working is slim, but they don’t have very many options.

They go boating, and Linus makes up a story about how his heart was broken by a woman and made him never want to love again. His story convinces Sabrina that this is much more to him. Linus continues taking her out and showing his softer side. He also tells her that he will be leaving for Paris. With all their time together she starts falling for him.

In reality Linus’ plan was to have an extra ticket and give it to Sabrina, telling her that they will be running away together. But after the boat has sailed to France, she would go to his cabin and find flowers and an apology note. However, the more time Linus spends with Sabrina the more upset he becomes over the whole deal. He ends up giving the Fairchilds a ton of stock, buys an apartment for Sabrina, a Parisan bank account, flowers, candy, the works. But he still is sick over the whole deal.

Sabrina realizes her feelings for Linus, and beomes extremely confused as to what to do. She tries to end it all, by avoiding him, but Linus convinces her to continue their plans to have dinner together. She starts to make him dinner, but as she is looking for things she discovers the ticket. She is so excited about the whole thing, telling Linus how she loves him. Linus feels horrible and tells her the complete truth. Sabrina understands and leaves the next day for Paris. Heartbroken again. 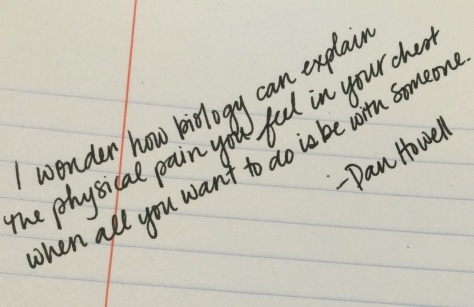 But at least Sabrina is over David. Now she just has to get over Linus. 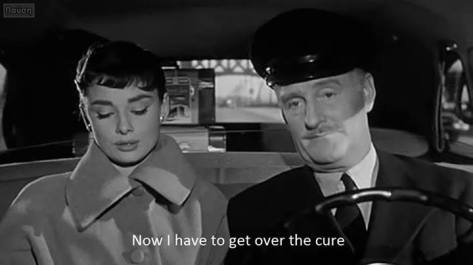 After the reveal to Sabrina, Linus has a change of heart. He decides that he cares more about Sabrina’s happiness than his own. He calls of the wedding, and has David sent over to Paris with Sabrina. All well end’s well, right? Wrong.

As Linus is about to make the announcement that David and Sabrina has run off together, David walks in. David tells Linus that he realized that Sabrina no longer loves him. When Linus realizes that Sabrina is going to be all alone, he takes off. He loves her and has finally come to the conclusion that he can’t live without her. 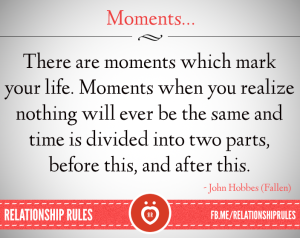 He goes running off to be with her. Throwing away buisness, money, everything he has ever loved and cared about as he realizes that there is someone much more important. 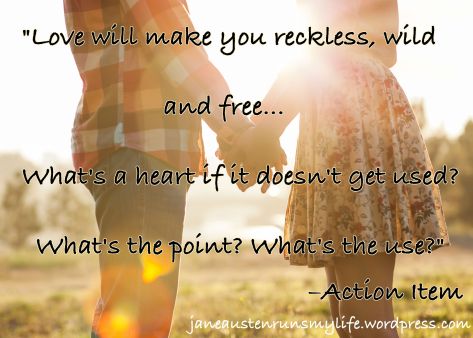 And it ends, happily ever after.

So romantic! I just love this movie!

So that ends this year’s Romance is in the Air:Part III. I hope you all have a great Valentines Day, whether you are single or in a relationship. Watch romantic flicks, eat candy, and just enjoy your day. 🙂

For the previous post, go to I Choose You: Miss Pettigrew Lives For a Day (2008)

For more on Action Item, go to Good or Bad

For more on Dan Howell, go to Fantastic Fantasies

For more on J.K. Rowling, go to Heaven on Earth