Just finished a reading Emma and Mr. Knightly is so awesome! He is kind, caring, and it is so romantic how he is willing to give up his only chance for true love and happiness because he thinks he isn’t right for Emma. He travels through any element to be by Emma’s side; he’s better than the post office.

Mr. Knightly is also wise, an excellent judge of character, and the best Austen detective. After all he is the one to figured out who sent the piano and what Frank Churchill was hiding.

He is also the voice of reason, able to stop arguments, and calmly resolves any problematic situations. For example; when there is a fear of being snowed in at the Westons, the canceling of Box Hill, or how to be able to marry Emma but not take her away from her father.

Mr. Knightly is also the perfect gentleman. He cares for Mr. Woodhouse (through both real and hypochondriac ailments), makes sure that Mr. Weston is protected from John Knightly’s vicious tongue; along with insuring that Mr. Woodhouse has plenty to occupy himself with during any party, so that Emma can have time to enjoy herself.

He is also willing to give up his home, routine, being head of the house, and move in with the Woodhouses; so that Mr. Woodhouse and Emma won’t have to be separated, nor Mr. Woodhouse’s routine be changed.

He also uses his carriage to pick up Miss Bates and Jane so that they don’t have to walk in the cold. He is always thinking of others. How caring and sweet is that!

One of the things I really love about the Mr. Knightly and Emma relationship is how comfortable they are with each other. Since they were friends first, they can really talk to each other along with teasing. As most of the other novels show the romantic leads meeting for the first time near the beginning of the novel, they don’t have this same kind of closeness. And the books that have the same kind of history between their main leads, have other situations standing in the way of them having this type of relationship.

And like all Austen men, besides a having a great personality, strong sense of character, and being kind to others; he is also handsome and has a “tall, firm, upright figure…”

And while he might not think so, he is also an amazing dancer. One of my favorite parts:

“Whom are you going to dance with?’
‘With you, if you will ask me.’
‘Will you?’
‘Indeed I will. you have shewn[sic] that you can dance, and you know we are not really so much brother and sister as to make it improper’
Brother and sister! no, indeed” 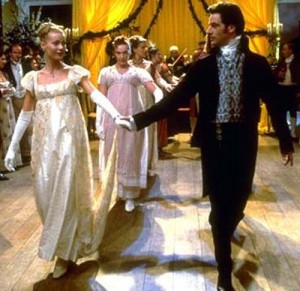 I agree when Emma says that he  is “superior..to every other being upon earth…” (Or at least any being in this novel 😊)

I simply LOVED the end of the novel! He gives such a great proposal!

“My dearest Emma…for dearest you will always be, whatever the event of this hour’s conversation, my dearest, most beloved Emma…”

“Within half an hour, he had passed from a thoroughly distressed state of mind, to something so like perfect happiness, that it could bear no other name.” 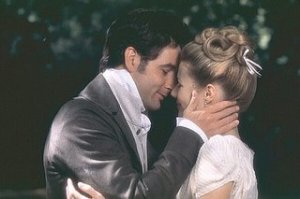 “She was his own Emma, by hand and word, when they returned into the house; and if he could have thought of Frank Churchill then, he might have deemed him a good sort of fellow.”

Before I read Emma, I had just seen the films and while I liked Mr. Knightley (I mean who wouldn’t); after reading the book I fell head over heels in love with him. Now he is one of my main Austen men.