Hey everybody, for this year we are doing something special: Sleuthing Sundays. Each Sunday I’ll post a film with a super sleuth! Our third film is: 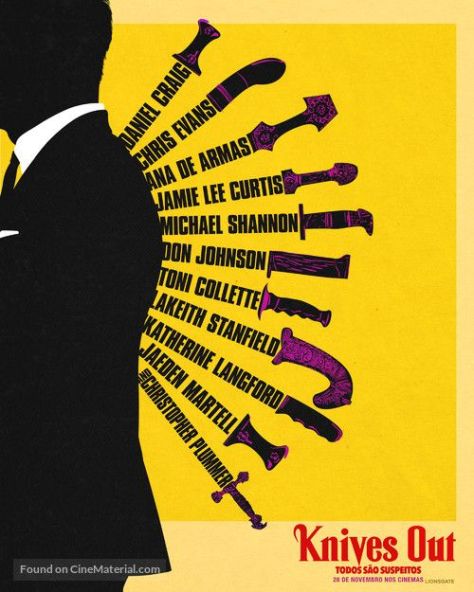 It’s a weird case from the start. A case with a hole in the center. A doughnut.

So this was the first post I wrote for Horrorfest IX. I wrote it waaay back in January 2020, ah a more simpler time, when I was trying to get ahead. I usually try to do at list one post a month so I have nine ready when October rolls around to give me a little extra time in the month.

So back in January 2020, my friend called me up about wanting to hang out and I agreed. Last time we went to her place so I wanted to reciprocate with mine, but I had been working on Valentine’s Cards and had paper everywhere and a mess.

To hide this I suggested going to the movies, (remember when we could do that?), and she agreed saying she had wanted to see Knives Out. 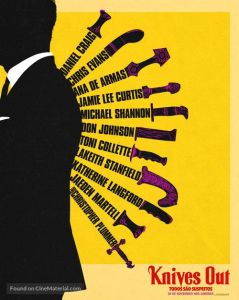 I heartily agreed as I love mysteries and the trailer made me think of those old Hercule Poirot and Miss Marple films from the ’70s.

We went and saw it and I really enjoyed it, although there was one thing I did not like. The whole film from the text, color choices, decor, costumes, hairstyles (talking about you detectives with those sideburns) etc-evoked a late 1970s vibe to it, but it was set in modern times. It was extremely jarring to be watching and having all your senses set you in 1970 and then someone whips out an iPhone or talks about instagram. I think it would have been a bit better if they had just set it in the 1970s, but that’s just me.

I also didn’t like the vomit parts, but other than that I really enjoyed this film and have already seen it three times this year.

I also like how his had no romantic pair or love angle. It was refreshing to have the main characters just be about something else, than to have them get together in the end.

So the film starts off with a big birthday party for the family patriarch, Harlan Thrombey (Christopher Plummer). He invited his whole family and his nurse, but the next day is found dead-throat slashed.

Lt. Elliot (Lakeith Stanfield) and Trooper Wagner (Noah Segan) are called on the scene and believe it to be suicide, (the Trooper is one of my favorite characters as he fanboys over all the Thrombey books), but then world renowned private investigator, Benoit Blanc (Daniel Craig) appears saying that he was delivered a note and cash, so he is here to investigate.

Each person is taken aside and questioned, all having a motive-but which one did it?

Linda Drysdale (Jamie Lee Curtis) is the eldest daughter and built a real estate company from the ground up (not really as she got the money from her dad). She was told that she would no longer receive any money and neither would her spendthrift son, Ransom (Chris Evans). She says she doesn’t care about herself or her son being cutoff, but is she lying? Could she kill him to protect her young?

Richard Drysdale (Don Johnson), Linda’s husband is cheating on her and Harlan caught him. If Linda divorces him, he’ll have nothing (he signed a prenup). Could he have killed him to keep it a secret?

Hugh Ransom Drysdale (Chris Evans) was told by his grandfather that night that he was to be written out of th will. The two argued and he didn’t return until the will was read. Did he secretly return and kill him to protect his inheritance?

Joni Thrombey (Toni Collette) is the widow of Harlan’s middle son. She is famous on instagram and is a lifestyle guru. She has the followers, but still relies on Harlan to meet the cost of bills and day to day living. She’s been cheating him by getting twice as much money having the accountants give her her daughter’s college fees, while Harlan also pays straight to the school. He told Joni he was cutting her and Meg off. Did Joni kill him to keep the money?

Megan “Meg” Thrombey (Katherine Langford) found out about hr college fund being cut off. She also left and when she returned was seen to go straight to her bedroom. Could she had killed him so she could continue her schooling?

Walter “Walt” Thrombey (Michael Shannon) is the youngest brother and in charge of his father’s publishing company. He is fired from the company as Harlan wants his son to be free to be his own person. Did he kill him to keep control and have the money? (This out of all the people I actually feel bad for. Where is he going to get a job now? How is he going to start over at his age?)

But P.I. Benoit Blanc believes that something is missing. He continues to search and forces nurse, Marta Cabrera, to join him on his investigations…but Marta ended up killing him when she switched his accidentally gave him the wrong medication. Harlan kills himself to protect her. So she is helping Blanc solve the murder she committed…oh no.

I also love the white sweater that Ransom wears. It makes me think of the one Rod Taylor wears in The Birds. 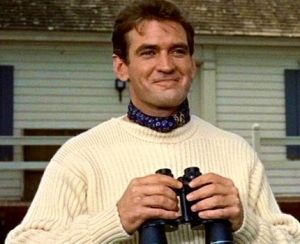 The best part of the film, besides Trooper Wagner, was Craig’s character-Private Detective Benoit Blanc.

I could happily watch film after film of his character. I hope they make a sequel with him.

I liked the plot-but I did figure out the ending. Things just didn’t sit right with me of what they showed. I was whispering to me friend, when Blanc said the doughnut line and I was like, yes! That’s what I was thinking!!

Benoit Blanc: I spoke in the car about the hole at the center of this doughnut. And yes, what you and Harlan did that fateful night seems at first glance to fill that hole perfectly. A doughnut hole in the doughnut’s hole. But we must look a little closer. And when we do, we see that the doughnut hole has a hole in its center – it is not a doughnut hole at all but a smaller doughnut with its own hole, and our doughnut is not whole at all!

But it was great, and every time you watch it there is more that you pick up on. Like the symbolism of Go and the way Marta plays it becoming important later. There is more, so if you haven’t watched it yet-you should.

For more Michael Shannon, go to Do You Ever Feel Like Your Life Has Turned into Something You Never Intended?: Nocturnal Animals (2016) 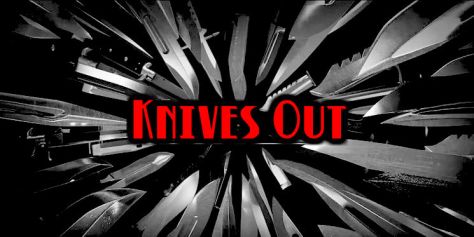