Now I know that some of you may not be football fans, but I love the sport. I don’t normally post something for it, celebrating it, but I felt that this was Super Bowl 50 I just had to.

I decided that I would approach it in a way I’m not sure anyone has done before, if Austen heroes were real, alive today, and fans of American football (or in some ways at least semi-interested). Here are my pairings of teams with the characters.

So Edward Ferrars doesn’t strike me as a real sportsy guy, so I think he would be a Saints fan just because of the name.

Their theme song is of course, The Saints Go Marching in, another point with Ferrars.

So unlike Edward, Colonel Brandon is a sporty guy. I almost went with the panthers as it would be a connection to his time in India, but settled on the Buffalo Bills. The Buffalo Bills are reminiscent to the cowboy and Native American age, along with the mighty Buffalo. I thought this fits perfectly with Colonel Brandon’s bravery, expedition, and love of the exotic.

As the team has never won a Super Bowl, and are underdogs; they also appeal to Colonel Brandon. After all the sadness he has encountered, and how he has a soft spot for those who have obstacles thrown in their dreams, he would be a faithful fan until the end.

Their theme song is Shout, and while I don’t see him as someone who would dance or get into it; he’d be a secret hummer or singer.

Super Bowl Trivia: They are the only team to go to four consecutive Super Bowls.

Elinor is quiet, reserved, not one to show her emotions or be picked out of the crowd. That’s why I chose the Tennessee Titans as I have never heard of them.

Super Bowl Trivia: After the changed their name to the Tennessee Titans they went to the Super Bowl.

For more on Elinor Dashwood, go to The Sense and Sensibility Screenplay and Diaries

Marianne has a lot of emotions, likes to share her feelings and thoughts, is impulsive, at times brash, and doesn’t care what others think of her. That makes her perfect for being a fan of the Raiders. All Raiders fans, myself included, intensely feel for their team and even though others may make fun of us we are fans until the end.

The Raiders used to be in Los Angeles, but were returned to Oakland; that move from a big city to a smaller one is something Marianne can also relate to as she was forced to move when her father died (entailment sucks).

Super Bowl Trivia: Against all odds, the Raiders beat the Philadelphia Eagles in Super Bowl XV.

For more on Marianne Dashwood, go to It Doesn’t Exist

A man like Mr. Darcy is someone of old money and societal standing. Therefore I think he would pick a team that is well established. As the Chicago Bears are one of the oldest teams in the league. Originally created in 1919 in Decatur, Illinois as the Decatur Stanleys; they moved to Chicago in 1921 and in 1922 changed to the Bears.

The Bears have won nine NFL Championships and one Super Bowl and hold the NFL record for the most enshrines in the Pro Football Hall of Fame and the most retired jersey numbers. The Bears have also recorded more regular season and overall victories than any other NFL franchise.

For more on Mr. Darcy, go to The Confession of Fitzwilliam Darcy

I’m not quite sure why Elizabeth would be a fan of the Seahawks, it just seemed right. Maybe it’s because they aren’t as established, having been formed in 1971, yet not the newest team on the block. It might also be because they are a Western team, and anything established in the West is seen as a lesser pedigree as the East.

Super Bowl Trivia:They are the first and only, post-merger expansion team in NFL history to play in consecutive Super Bowls.

For more on Elizabeth Bennet, go to The After Party

Edmund is all about believing he can change the people he loves, such as Mary Crawford. That is why the Cleveland Browns are perfect. They have never won a super bowl, but that won’t stop a fan like Edmund who will never stop believing.

Super Bowl Trivia:They have never gone to the super bowl.

For more on Edmund Bertram, go to On the 10th Day ‘Til Christmas: Merry Christmas from the Austen Novels 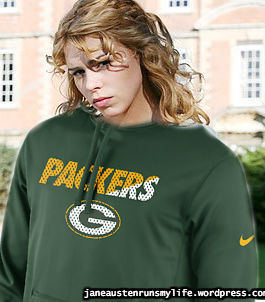 Fanny is from a humble home, moving to her rich relatives; and later showing that her heart and character surpasses everyone else. I thought her perfect match was the Green Bay Packers. Started as a “small town team”, named after the meat packers, and have become one of the best teams in the league (although the color scheme is horrible).

Super Bowl Trivia: The Packers won the first two super bowls, the trophy being named after Vince Lombardi the Packers head coach of the same name, who guided them to their first two Super Bowls.

For more on Fanny Price, go to Opening With… 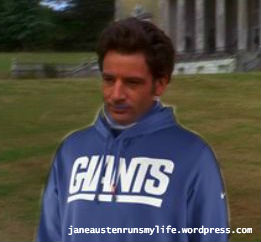 The New York Giants were established in 1925, the only team created then that is still in existence. With it’s pedigree and being ranked third, it seemed like Knightley’s top pick.

Emma doesn’t strike me as a football team, but if she had to root for one I think it would be the Arizona Cardinals. They have a huge pedigree as they were established in 1898 in Chicago, moving in the ’90s to Arizona.

Super Bowl Trivia: Their 2008 super bowl was the first time the franchise ever played in the Super Bowl

For more on Emma, go to We Wish You a Merry Christmas

The New York Jets are one the first teams established as part of the American Football League (AHL). That pedigree matches with Mr. Tilney as he too comes from an old, established family. I also think he would have fun singing lyrics from West Side Story;

They kind of plays in with his jokey moods.

Super Bowl Trivia: In Super Bowl III they beat the Baltimore Colts and solidified the AFL in professional football.

For more on Mr. Tilney, go to The Cambridge Companion to Jane Austen 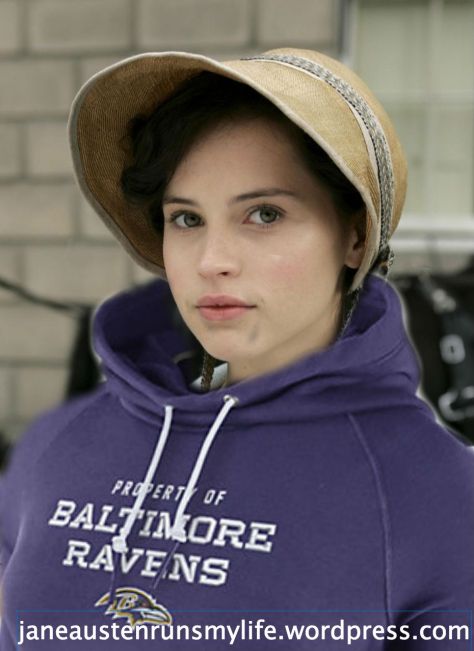 First of all, out of all the Austen female characters, Catherine would be the most likely as a football fan. Grew up as a tomboy, probably loves the sport. So there is only one reason why I picked this team, as Catherine is a huge fan of Gothic Romance and fiction; she would love a team that is based of the Gothic writer, Edgar Allen Poe.

Super Bowl Trivia: They are currently the only team in the NFL to hold a perfect record in multiple Super Bowl appearances

As a current member of the military, it is clear that he would choose the New England Patriots, although he wouldn’t agree with all their dirty tricks.

Super Bowl Trivia: They have eight super bowl appearances, tying with three other teams for the most appearances of all time.

For more on Captain Wentworth, go to A Fredrick Wentworth Sighting 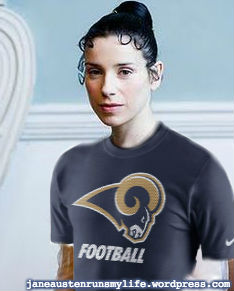 The Rams didn’t start out in Los Angeles, but if you meet any diehard Rams fans that is all they talk about, and how they need to come back. They are waiting and hoping for that decision. That type of perseverance of hope and patience made me think of none other than Anne Elliot, the woman who waited and waited for her love to return.

And just like Anne was rewarded by receiving the man of her dreams again, so will the Rams fans as they are coming back to LA.

For more on Anne Elliot, go to Fall for You

For more Austen Mashups, go to Waiter, There’s Some Disney in My Jane Austen

For more on Pride & Prejudice, go to Darcy’s Story: Pride and Prejudice Told from a Whole New Perspective

For more on Mansfield Park, go to Let’s Hear it For the Boys

For more on Northanger Abbey, go to It’s All Jane Austen’s Fault

For more on Persuasion, go to A Bit Pottery About Jane Austen

For more Friday Night Lights, go to What a Fanatic!