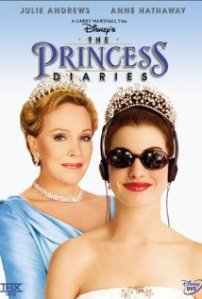 The Princess Diaries is based on the series by Meg Cabot, and is actually a very good representation of the books. Of course there are some things that I think the book did better, and others things that I felt the movie changed were better; such as Michael not being 18 while Mia 14, her grandmother being nice and humane, and that she and Michael end up together. Anyways, I highly recommend both.

The Princess Diaries is the story of Mia (Amelia) Thermopolis, an almost 16 year old living in San Francisco with his single mom and artist. She is not the coolest person in school, and is invisible to many, especially to her crush Josh. Mia’s only friends are the equally unpopular Lily, and Lily’s brother Michael, who unbeknownst to Mia has a crush on her. Her grandmother, who she hardly ever talks to, is coming over from Europe to visit. When she gets there she tells Mia that Mia is a princess and the sole heir for the throne. Mia freaks out and is angry with both her mom and grandmother, but agrees to go to Princess Lessons and make a decision when they have the Genovian ball. She learns how to dance, have excellent posture, get a makeover, etc. Around this time Michael gets up the courage to ask Mia out and she agrees. Everyone finds out that she is a princess, and suddenly everyone wants to be her friend. Josh invites her to a beach party the same day that Michael asked her out, and she trades Michael out for Josh. Josh and his ex both humiliate her at the party, but her grandmother tries to cheer her up. Mia tries to fix her relationship with Lilly and Michael, but Michael is still hurt about Mia ditching her. Mia has to do a speech about her acceptance or refusal, but freaks out and runs off; still unsure of what decision to make. She finally decides to become the next ruler of Genovia, returns to the ball, gives a killer speech, and dances the night away with Michael.

So after Mia disses Michael, leaving him for jerky Josh; Michael is heartbroken and hurt. He really liked Mia for who she was and didn’t appreciate being friendzoned. Mia realizes what a great guy Michael is and tries to invite him as her date and make it up to him, but Michael is still upset (understandable) and turns her down.

So Mia will not just let that be, she feels so bad about everything and wants to make it up to Michael. Plus, she realizes that she really, really, really likes him and can’t let him go. I wouldn’t want to let him go either he’s  smart, plays the piano, a mechanic, etc. Plus he’s SUPER HOT!

He is so great! I love him. Anyways…I digress.

It’s so cute and romantic. I think this is one of the best ways to ever apologize for something, I mean it is on par with holding a boom box over your head or serenading someone. Not only did she do a huge romantic move, but she made sure that she got him his favorites how thoughtful!

Not to mention to make this even better, Michael checks out the pizza, checks his watch, and then hurries to get ready so that he can be there for her.

That Pizza Box is referring to him. One HOT guy!