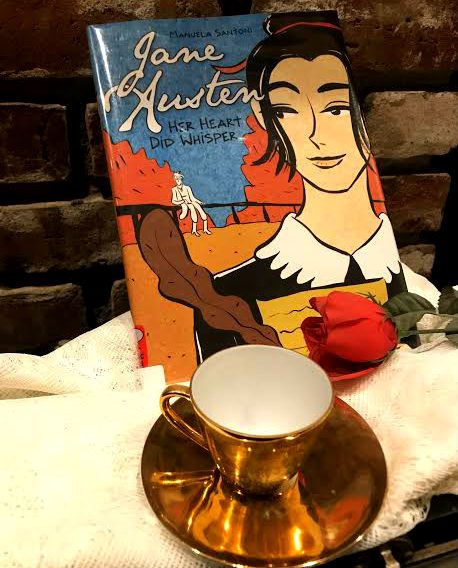 Jane Austen: Her Heart Did Whisper by Manuela Santoni

So we added this at the library and I was jazzed for it-Jane Austen biography? In graphic novel?

I’ve read several Jane Austen biographies, books and online, and I really enjoyed read Just Jane last year. I do not know everything about Jane, but I feel enough to know that this had quite a bit of historical inaccuracies it.

It also felt like they wanted to make her “ahead of her times” but it just feels like something we have seen before and not as if the author really was trying to show Jane, who this book is supposed to be about. Like how Nostalgia Critic words it in the Alice in Wonderland review. 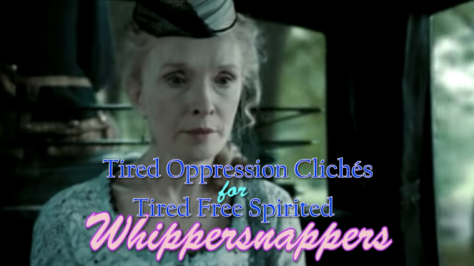 It starts off with Jane sick at the end of her life writing a letter and thinking back on her life.

We go back to them as girls and Jane hates the piano playing:

But in reality, she enjoyed piano playing. From The Jane Austen Centre:

“Jane, studied with the respected composer and organist, William Chard well into her twenties, long after most girls would have given up their lessons. After that point, it was up to the student to progress if she wished, on her own. Jane owned a small piano at various times during her life and, when this was not an option, rented one. She played for her own enjoyment and would rise an hour before the rest of the family in order to get her practicing done.”

And Santoni has her hate doing embroidery:

But she was extremely talented at it, most likely loved it. From Jane Austen’s House Museum:

“Like all women of her time and class, Jane Austen learnt to sew in childhood and gained a life-long skill. Sewing was something she was particularly good at. In 1796 Austen wrote in a letter that she was “the neatest worker” of a group making shirts for one of her brothers. Edward Austen-Knight remembered of his aunt that “Her needlework both plain and ornamental was excellent, and might almost have put a sewing machine to shame. She was considered especially great in satin stitch.”

And I am currently reading Praying With Jane: 31 Days Through the Prayers of Jane Austen by Rachel Dodge and she shares this in Day 5:

“From this description, we see that while Jane sat and worked (needlework) quietly, lines, descriptions, and plot ideas for her novels came to her in delightful bursts.”

“She [Jane Austen] could have declared needlework a boring, repetitive task and herself too intelligent for such menial jobs. Instead she appears to have spent the time in happy reflection.” 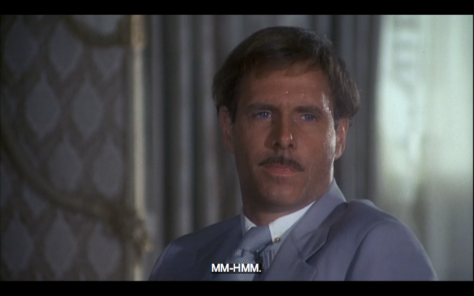 I am so sick and tired of authors being like, oh I want my historical character to be modern and powerful so she will hate embroidery. Why? Why is music revered, painting treated as a superpower, sewing something to be proud of-but embroidery is treated like dirt. Embroidery is a lot of hard work, amazing art, and takes blood, sweat, and sometimes tears to create. 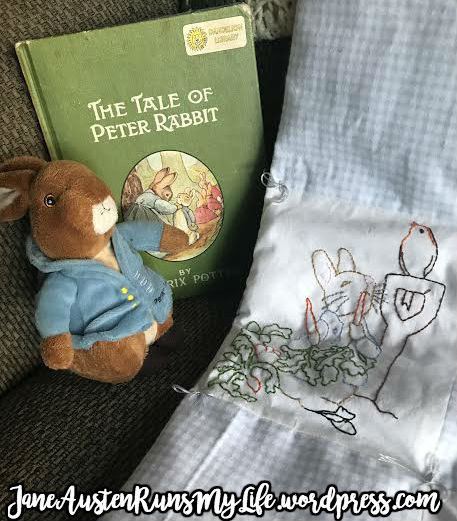 Santoni gives Jane unruly curled hair that just seems to show again that she is “modern” eschewing society’s idea of how women should be.

So the story has Jane proposed to twice and she turns them both down, but in real life she only officially ever received one formal proposal, when she was 27, from Harris Bigg-Wither-but the next day refuses him.

Santoni also has Jane fall in love with Tom Lefoy, he propose, she accepts, and then turn him down as she can’t be a wife and mother but has decided to be a writer. Now there is a bit of leeway here as Cassandra Austen destroyed a lot of Jane’s letters, but she seems to ignore what history we do know.

It even says at the end of the book “many suitors asked for my hand…” I found this hard to believe as there is no historical proof to confirm this, along with the fact that she had no dowry and very little to entice someone to marriage. I felt like did Santoni do any research? She says she is a Jane Austen fan, but it seems she was making up her own story and characters.

Yeah, not as good as Just Jane.