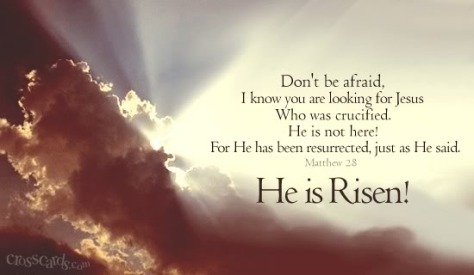 So I don’t usually talk about an image on Easter, but this year I felt like adding one in. The image I choose for today is Risen Christ by Michelangelo. This is one of Michelangelo least favorite works as things went wrong from beginning to end. Michelangelo had a large ego, and when commissioned to create this piece proudly stated that he would complete it on four years. But the first thing to go wrong, was the marble he was carving turned out to be defective. A large dark streak ran through the middle of it, and all over what was to be the face of Christ. Another had to be ordered and shipped.

It was eventually completed in 1521 (three years after the promised date) and Michelangelo’s assistant Pietro Urbano installed at Santa Maria sopra Minerva in Rome. Urbano also did a finish to parts of the sculpture that were unwanted by Michelangelo.

Later on, during the Baroque period, the Christ sculpture was covered with a bronze loincloth and the hands were pierced to represent his death on the cross, even though Michelangelo specifically wanted to leave that out. But, even with all that happening; this sculpture is still incredibly beautiful.

Michelangelo always liked to show the spirit of the figure, rather than how they would look in real life. When he did David, he made him a strong, muscular man to represent the warrior spirit and strength of faith he had. With Pietá, he made Mary look not the age of a mother of a 33 year old, but instead having her look as young as when and heard that she would be the mother of Christ. 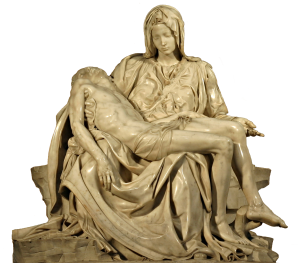 With this sculpture, Michelangelo has decided to make Christ not as he was on the cross-injured, beaten, scarred, etc. Instead he wants to show him in a perfect glory, strong, body complete, perfect, etc. With this he is showing how all will be in heaven-strong, complete-no matter what our appearance was in the physical world, our spiritual body will never be destroyed or have any thing wrong with them.

“Therefore we do not lose heart. Though outwardly we are wasting away, yet inwardly we are being renewed day by day. 17 For our light and momentary troubles are achieving for us an eternal glory that far outweighs them all. 18 So we fix our eyes not on what is seen, but on what is unseen, since what is seen is temporary, but what is unseen is eternal.” 2 Corinthians 4:16-18

Michelangelo also has a great use of contrapposto and as always, pays a close attention to detail in hair and muscles.

Michelangelo also gives Christ the symbols to hold, the cross and a staff. The cross representing the sacrifice that he performed to save us all, and the staff to show that he the great shepherd to guide us as we follow him.

For more paintings of Christ, go to At Noon, Darkness Came Over the Whole Land…

For more on Michelangelo, go to Viva Las Vegas

So happy Good Friday everybody. This year we have looked at very different mediums; a photograph, woodcut, and now a sculpture.

This piece is the Pietá by Michelangelo. He did this piece when he was extremely young, in his early twenties, and it shows his genius at sculpture. Even though Michelangelo could paint and sculpt, he never thought of himself as a painter. He always said that he saw the things he wanted to make in the marble, that it was alive and spoke to him; all it wanting was to be freed. 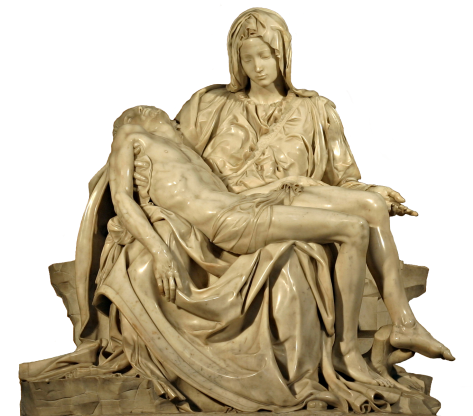 This piece is amazing. First of all it is not proportionate and Mary is too young; but Michelangelo wanted to create the essence of the person rather than the actual, realistic self. So let’s talk first about Mary.

We have the youthfulness of when she was told by an angel that she would be the mother of Christ. She is distraught at the death of her son, that she is holding his body in her lap.

Her body os much larger than Jesus’ is as to mimic the way the mother could hold a small child, their baby; which even though Jesus is an adult he is still her baby. Mary’s stance also mimics the way that mother’s would give birth in that time, the birthing stool. So in birth and death she is with her child. 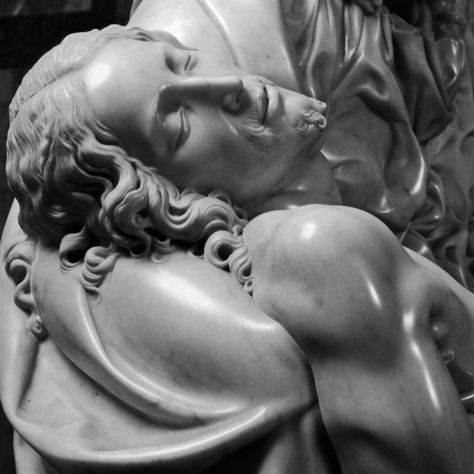 In his face we see no life in him, but that he died with a smile on his lips. He has fulfilled the plan of God and the great sacrifice; to save us and have us reign in heaven forever.

Also look at his body and hair, not to mention the folds of his clothes. They just look so real. As if they are two people under a cloth rather than carved out of marble.

Many people didn’t believe that Michelangelo created such an advanced piece of art, so he went back and signed his name in a large script. This is one of the few pieces to bear his signature.

“One of the criminals who hung there hurled insults at him: “Aren’t you the Messiah? Save yourself and us!” But the other criminal rebuked him. “Don’t you fear God,” he said, “since you are under the same sentence?  We are punished justly, for we are getting what our deeds deserve. But this man has done nothing wrong.” Then he said, “Jesus, remember me when you come into your kingdom.”  Jesus answered him, “Truly I tell you, today you will be with me in paradise.”–Luke 23: 39-43

“At noon, darkness came over the whole land until three in the afternoon. And at three in the afternoon Jesus cried out in a loud voice, “Eloi, Eloi, lema sabachthani?” (which means “My God, my God, why have you forsaken me?”)… Someone ran, filled a sponge with wine vinegar, put it on a staff, and offered it to Jesus to drink.”–Mark 15: 33-36

“When he had received the drink, Jesus said, “It is finished.” With that, he bowed his head and gave up his spirit.”–John 19: 30

“At that moment the curtain of the temple was torn in two from top to bottom. The earth shook, the rocks split and the tombs broke open…When the centurion and those with him who were guarding Jesus saw the earthquake and all that had happened, they were terrified, and exclaimed, “Surely he was the Son of God!”–Matthew 27:51-54

“So as evening approached, Joseph of Arimathea, a prominent member of the Council, who was himself waiting for the kingdom of God, went boldly to Pilate and asked for Jesus’ body…Joseph bought some linen cloth, took down the body, wrapped it in the linen, and placed it in a tomb cut out of rock. Then he rolled a stone against the entrance of the tomb.”–Mark 15: 42-46

For more Good Friday posts, go to The Lamentation of Christ

For the previous painting, go to The Arrest