As you all know Easter is approaching, so here is another post chronicling Jesus’ journey to the cross. I know not all of you believe in Christ, but as a mentioned earlier not only am I a Christian but I like to celebrate holidays. So to those of you who don’t mind reading this, enjoy! 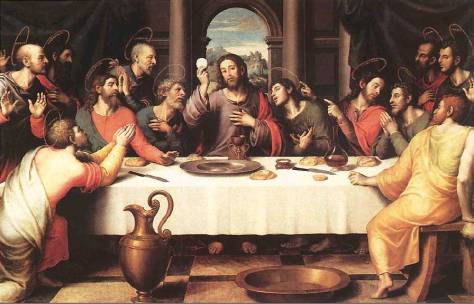 This painting of the Last Supper (1590)  is by the spanish painter Juan de Juanes. This painting is similar to Leonardo in how all the disciples are gathered around Jesus, instead of having one (Judas), on the other side. All the disciples are reacting as well. They are focused on Jesus, their expressions connecting to what he is saying.  This painting is also grouped in threes, as Juanes sections the group into 1)the two to the far left at the table and one kneeling on the floor, 2)the three on the left of Jesus which includes white bearded Peter, 3)the three on the right of Jesus which has John the Beloved, and 4) the two standing to the far right and Judas sitting down. You can spot him from the way he clenches the money pouch and doesn’t have a halo.

This one has a lot of big differences from other Last Supper scenes. Unlike da Vinci’s Last Supper, which focus on the one scene of Christ announcing to the disciples that he will be betrayed, this image combines three different moments in one image, 1)Washing of the Feet, 2)The Betrayal Announcement, and 3)Communion. Before everyone sat down to eat, Jesus washed the feet of the disciples. The water bowl and jug in the foreground symbolize this, so you remember to be humble just as Jesus was. Everyone around the table are up in arms and upset over Jesus’ announcement, the only one not doing so is Judas, as he has already planned the betrayal. Then if you look at Jesus in the center he has the communion wine and bread, the Eucharist.

Now what is interesting about the Eucharist, is that instead of bread and wine like other paintings, it is the communion bread and glass that are served in modern times of Communion. Making the connection stronger between the original event and modern day.

“On the first day of the Festival of Unleavened Bread, when it was customary to sacrifice the Passover lamb, Jesus’ disciples asked him, ‘Where do you want us to go and make preparations for you to eat the Passover?’ So he sent two of his disciples, telling them, ‘Go into the city, and a man carrying a jar of water will meet you. Follow him. Say to the owner of the house he enters, ‘The Teacher asks: Where is my guest room, where I may eat the Passover with my disciples?’ He will show you a large room upstairs, furnished and ready. Make preparations for us there.’ The disciples left, went into the city and found things just as Jesus had told them. So they prepared the Passover. When evening came, Jesus arrived with the Twelve.”–Mark 14: 12-17

The evening meal was in progress, and the devil had already prompted Judas, the son of Simon Iscariot, to betray Jesus. 3 Jesus knew that the Father had put all things under his power, and that he had come from God and was returning to God; 4 so he got up from the meal, took off his outer clothing, and wrapped a towel around his waist. 5 After that, he poured water into a basin and began to wash his disciples’ feet, drying them with the towel that was wrapped around him. 6 He came to Simon Peter, who said to him, “Lord, are you going to wash my feet?” 7 Jesus replied, “You do not realize now what I am doing, but later you will understand.” 8 “No,” said Peter, “you shall never wash my feet.” Jesus answered, “Unless I wash you, you have no part with me.” 9 “Then, Lord,” Simon Peter replied, “not just my feet but my hands and my head as well!” 10 Jesus answered, “Those who have had a bath need only to wash their feet; their whole body is clean. And you are clean, though not every one of you.” 11 For he knew who was going to betray him, and that was why he said not every one was clean…Do you understand what I have done for you?” he asked them. 13 “You call me ‘Teacher’ and ‘Lord,’ and rightly so, for that is what I am. 14 Now that I, your Lord and Teacher, have washed your feet, you also should wash one another’s feet. 15 I have set you an example that you should do as I have done for you. 16 Very truly I tell you, no servant is greater than his master, nor is a messenger greater than the one who sent him. 17 Now that you know these things, you will be blessed if you do them.

“Jesus was troubled in spirit and testified, ‘Very truly I tell you, one of you is going to betray me.’ His disciples stared at one another, at a loss to know which of them he meant. One of them, the disciple whom Jesus loved, was reclining next to him. Simon Peter motioned to this disciple and said, ‘Ask him which one he means.’ Leaning back against Jesus, he asked him, ‘Lord, who is it?’ Jesus answered, ‘It is the one to whom I will give this piece of bread when I have dipped it in the dish.’ Then, dipping the piece of bread, he gave it to Judas, the son of Simon Iscariot. As soon as Judas took the bread, Satan entered into him. So Jesus told him, ‘What you are about to do, do quickly.’ But no one at the meal understood why Jesus said this to him.  Since Judas had charge of the money, some thought Jesus was telling him to buy what was needed for the festival, or to give something to the poor.  As soon as Judas had taken the bread, he went out.”–John 13: 21-30

“While they were eating, Jesus took bread, and when he had given thanks, he broke it and gave it to his disciples, saying, ‘Take and eat; this is my body.’ Then he took a cup, and when he had given thanks, he gave it to them, saying, “Drink from it, all of you. This is my blood of the covenant, which is poured out for many for the forgiveness of sins. I tell you, I will not drink from this fruit of the vine from now on until that day when I drink it new with you in my Father’s kingdom.”–Matt 26: 26-29

For more of my musings, go to CANDY TIME!