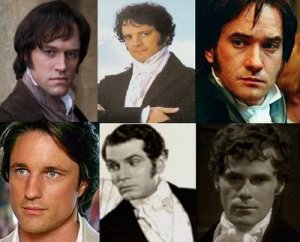 The many handsome men who have played Mr. Darcy

Last night I dreamed I went to Manderly…

Just kidding! 😀 Last night as I dozed off to La-la-land, Mr. Darcy decided to make a pit stop and visit me along the way.

Anyways, in my dream last night Mr. Darcy appeared. Not very unusual you might say, as many women dream of him with his face being one of these above choices. But to me I found it odd as:

Usually if Darcy makes an appearance in my dreams he never comes as a modern man. Must be watching too much Lizzie Bennet Diaries or something. ( I heavily recommend the Lizzie Bennet diaries as I felt they are doing a wonderful job.)

So Mr. Darcy, a Bill Gates/Steve Jobs technology emperor, was visiting me. Apparently we had mutual friends. I had to clean my whole house as I knew Mr. Darcy would be insufferable making fun of anything he feels that is tacky or beneath him. I also spent hours preparing the perfect meal, so he couldn’t make any comments about it being lowbrow. However, he had already had his change of heart and was trying to be kind to me:

When my niece wakes me up asking me to make her  breakfast and play barbies.

I spent the whole dream working, that when I woke up I felt even tireder than before. Aw, but such is life!

For more of my dreams, go to Krueger Town

For more on Pride and Prejudice, go to Flirting With Disaster

For more on the Lizzie Bennet Diaries, go to It is A Truth Universally Acknowledged…