So I asked this question on Instagram and got a zero response. I feel that this had a lot of potential so I’m going to answer it myself.

So I haven’t read every adaptation yet, I plan to, but haven’t yet. Out of the ones I have read these are one that I would love to see as a film or TV Show. 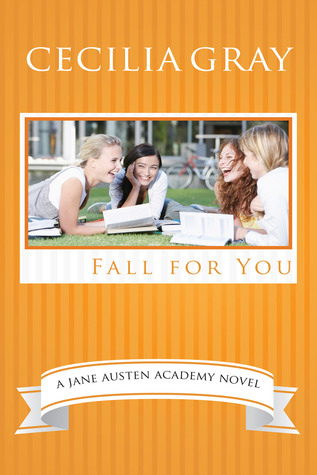 So in this Jane Austen inspired work, Cecilia Gray takes the characters of Jane Austen’s novels and puts them in a boarding school high school together, pairing up who would be friends and having them live in modern times. She chose the characters Elizabeth Bennet, Elinor Dashwood, Emma Woodhouse, Catherine Morland, and Anne Elliot.

The drama comes when this boarding school goes co-ed! Gasp! Mr. Darcy, Mr. Wickham, and Captain Wentworth are coming and bringing all their dramas and the new owners want to change everything. Elizabeth has to save the school, help Anne get back with her love Wentworth, and deal with ugh Darcy.

So I have only read the first book (and need to continue the series, but just haven’t had a chance) and I like the idea-although there were a few things I didn’t agree with (like deleting Marianne Dashwood, why?) that would need to be fixed. I think this would be a good TV show-all the Austen characters as teenagers going to school together and unlike Austentatious, this book if turned show would actually keep the themes from the books instead of making it random nonsense.

For more on The Jane Austen Academy Series, go to Fall For You 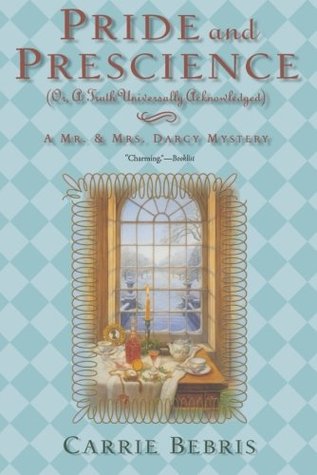 So Mr. Darcy and Elizabeth are married and happen upon stranger supernatural occurrences and start investigating-well, Elizabeth does and Darcy starts off along for the ride but joins in. In the first book they deal with the question of an insane or possessed Caroline Bingley. Has she gone mad? Is her husband gaslighting her? Or could she be posessed? In book two, Elizabeth’s sister, Kitty Bennet, is planning on marrying Henry Dashwood (John and Fanny’s son) but then he starts acting weird. Was he just pretending to be a nice guy and always a jerk? Or is he possessed by some malignant creature?

Elizabeth and Fitzwilliam Darcy are crimesolvers? I’d watch it hands down. It would be something for those who loved Death Comes to Pemberley and Supernatural. Sounds like a win-win and can fill a new hole on TV.

For more Mr. and Mrs. Darcy Mysteries, go to Pride & Prescience (Or a Truth Universally Acknowledged) and Suspense & Sensibility (Or First Impressions Revisited)

3) The Darcy Monologues and Dangerous to Know edited by Christina Boyd and et. al 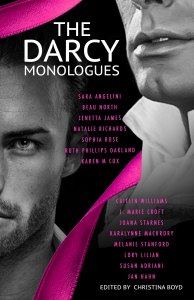 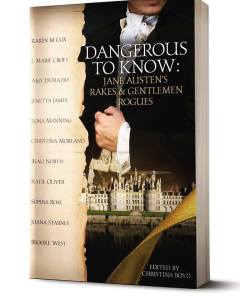 So in The Darcy Monologues you have Pride and Prejudice envisioned fourteen different ways. Dangerous to Know: Jane Austen’s Rakes and Gentlemen Rogues is eleven different stories on the “bad boys” of Jane Austen.

So I still have to read Rational Creatures (I know shame on me, time just seems to slip away), but I think these would both be fun as a TV show, each story an episode. As The Darcy Monologues is about one subject you could do an episode from it and Dangerous to Know, to break it up, or just do a miniseries. I would love to see Mr. Darcy as the “Beast”, Pride and Prejudice as a Western, and of course Mr. Darcy Strikes Out as I LOVED Dandy Darcy and would love-love-love to see that. For Dangerous to Know I loved Henry Tilney’s older brother finding love and needing help from Catherine Morland, and when Colonel Fitzwilliam strikes a deal with an heiress to pretend to be interested in her so she can gain her inheritance.

2) Midnight in Austenland by Shannon Hale 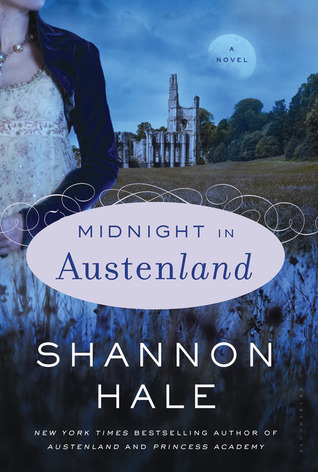 I Love, Love, Love, Love, Love this book. We all loved the film Austenland, so why not turn the sequel into a film as well!! You have a broken hearted woman who loves Jane Austen and heads to Austenland to get over her troubles. There she sees characters from the previous book along with getting mired in a mystery!!!

It is a love story, a mystery, comedy, etc and so much fun. It wouldn’t quite work with how they ended the film Austenland, but you could always have Mrs. Wattlesbrook make a new one and try again. It would be FANTASTIC!! Please make it happen.

For more, go to Midnight in Austenland 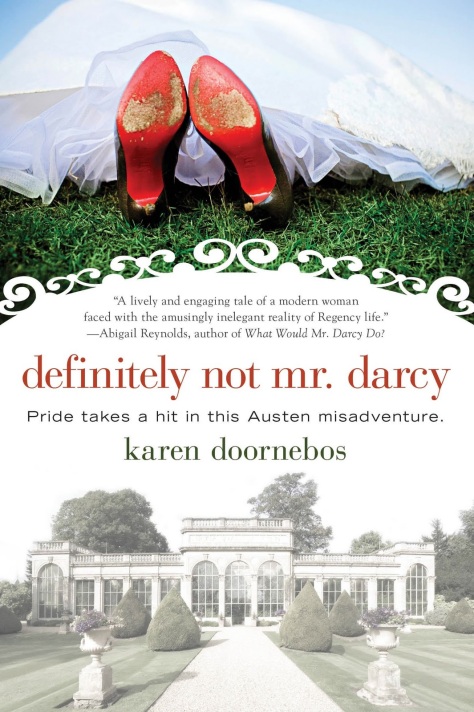 Chloe Parker enters a contest to compete in a documentary about Austenites. Each contestant will live in a Regency-esque world where they will compete in answering Austen Trivia-the winner receiving $100,000. It’s easy right? Wrong! It turns out that this is a Bachelor Reality Show in Regency Flair, all constants competing to win a “Mr. Darcy”.

I could see this being a movie, but even better as a TV Show. You make it in the style of a reality show, but all fake. It would be hilarious as they try and complete the Austen challenges while poking fun at real celebrity dating TV Shows.

For more go to, Definitely Not Mr. Darcy

So what do you think? Did I miss anything? Is there something out there you would love to see as a TV show or Film? Comment below to let me know!

Pride and Prejudice was first published  in 1813, marking this year the 200th anniversary!

Now many there are many fandoms out there and in which the people convene, talk, dress as their favorite characters, create fan-fiction tales, etc. Some of the more known ones are Star Wars, Star Trek, Supernatural, Sherlock, Lord of the Rings, and Doctor Who; but none of these are anywhere near as well known, talked about, continuously recreated in film, book, clothing, memes, etc as Jane Austen. Face it, us Austenites have been around a long time and we are all pretty crazy. 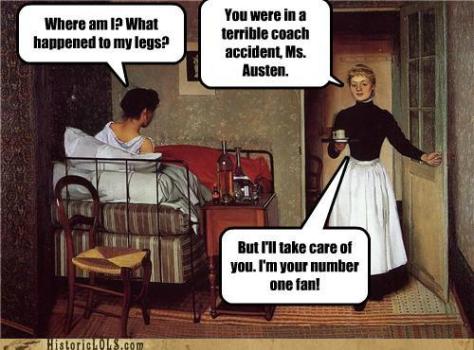 And out of all of her amazing works which is the most loved, fantasized, recreated, and inspirational to other films/books/movies?

You guessed it Pride & Prejudice 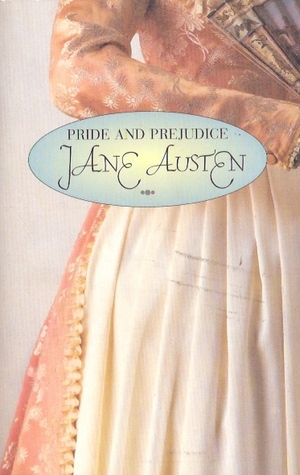 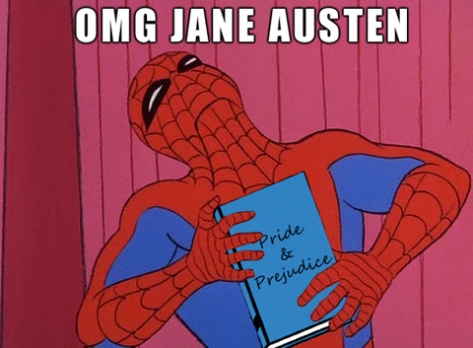 This is so me

When a group of us Austenites get together and start discussing the books and the movies and we hear that someone hasn’t read it, we all are shocked and disappointed. 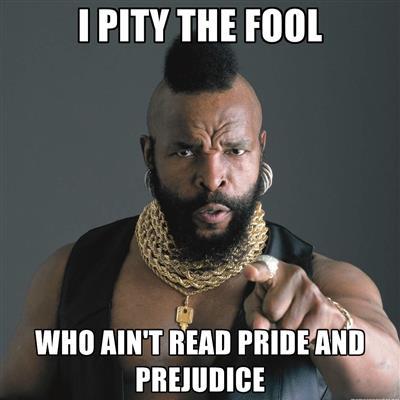 It is a testament to how awesome Jane Austen is that her work is still compatible to today’s times. It is so easily relatable, and she has clearly stood the test of time. 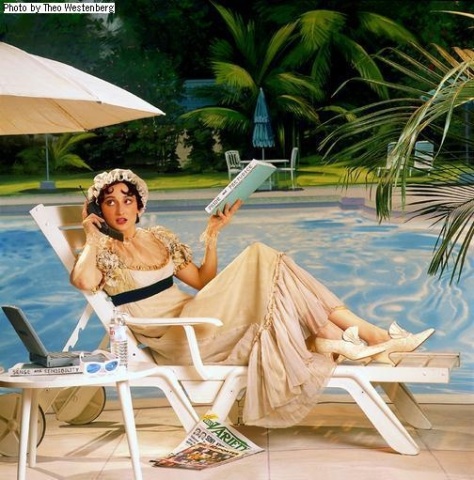 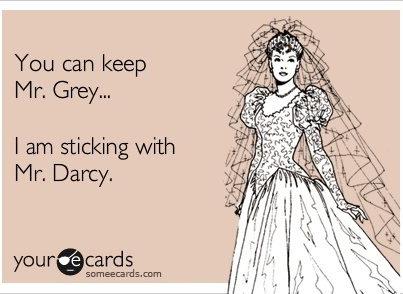 I mean even in a culture where bad writing has become popular reads (for example Twilight and Fifty Shades of Grey) Pride and Prejudice still reigns supreme. 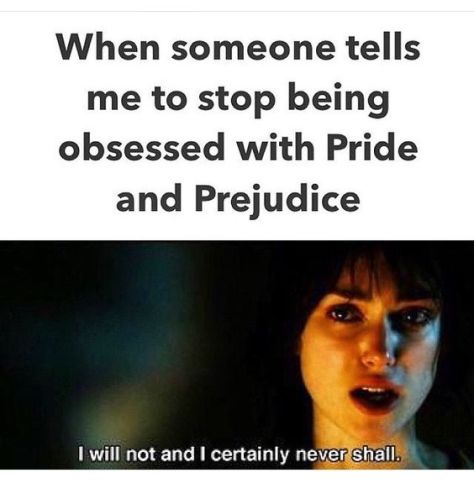 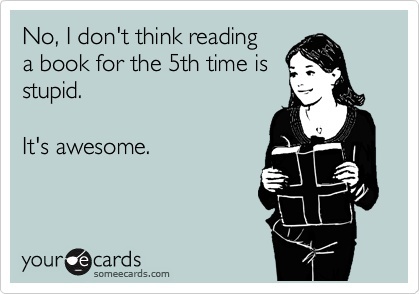 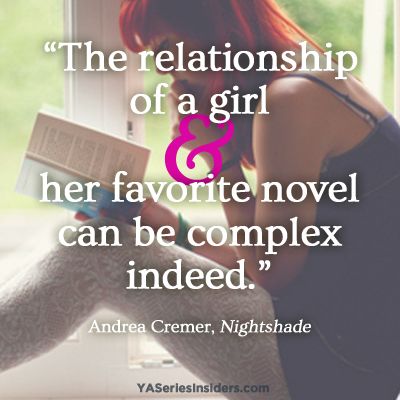 I also will be reviewing the books, films, musicals, etc that are based on Pride and Prejudice. So if you are a fan, I am pretty sure you will enjoy these posts, if not-sorry but Jane Austen is in the web address. 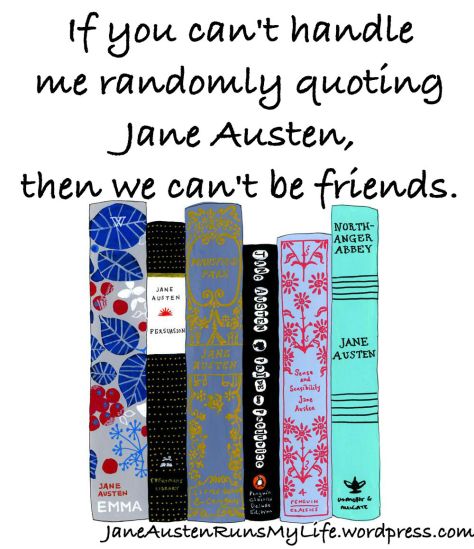 For those of you who enjoy my non-Austen posts, never fear those will be coming as well. I just figured it was time to put the Austen back in JaneAustenRunsMyLife. 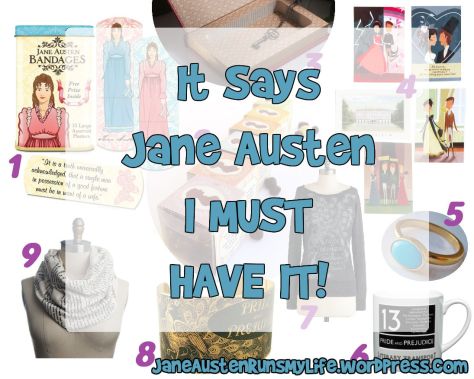 Here is the first of a series: 30 works based on Pride & Prejudice that I plan to be reviewing. (As there are a LOT, I will be posting multiple lists. In fact, thus far my list is 83 items and I’m adding all the time.)

An Assembly Such as This (Fitzwilliam Darcy, Gentleman #1) by Pamela Aidan

The Darcy Monolgues: Part I, The Regency edited by Christina Boyd and written by Various

The Darcy Monolgues: Part II, Other Eras edited by Christina Boyd and written by Various

Fall for You (Jane Austen Academy #1) by Cecilia Gray

The Accidental Bride: A Romantic Comedy by Janice Harayda

The Confession of Fitzwilliam Darcy by Mary Street

Love at the Thanksgiving Day Parade (2012)

Death Comes to Pemberley: Episode One (2013)