So every Wednesday, starting in October, I have been a part of a Tea Party/Bible Study/Book Club on The Magician’s Nephew by C.S. Lewis. This is different from my book club and the Book Club Picks I have been reviewing (and desperately need to catch up on). I also need to catch up on these recipes. Week three we had Organic India Tulsi Masala Chai Tea, Parmesan and Chive Scones, Cucumber Aioli Canapés, Ham, Cheddar, and Apple Tea Sandwiches, Cranberry, Brie, and Rosemary Bites, and Mini Pumpkin Crème Brûlée.

I couldn’t share the recipes in October as I was in the middle of Horrorfest IX, so I am catching up and of course next is the dessert. 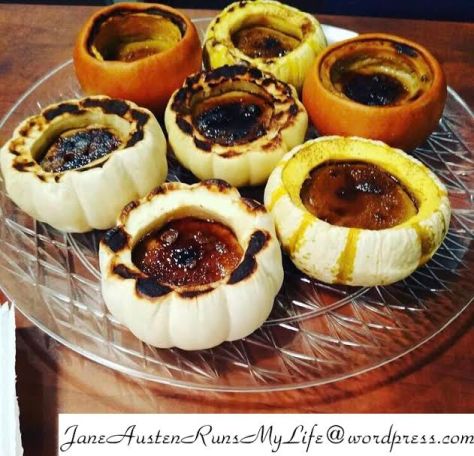 I’m not a Crème Brûlée type person, but everyone loved it!

For more from The Magician’s Nephew Tea Party/Book Club, go to Cranberry, Brie, and Rosemary Bites

For more tea posts, go to How the Queen Found the Perfect Cup of Tea