So I’m not a huge fan of the remake. You probably recall seeing this:

But there are a few films that I truly enjoy that are not the orginal. Such as The Shop Around the Corner and You’ve Got Mail. But this is probably by far, my favorite disney remake ever.

So this film came out in the ’90s and is based on The Jungle Book novel by Rudyard Kipling and the Disney film The Jungle Book (1967). It is similar to the cartoon except it is live action and tells the story of an older Mowgli. Actually, this is what Disney’s Tarzan was based on. While Tarzan is not an almost exact scene by scene ripoff,  like Atlantis is of the film Stargate, it is still extremely close.

Anyways, so the film starts off in the Victorian period with a group of English people going through India. They have many Indian guides helping them, one of which is Mowgli’s father Nathoo. Mowgli is one of the few children who is with the group, and his best friend is his wolf cub, Grey Brother. Mowgli soon meets one of the other kids there, Katherine “Kitty” Brydon, daughter of Colonel Geoffrey Brydon who is in charge of the trek and played by none other than the very handsome, Sam Neil.

What a handsome man

Mowgli gives Kitty a flower to show his interest in her and Kitty gives him her mother’s bracelet. But the two’s friendship gets cut short as Shere Khan ramapages throughout the jungle. In this version of the film, Shere Khan is king of the jungle (as Khan means leader/king), and he watches the jungle for balance. When he finds somene killing for fun instead of food he takes them out. As he is going after one specific person, others get in the way and die. He kills Nathoo, and in the shuffle to escape Mowgli amd his wolf get left behind.

Mowgli is befriended by the animals of the jungle as Bagheera, the panther, takes him to the wolves to be raised by them. He also befriends Baloo the bear and a variety of other animals.

Twenty years into the future, Mowgli is a man and runs with the different animals of the jungle. They are even able to comunicate with each other. In the story there are a group of monkeys, Rhesus macaque, who are the foot soldiers of the lord of all apes, King Louie (an orangutan). They are called the Bandar-log an they steal Kitty’s bracelet for King Louie’s treasury.

Mowgli is enraged and follows them to get his bracelet back. He finds the city of the monkeys where King Louie rules. He goes in and demands his bracelet back. King Louie agrees to give him the bracelet back, if he can fight the snake Kaa and win. Mowgli pulls out a jeweled dagger and uses it to fight against Kaa. And wins the appreciation of all the apes

Meanwhile, Kitty is a woman now, back in India and engaged to Captain William Boone, played by the very sexy Cary Elwes.

Unfortunately, Boone, while being hot, is a cruel, sadistic, gold-digging, ladder climbing, hunter. 😦 Oh well. One day Kitty and co. are out in the jungle painting and hanging out when she runs right into you-know-who…Mowgli. 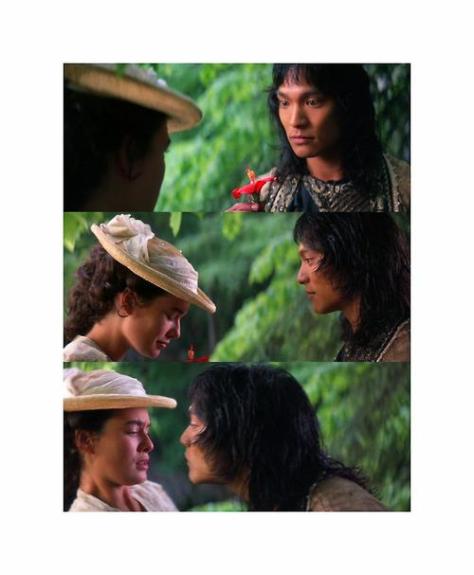 Mowgli is all dressed up, part of his trophies from winning against Kaa, and play-attacks/play-saves Kitty from Baloo. But she takes off.

Mowgli follows the group into the city, sneaking into Kitty’s room. Her screams rouse her bf and the guards, but before they come after him, she recognizes the bracelet he’s wearing as her own.  The guards chase Mowgli throughout the town and he ends up getting thrown in jail

Kitty frees Mowgli and she and Dr. Julius Plumford (John Cleese) try to help re-civilize him. (This scene is just like Tarzan, especially  the projection of images).
Mowgli begins to be able to talk amd act like those around him, but does not feel at home with the aristocrats, that is except for Kitty. He starts falling for her again, even though she is already spoken for. Mowgli also tells Kitty how he survived all these years and introduces her to all of his animal friends and tells her of the rules of the jungle. 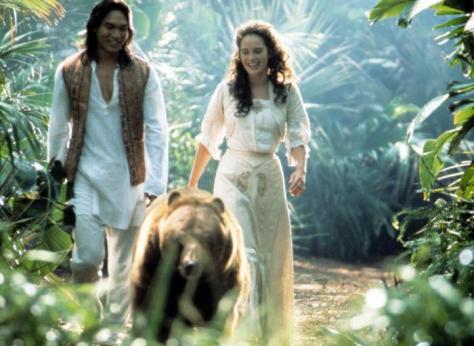 Meanwhile Boone and his friends  are eager to find the famed City of Gold (Monkey city) but don’t know the way. Everyone who has ever tried to find it has never returned. Boone decides to get Mowgli to help him find it.
Boone convinces Kitty to give him a day to hang out with Mowgli, apologizing for having been so mean. He brings Mowgli to his hunting trophy room, but after Mowgli sees that he doesn’t keep the jungle law, he refuses to help him out at all.
There is a ball, and Mowgli is excited to be there with Kitty. Unfortunately, that is when he hears the announcement of their engagement and hears of the plans they have for India. Mowgli decides to leave the city as he could never belong there, and decides to spend the rest of his life in the jungle.
But unbeknowest to him, Boone has other plans for Mowgli. He and his minions try to capture him, but Mowgli is saved by Baloo. Unfortunately, Baloo’s intervention causes him to be shot. Mowgli rushes to the city to get Dr. Plumford, but finds out that he and recently unengaged Kitty are headed for England.
While Mowgli chases after them, Kitty, her father, and the doctor are ambushed by William’s men. Mowgli is able to save the Doctor and sends him to help Baloo, and continues after the Brydons. He agrees to help Boone if Boone will ensure the safety of the Brydons.
The next day, Mowgli is able to get rid of one henchman, by tricking him into some quicksand. He also sends Kitty’s dad to safety on an elephant.
The other henchman is disposed of by more of Mowgli’s knowledge of the jungle. Soon all that is left is Mowgli, Kitty, Boone, and Boone’s remaining minoin. However, as they have finally reached the Monkey City, his minoins accidentally sets off a booby trap and finds himself a goner.
Only Boone, Kitty, and Mowgli make it to the treasure. Boone and Mowgli fight, but Mowgli wins and takes off with Kitty. Boone starts filling his pockets and bags with gold, not realizing that he still has Kaa to deal with.
Shere Khan confronts Mowgli and Kitty as they exit. Khan still does not trust Mowgli, and the two stare at each other a long time before Khan is stared down and leaves in submission – the fulfillment of a dream Mowgli had where he, already a ‘half-tiger’ in spirit, would stare Shere Khan eye to eye and become a ‘whole tiger’.

Shere Khan recognizes that Mowgli another creature of the jungle and allows him to live. Mowgli and Kitty reunite with their friends and family, including Geoffrey and Baloo, both cured by Plumford. Kitty and Mowgli are now together (just like Tarzan and Jane)

I just love this movie and thought it was amazing. It is far better than the animated sequel as it doesn’t retell te orginal story too much, and still keeps all the elements of it when going in a new direction.
For more on both versions of The Jungle Book, go to Snakes on a Post
For more on Disney, go to Once upon a Dream
For more films based on books, go to Second Star to the Right
For more films based on cartoons, go to Disney Lesson
For more on Tarzan, go to Episode VI: Return of the Favorite Movie Lines List
For more on Sam Neil, go to No Force on Earth or Heaven, Could Get Me on That Island