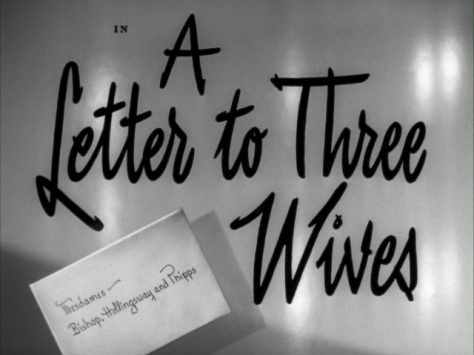 I consider myself extremely lucky to be able to take with me a memenento…you see girls I’ve run off with one of your husbands.

This is one of my favorite movies. One year for Christmas my friend bought me a 20th century fox 4-DVD set. It had An Affair to Remember, Leave Her to Heaven, Peyton Place, and A Letter to Three Wives.

I had never seen this film before, but when I showed it to my mom she said it was a great film. I decided to watch it and feel in love with it. Its an amazingly well done film.

So it isn’t really a horror film or one you would watch around Halloween-but it is a mystery so I decided to included it. My blog, my rules.

So the film starts off with three women, all in bad places in their marriage-and at the root of everyone’s trouble’s is the beautiful, classy, perfect woman-Addie Ross.

We have Deborah Bishop (Jeanne Crain) who is fighting with her husband Bradford “Brad” Bishop (Jeffery Lynn). He is taking a bag and might be staying overnight for “business”. Deborah is upset because Bradford’s old sweetheart, Addie Ross, still is a close friend and seems to influence him. Brad bought Deborah a dress just like one that Addie wore. She feels so insecure and pale in comparison.

Rita Phipps (Ann Sothern) is a radio writer and she and her husband have been fighting about work and money. Addie Ross, who her husband George Phipps (Kirk Douglas), admires-just sent him a record that George loves and inscribed it with “if music be the food of love play on”. He also is wearing his blue suit on his fishing day…what is happening?

Lora Mae Hollingsworth (Linda Darnell) and her husband, Porter Hollingsworth (Paul Douglas), have the most tumultuous relationship of all. They constantly fight, bicker, argue, call each other names, etc. Addie Ross has always been Porter’s ideal woman, the only “queen in a silver picture frame” to grace his home.

They are all supposed to be going to help at the kid’s picnic, then home to change for the first big country club dance of the season. Addie was supposed to join them, but isn’t coming after all.

When they get there they receive a telegram. As they ferry across to the picnic area they discover that Addie Ross has left town, and with one of their husbands.

Which one? Well, she’s decided to keep that her little secret.

The women do their best to help out, but each has a hard time keeping their mind from wondering which one it could be. Is it Brad? Is it George? Is it Porter?

Brad and Addie had been dating and broke up before he went to war (WWII). He has money, prestige, class, etc-just like Addie-and unlike Deborah. Deborah grew up on a farm in Iowa. When they arrive in his hometown and she gets ready to go out to the country club dance and meet his friends she is definitely out of her element. Not sophisticated, young, cheap clothes that are long out of style. She gets so nervous she drinks more than she ever has and forgets to eat, making a fool out of herself. Did Brad finally see Deborah for what she is, a farmgirl out of her depth? And has he decided to go back to the real deal, the one best suited for his position, Addie Ross?

George is a teacher and Rita works in radio, paying the majority of the bills. She invites her bosses over-pople who would rather listen to commercials than the radio programs that are supposed to entertain people-and everything goes wrong.

The radio people are superficial, narcissistic, and don’t care anything for Rita but what they can get out of her. They are so eager to hear their advertisements they break George’s priceless record. He gets so upset that he rips them a new one and shatters all of Rita’s hopes for him to work at the station and make more money. To make it worse, Addie always understood that side of George. She’s too classy to ever choose radio over Shakespeare and the two have always had their little inside jokes. Could he have gotten tired of Rita’s pushing, her being gone all the time working and strayed for a more literary lady-Addie Ross?

Lora Mae is from the wrong side of the tracks. She was working in the Hollingsworth Department store when Porter put the moves on her. But unlike the other clerks he had worked through, she wanted the real thing. She wanted to be loved, adored, and in a silver picture frame on a piano-like how Porter reveres Addie Ross. Porter tries at first to just get “the goods”, but Lora Mae doesn’t play that way. She dumps him and quits her job. But Porter comes after her and asks her to marry him, they should be happy right? Wrong. Porter sees her as a gold digger just trying to get the payout and never expects her to care or want more than money. Lora Mae is angry at him insulting her that way and how he doesn’t really love her, but loves Addie Ross. They fight constantly…did he decided to ditch his plan B for the woman he always wanted? Addie Ross?

The picnic is over sooner than they they though, as each one is dreading what comes next. Which wife will return to an empty home and missing husband.

Which one, which one?

This is an amazing film that I recommend watching to everyone. I love this movie I watch it practically every month.

You have to decide which one you think is the one who runs off. The end is good, but has confused people. In fact General Douglas MacArthur was so confused by the ending that he had his aide write Joseph L. Mankiewicz, the director,  a letter asking with whom Addie had, in fact, run off.

For the previous post, go to I Just Read Books: Three Days of the Condor (1975)

For more Jeanne Crain films, go to I Do Think You Are Confused Mrs. Bowman: Dangerous Crossing (1953)

For more film-noir, go to Is Christine the Ultimate Femme Fatale?