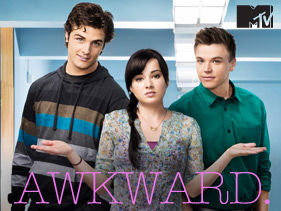 So I mentioned a while back that I was a fan of this show (at least the first season. I don’t like the changes they made later on. I’m J² all the way, the J train is what it is all about.) 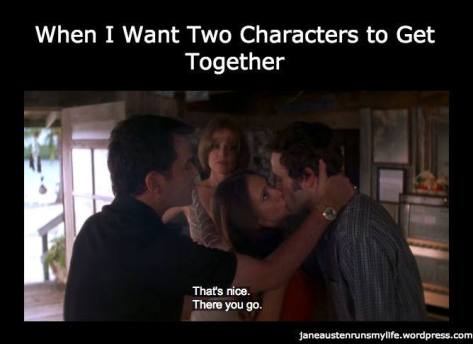 So brief recap on Awkward. The show is about nerd-girl Jenna Hamilton, who hopes this year will be different. Jenna has had a huge crush on her longtime neighbor Matty McKibbon (I don’t see the appeal).

She is surprised when at summer camp he wants to have sex with her. She thinks that maybe this could work out, that they could be a couple; but afterwards Matty ignores her. 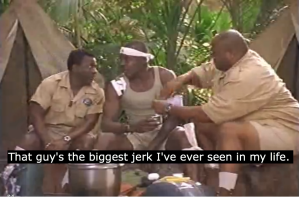 She gets home and gets this horrible letter stating everything wrong with her. She is reading it in the bathroom when she accidentally slips and falls. The big problem, her blow dryer fell in the tub, she spilled all her razors and aspirins, etc.

Everyone thinks she was trying to commit suicide, even though she keeps telling them she wasn’t. Now she has to go to counseling sessions all the time.

Not only that, but she constantly picked on by the most popular girl in school, Sadie, who is jealous of how pretty Jenna is. To further the drama of the year she has Matty who only uses her for sex: 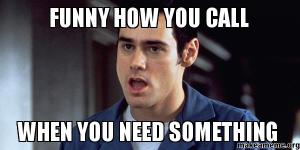 Never wanting to be publicly be seen with her, never acknowledges her, and puts her down in front of everyone.

Then you have Jake. The two start of as friends, then Jake realizes he has feelings for her.

He breaks up with his girlfriend and tries to date her, never pressuring her for anything, not caring who knows he likes her, etc.

So Jenna finds herself trying to figure out what path to take next.

Most Romantic Moment: We Don’t Need to Have Sex, We Can Wait

So the moment I have chosen comes in the final episode in the season. Jenna has yelled at Matty for being a total tool. 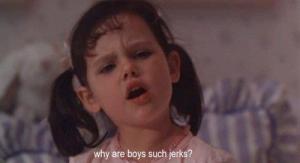 Jake asked her and she agreed to go; them bringing along her friend Tamara and Ming. They go to prom and have a great time The two being silly, Jake holding her hand in public, and the two kissing. 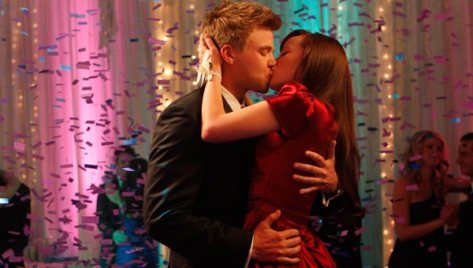 Now the most romantic moment comes after prom. Jenna and Jake have gone back to Jenna’s house and she invites him in. Jake agrees, but let’s Jenna know that nothing has to happen. They can wait.

Not only is it incredibly sweet that Jake is willing to wait, making their relationship much more than just sex, but the fact that Jake is willing to wait; proving to Jenna that he isn’t another Matty or just going to “use and lose her”. And to top it off, she finally has a real relationship with a guy who isn’t afraid to be seen with her, who likes everything about her, and cares about her feelings. 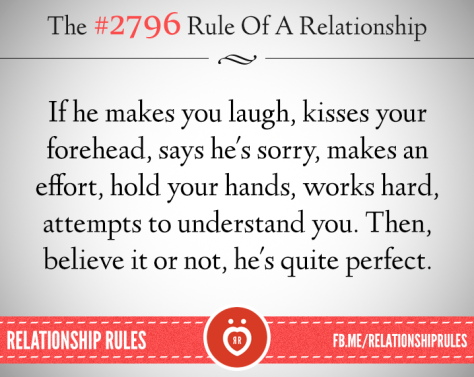 What an incredibly sweet guy. J-Train all the way!

For the previous post, go to You Were Right, Let’s Get Married: Psycho (1960)

For more on Awkward, go to A Whole Lot of Fanfare

For more Relationship Rules, go to Just Like the Beginning 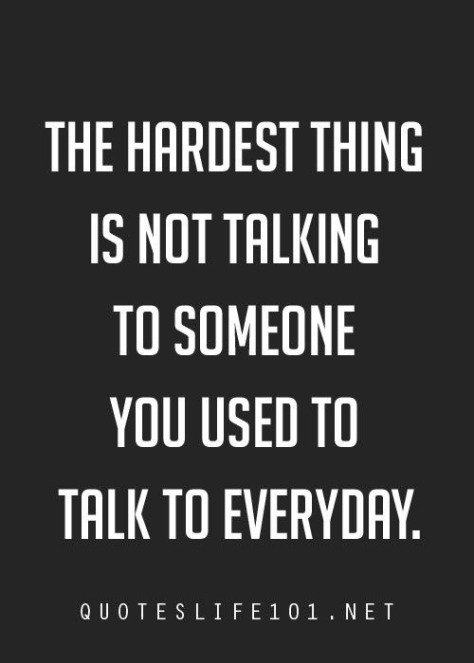 So since Michael and I broke up I’ve been looking for a song to listen to to kind of help me through this, as music is always a great solace in any time of trouble. (It’s funny it has only been a week but it seems so much longer) I mean I instantly thought of Breaking Up is Hard to Do, I Will Survive or Missing You; but those just didn’t really seem to be able to capture how I was feeling. So I was thinking I should check out this playlist I made for my friend and see what spoke to me. About seven months ago my friend Jane broke up with her boyfriend, and I made her a care package full of food, games, some lotion/toiletry stuff, etc.; but I also made her a CD full of songs to help her through her breakup that I titled “Heartbreak”. Its actually kind of ironic because after I made it I was going to delete it, but thought hey I should save that in case I need to play it for someone else later (little did I know that was going to be me). So the music ranges from all kinds of songs starting out sad but moving on to things getting better and ending of course in I Will Survive. Maybe I will do that for another post, my recommended playlist for heartbreak, always a possibility. Anyways, so I was listening to it and found the perfect song that really captures how I’m feeling. I’ll Be Alright Without You by Journey. 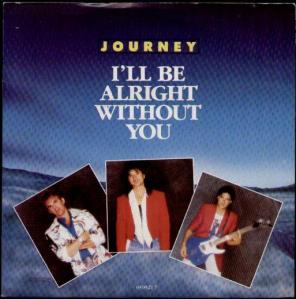 I’ve actually been playing it like nonstop (with headphones as not to annoy my roommate). It’s such an amazing song with really great lyrics.

So unlike my other musical posts I couldn’t find a whole lot of background info on the song. It was released in 1986 on their Raised On Radio album. The song was #7 on the Adult Contemporary chart, #26 on the Mainstream Rock chart and  #14 in the Billboard Hot 100. It was written by Jonathan Cain, Steve Perry, and Neal Schon. It is one of their most known songs, because of course not only is it amazing but because of the content.

So like I said before the lyrics are really beautiful and truly express trying to get over someone.

I’ve been thinking ’bout the times
You walked out on me
There were moments I’d believe, you were there
Do I miss you, or am I lying to my self again

I do these things…
(It’s all because of you)
I keep holding on, but I’ll try
(try not to think of you)
Love don’t leave me lonely
I’ll be alright without you

There’ll be someone else…I keep tellin’ myself
I’ll be alright without you
Oh…love’s an empty face, I can’t replace
(you don’t need it)

I’ll keep holdin’ but I’ll try
(try not to think of you)
All I wanted was to hold you
I’ll be alright without you
There’ll be someone else, I keep tellin’ myself

Breaking up is just hard to do (if it wasn’t there wouldn’t be a song titled that), and this just expresses exactly what I keep telling myself. Its going to be okay, I was fine before June, and I will be fine now in Dec. It’s just hard because all I wanted was to hold him and be with him. And people wonder why we broke apart, I do as well, and I just don’t know. I don’t know what happened. I’m just trying to move on and not think of him, but of course that is always easier said then done. (I don’t remember ever speaking in so many song titles. It reminds me of the Archie comic when Betty does that). It’s weird because it comes in waves. Sometimes I feel just fine and like I used to, getting back into the old routine and everything. But other times I don’t know what sparks it, but I just hurt so much and want the pain to stop. 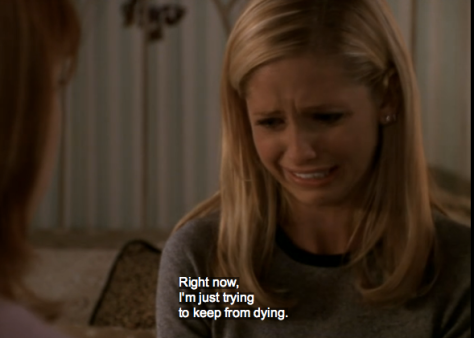 And I know that I’ll be okay, and that later I’ll find someone else, the only problem is that I don’t want someone else, I want him. Things were easier when I was the Ice Queen. Well I know the only thing that can end this is time. Time, chocolate, ice-cream, and Clint Eastwood (Hey he’s single, it could happen). 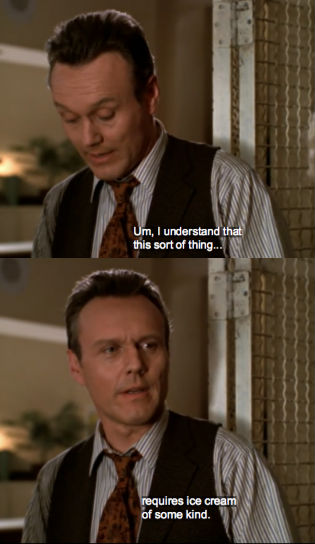 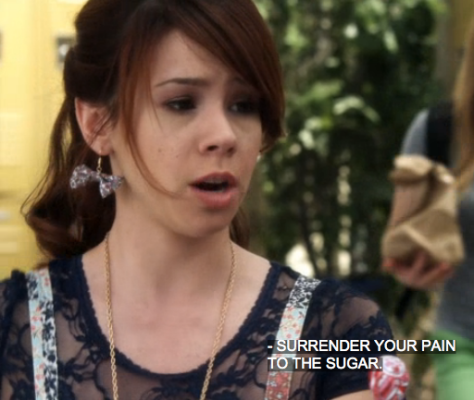 I changed the wallpaper on my computer to a young, shirtless, Clint Eastwood. That always makes me feel better. 😀 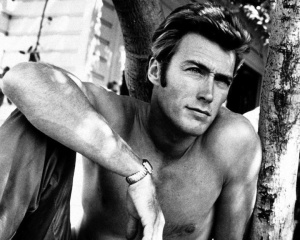 I mean look at this man! Can you blame me for being crazy about him?