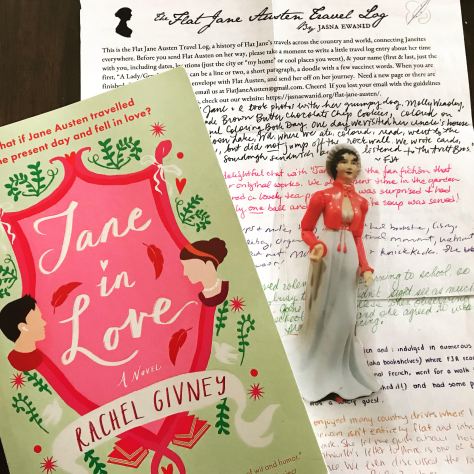 When I was in elementary school, my brother was in the army and stationed in Hawaii. We took a trip to visit him, but problems with the plane arose and the flight was delayed for a few hours. This was two years after 9/11 so we didn’t want to leave the airport and instead had to wait.

While we were waiting I noticed a lady across the way waiting with a big paper something. Of course being a curious child, I moved closer to look and saw it was a paper boy. Not a cardboard cutout, but like someone traced a boy and decorated it. I was trying to figure it out, when the lady noticed me looking and told me that it was Flat Stanley. A group of teachers had been reading Flat Stanley and passing him around taking pictures and when one had a friend going to Hawaii she asked if she could take him with her.

I thought that was the coolest thing. For those of you who don’t know Flat Stanley is a book in which a boy, Stanley, is flattened by a bulletin board, becoming flat, and goes on a series of adventures. One of them is visiting his pen pal by being mailed in a giant envelope.

All I could think was what a great idea and how cool and fun to be a part of something like that.

Fast forward to Summer of 2020, everyone is glum about restrictions and most of us are not having fun.

When I saw that the Jane Austen Society of North America: East Washington and North Idaho (JASNA EWANID) was doing a Flat Jane.

They decided for the summer they would be sending Flat Jane about, she staying with the person who signed up for a week and then moving them onto the next home to visit. They then asked people on instagram if they wanted to sign up and I was like, yes please!

This actually became so popular they made several of them. My turn arrived and I was so excited and couldn’t wait to take her out on adventures.

What a Jane of a day! Today my friend gave me the Jane Austen adaption, Jane in Love by Rachel Givney, and then when I got home I checked my mail and inside was Flat Jane. I am so excited to start all our adventures.

It was great reading the Jane Austen Travel Log and getting to see all the adventures and things people had done. I couldn’t wait to add my own. Sunday I had my niece so I didn’t get a chance to do anything with Jane until later that day.

That night my sister and I did our usual #perioddramasaturdays It was my sister’s turn to pick and she chose Outlander, which I had read the first book but had not seen the TV show. For the occasion I made Blueberry Oat Scones (I’ll share the recipe later), that I had adapted from Plum Deluxe and we had Lavender Flowering Tea.

Flat Jane joined us for tea but declined watching Outlander. She was tired from her long journey from East to West and retired early. She espechially liked seeing the flower created from the tea leaves. 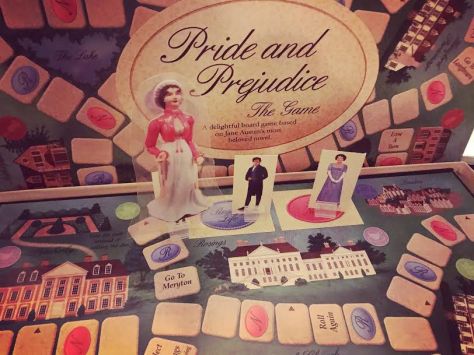 Ever since COVID19 Monday night has become Game Night! Jane and I played my new Pride and Prejudice game that I had received for Christmas. She won as I just couldn’t get the exact number to make my remaining half of the couple get to the church. I kept rolling over or under. I was planning to try playing Marrying Mr. Darcy with her, but I didn’t end up getting a chance to. I do plan to review this Pride and Prejudice game soon.

Afterwards, we played a singing board game with my sister, a sort of creating a song to a tune like in Who’s Line is it Anyway? When my turn came up I felt a lot like when Lady Catherine demanded Elizabeth play, as I don’t sing.

It was a fun game and hilarious as the game came with “lyrics” that were just too goofy. 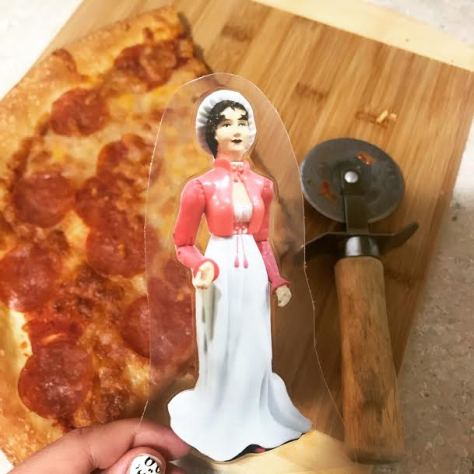 Tuesday night Jane and I had pizza and watched Strong Woman Bong Soon, a K-Drama I recommend for any Jane Austen fan as it has elements that make me think of Jane Austen’s works.

Jane loved the pizza (she definitely wishes they had that back in Regency England) and I think I swayed her to my line of thinking about the K-Drama…but she might have been humoring me.

Flat Jane joined us for our weekly Tea Party/Book Club/Bible Study on The Lion the Witch and the Wardrobe. I think she enjoyed it, although it was unlike any bible study she has ever been a part of.

For these chapters we visited the beavers and had: Chami Winter Apple Spice Tea, a loaf of Dutch Crust Bread, trout, chicken (for the non-seafood eaters [me]), boiled potatoes, and marmalade rolls. Of course I had to explain to her the joke about boiled potatoes. 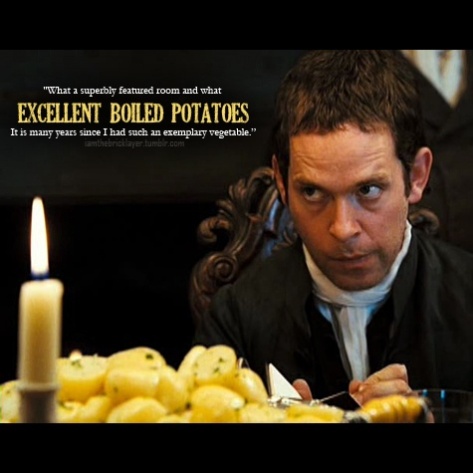 I will be sharing the recipes as soon as I catch up with The Magician’s Nephew posts.

After the Book Club/Tea Party/Bible Study I thought Jane would be interested in going to a regular bible study. She enjoyed it and marveled at my cat pen, amazed at how it looked and wishing they had such easy things to use when she was writing her novels. I plan to show her an Austen adaption tonight, but am still trying to decide which one…should I show her one I love or one I hate so we can both make fun of it? Decisions, decisions…

I finally decided to show her one I hate, Austentatious (2015)

After we watched the series, we had a cup of tea before bed. I had purchased two Jane Austen inspired teas from NovelTea Tins, Pride and Peppermint and Sense and Senchability. I had run out of Pride and Peppermint as I had used the last of it in the tea advent calendar swap I made for a friend, so we drank Sense and Senchability. Jane loved it and was amazed at all the different Jane Austen inspired products that we can purchase today.

Today was a shopping day as Jane went with me to visit a local Vintage/resale shop as I was on the hunt for a purple teacup for my friend’s birthday this month. I found this adorable claw-footed one under $10.

We then stopped off at the grocery store to pick up a few items and Jane was amazed at all the food for purchase and the prices! Plus we came upon many things she had never heard of before protein powder, lactose free milk, Greek yogurt, every kind of chocolate you could imagine, and more.

Saturday turned out to be a shopping day as well, as my sister needed to visit Jo-Anns and Hobby Lobby in the next city over (we have a small Jo-Anns and we do not have a Hobby Lobby). I agreed as long as we stop at one of my favorite restaurants, the Tea Bar and Fusion Cafe. They have the best foods and teas. Jane loved the HoneyTea Latte I bought for her.

Afterwards we went to Hobby Lobby where we looked for fabric for a book sleeve I’m having made.

I was looking for a dark fabric, but Jane spotted this beautiful china blue vase printed one that I just couldn’t say no to.

We only visited a quarter of the store and Jane was amazed at everything they had there.

Afterwards we went to Jo-Anns and looked around the different fabrics and of course I had to show Jane all the muslin they had.

Mr. Tilney mentions purchasing muslin for 5 shillings a yard in Northanger Abbey and that was a good deal, but Jane was amazed that today she could purchase muslin for half the price he paid (converting how much 1800s shillings would be worth in our money).

It was time to say goodbye to Flat Jane as I had her for the week and she is about to journey on to stay with another friend. I helped her pack up and will drop her off tomorrow for her journey to the East Coast.

As Jane is going to visit another Jane Austen fan I couldn’t resist sending one of my Quill Ink Jane Austen Inspired Magazine Cover Cards. If you are interested in getting some for yourself check out her Etsy shop.

If interested in having Flat Jane visit you then contact JASNA EWANID to signup. I recommend it as it is a lot of fun.