Are you saying you wouldn’t want to get on Isla Sorna and study them if you had the chance? No force on earth or heaven could get me on that island.

So Jurassic Park III is not nearly as good as Jurassic Park, but much better than The Lost World because of one thing.

Yep, Jurassic Park III sees the return of Dr. Grant, Sam Neil. 😀 It was supposed to have Jeff Goldblum too, but he injured himself and dropped out.

A lot of people don’t really like this film either.

This version isn’t based on any books of Michael Crichton, but was a newly created plot with a few pieces from the orginal scripts. They took the aviary scene in her from the orginal Jurassic Park novel.  But more about that later.

So the film starts off with two people parasailing around Site B of Jurassic Park, where The Lost World took place. They go into a fog, and the next scene are gone! 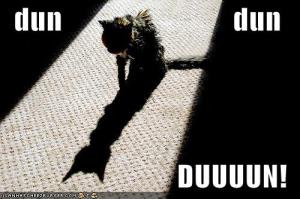 Dr. Grant has become famous for his discoveries, but more people want to know about the Jurassic Park incidents than what he has found.

Dr. Grant: [Dr. Grant is giving a lecture] Now, are there any questions?

[everyone in the audience raises their hand] Dr. Grant: Questions not related to Jurassic Park

[many people lower their hand] Dr. Grant: Or the incident in San Diego, which I did not witness.

[everyone else lowers their hand]

Dr. Grant goes to visit Ellie who is married with a baby. (Now this is something I hate, in the book Ellie & Dr. Grant weren’t dating she was already engaged, so I hated in the films how they were dating in the first film but then weren’t together in the last one.) Dr. Grant and his assistant Billy are working together to create a larynx of a Velociraptor.  The two are appraoached by a couple, the Kirbys, who like to go on wild adventure trips and want to have an air tour of Jurrassic Park. They got a special permit and will only be up in the air. Dr. Grant is adamant, no way, but then the Kirby’s place an extremely large check in his face that changes his mind.

While on the plane, Dr. Grant discovers that the two are lying. They have actually been planning the whole time to stop on the island. Dr. Grant tries to get them to stop, when he gets knocked out.

So Dr. Grant is on the island. Although its not the same one, as he was on Site A originally. They try and  leave, but are stopped by a Spinosaurus, something that was’t on InGen’s list.  As they try to escape, a T-Rex appears and they manage to escape right before the Spinosaurus snaps the T–Rex‘s neck.

As they are moving through the island, and being followed by the Kirbys & Co., they discover parasail remains.

This when the whole story comes out. It turns out that the Kirbys are divorced. The wife is remarried and her husband and the Kirby’s son went parasailing and disappeared. The father, played by William H. Macy, went to the traveling agency and hires a guy. The guy who is a “mercenary” and “knows guys” doesn’t really know or do anything he said he could.  And the check is completely fake too. They are looking for their son Eric and needed a guide, so they tricked Dr. Grant. Unfortunately, Dr. Grant was never on Site B, so he’s like I don’t know what is out here.

The group is trying to make its way through the island without dying, and they end up in the actual area where the dinos were constructed.  The one they showed them in Jurassic Park was all for show, but isn’t the real area. When they are there they get attacked by Raptors. 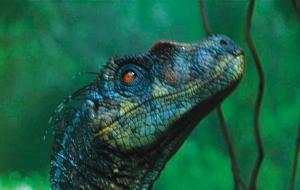 What’s interesting about this portrayl of the raptors is that the designers wanted to incorporate the archeological findings. Scientists have discovered that Raptors were covered in feathers made out of keratin. They couldn’t go completely over the top, so they just put the feathers on the head.

The group gets seperated and Dr. Grant finds himself all alone. He is saved by a young boy, Eric Kirby. Eric Kirby, against all odds, has managed to survive 8 weeks on the island. He’s been living off candy, uses dino pee to scare things off, etc. Eric used to be a big fan of Dr. Grant too.

Erik: Be careful with that. T-Rex. It scares some of the smaller ones away but attracts one really big one with the fin.

Erik: I read both of your books. I liked the first one more. Before you were on the island. You liked dinosaurs back then.

Dr. Grant: Back then they hadn’t tried to eat me yet.

Erik: I don’t know. It was kinda preachy. And too much Chaos. Everything Chaos. It just seemed like the guy was high on himself.

Dr. Grant: That’s two things we have in common.

The two go out looking for the rest of the group when Eric hears his father’s satellite phone.

I love the Spinosaurus there, he reminds me of my dog Katy, when she gets all riled up and you have her chew toy, she makes that face, posed to attack.

The group manages to escape and head to the compound, hoping to find some radio equipment to call for help. After they catch their breath, Billy asks for his bag back, and Dr. Grant tells him he is fine carrying it. Billy keeps insisting and insisting that Grant hand over the bag. This makes Dr. Grant very suspicious and he looks inside, discovering that there are raptor eggs in there. Along the way, Billy found some and took them, hoping that when they got off the island he could sell them. That’s why they have been chased by raptors.

Dr. Grant is furiuous with Billy. And who can blame him. I mean that it has to be tempting to steal those eggs, but come on Billy these aren’t chickens.

They then make their way into a large outdoor cage that hold pteradactyls and other pteranodons. This one of the freakiest scenes in the whole movie. It is super creepy with the fog and the birds. When my sis, niece, and I went to the San Diego Safari Park they have the birdhouse/plant area, it looked JUST like the aviary in Jurassic Park III. I kept saying that if I go in, there are going to be  pteradactyls in there that are going to try to kill me. It freaked my niece out soooooooooooooooo bad!!! She started crying and said she wasn’t going to go in. We had to say so many things to convonce her that she would be okay.

Anyways so they get in the aviary they think is abandoned, but it turns out there is something hiding in there.

The group is reeling from Billy’s death, and make their way down the river on a boat. They float by the Spinosaurus’ poop and find the satillette phone. The Spinoisaurus comes upon them and they begin to fight to  get away.

Dr. Grant manages to get out “Site B River” on the satillete phone to Ellie before he loses it to the river. They manage to get away again. The Kirbys are now all reunited and happy and want to be together.

They are almost free when they are come upon by the raptors. They sense that the Mrs. Kirby, Amanda, is a female and go straight for her. Dr. Grant saves the day when he uses Billy’s larynx creation. He blows in it just right so that it sounds like other Raptors are calling for help.

After they manage to get out of there they take off to the coast where the Coast Guard, Marines, and Navy are waiting for them. They even manage to find Billy.

They all  make it home okay.

So a couple of years ago they were talking about making a Jurassic Park 4 film, which my friend Margarita and I were super excited about it. But then they canceled when Michael Crichton unexpectedly died.

However, now that it is back on and supposed to be out in theaters in 2015, I am so jazzed! In a few years I can include it in the Horrorfests. 😀

Here’s a cover page/poster I made for my Halloween countdown on Facebook.