On the 11th day ’til Christmas my blogger gave to me

I first saw the film when I was about five or six and absolutely loved it. It is such an amazing film, and answers almost all the questions one has ever asked about how Santa makes his night flight possible. Tim Allen was amazing, as he is in everything, and Eric Lloyd was simply adorable as Charlie.

Who could say no to that adorable face?

The script was just amazing as the lines are sooo goood! I recommend it for any family to watch, I know I watch it every year.

The film is about self-centered, divorced, father, Tim Allen as Scott Calvin; being tricked into becoming Santa Clause. The film starts out with him being late to getting his son, as he has chosen to hang out at his Toy Maker Company’s Christmas party. He has a fight with his ex-wife and her husband Neil, a psychiatrist, because they have told Charlie that Santa isn’t real. I really hate Neil, he is such an awful guy.

He is so controlling of Charlie, and is always trying to make these huge decisions about him when he is not even his father. He needs to back off and respect that Scott is the father and the one to make crucial decisions.

Scott has not prepared anything for their Christmas Eve dinner. He wants to start the meal but realizes that to cook his frozen turkey, it’s going to take a long time. He then decides to put it in the oven on the highest temperature possible, burning up everything. This causes them to go to Denny’s because it is the only place open. Just like in A Christmas Story, the evening out proves to be hilarious.

After the two return home, Scott reads Charlie the book Twas the Night Before Christmas. Shortly after the two fall asleep they find themselves being visited by Santa. Although the visit doesn’t turn out as expected. Scott reluctantly ends up becoming Santa himself.

The deliver everything and the reindeers take them to the North Pole where everything is explained by Bernard, the head elf.

The next day Scott wakes up back at home in his bed; convinced everything was just a dream.

Now I really love the irony in this film. Here we have a self-absorbed, toy-inventor who was given the job of being the most unselfish toymaker. Of course Scott doesn’t believe he is Santa, but even though he chooses to live in denial, his body has already transforming. No matter what he does; he gains a belly like a bowlful of jelly, long white whiskers (a beard), and can’t stop wearing red.

And through this all Charlie is just as adorable as ever, telling everyone that his dad is Santa.

“Neil: What about Santa’s reindeer? Have you even seen a reindeer fly?
Charlie: Yes.
Neil: Well, I haven’t.
Charlie: Have you ever seen a million dollars?
Neil: No.
Charlie: Just because you can’t see something, doesn’t mean is doesn’t exist.”

Here is where the story gets sad. Stupid Neil tries to take over everything and convinces the mom to get rid of Scott’s visiting rights as he feels Scott’s appearance will be damaging to Charlie. But Scott manages to manipulate the mom into letting him see Charlie at Thanksgiving. Charlie is finally able to convince Scott that he really is Santa. Just as Scott has finally accepted who he is, Bernard shows up and whisks them all away to the North Pole. However, they forgot to let the mom know about Charlie and she spends the next month worried about him.

Scott really gets into being Santa; and he works with the other elves and Charlie to complete all that needs to be done. They also do some major improvements with the sled and suit. Before you know it, it’s Christmas and they are heading out to deliver presents. 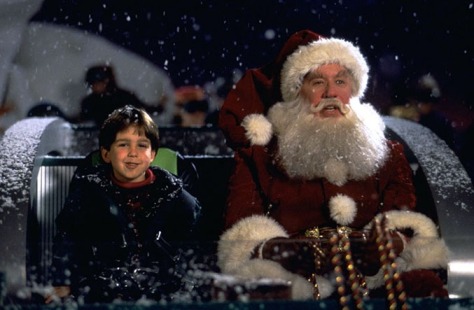 Little do they know that the police are waiting for them. Not only do they have a ton of cops at Charlie’s house, but they are picking up every Santa in that radius and hauling them off to jail.

When Scott does go to the house to drop off the presents, he ends up being arrested and taken in. This scene always reminded me of  Santa Clause is Coming to Town, as he gets caught in a similar way.

My favorite part is when they interrogate him. It’s hilarious.

When the Elves back at Mission Control realize something is wrong, they send out the Elven SWAT Team, E.L.F.S, to break him out.

I always say that line when I see tinsel, “tinsel, not just for decorating.”

So Santa gets out and clears everything up with his ex-wife. Everything ends happily as he goes out to deliver the presents and his ex-wife allows him to see Charlie anytime he wants.

It’s just a great, family film. Beloved by everyone.

Unfortunately, the sequels were not as good. They lacked the same quality of writing and hilarity. Don’t waste your time with them, but watch this one over and over! 😀

To start the 12 Posts of Christmas from the beginning, go to On the 12th Day ’til Christmas: The 12 Men of Christmas

For more on The Santa Clause, go to Episode VI: Return of the Favorite Movie Lines List

For more on Santa Clause, go to the 25 Films of Christmas

For more on Disney, go to CANDY-TIME