For those of you who are new to my blog, every year I do a countdown to Easter by going over different artworks that show Christ and his path to the cross and ultimately, resurrection Sunday. Today we are going to look at the scene of the last supper.

“It was just before the Passover Festival. Jesus knew that the hour had come for him to leave this world and go to the Father. Having loved his own who were in the world, he loved them to the end.

2 The evening meal was in progress, and the devil had already prompted Judas, the son of Simon Iscariot, to betray Jesus.” John 13:1-2

“I am not referring to all of you; I know those I have chosen. But this is to fulfill this passage of Scripture: ‘He who shared my bread has turned against me.’

19“I am telling you now before it happens, so that when it does happen you will believe that I am who I am. 20 Very truly I tell you, whoever accepts anyone I send accepts me; and whoever accepts me accepts the one who sent me.”

21 After he had said this, Jesus was troubled in spirit and testified, “Very truly I tell you, one of you is going to betray me.”

22 His disciples stared at one another, at a loss to know which of them he meant.23 One of them, the disciple whom Jesus loved, was reclining next to him.24 Simon Peter motioned to this disciple and said, “Ask him which one he means.”

26 Jesus answered, “It is the one to whom I will give this piece of bread when I have dipped it in the dish.” Then, dipping the piece of bread, he gave it to Judas,the son of Simon Iscariot. 27 As soon as Judas took the bread, Satan entered into him.

So Jesus told him, “What you are about to do, do quickly.” 28 But no one at the meal understood why Jesus said this to him. 29 Since Judas had charge of the money, some thought Jesus was telling him to buy what was needed for the festival, or to give something to the poor. 30 As soon as Judas had taken the bread, he went out. And it was night.” John 13:18-30

The painting I choose for tonight is The Last Supper by Andrea del Castagno.

My first introduction to this painting my art history professor used it to compare with Leonardo da Vinci’s Last Supper to show how revolutionary da Vinci’s work was with perspective, the mathematically pleasing placement of each person, and the fact that he included Judas with the other disciples instead of separating him like other artists (del Castagno) did. 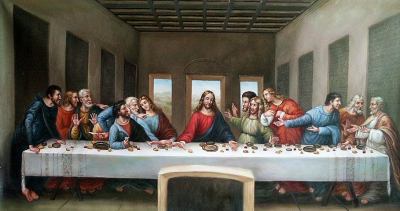 However, as I began to look more at del Castagno’s fresco, I started seeing things that were worth mentioning, things that made this just as interesting a piece.

del Castagno’s fresco was painted in 1445-1450 in the refectory of the convent of Sant’Apollonia, now the Museo di Cenacolo di Sant’Apollonia, and remained tucked away for only the nun’s eyes until discovered in 1866.

So here are some things that I think make this a worthwhile art piece and therefore more deserving than a footnote.

First of all, del Castagno created a very well placed art piece in colors and body placement. He repeats the same colors throughout his piece offering different shades in the background and foreground. If you look at their hands you see how he does the same method with their bodies, their stances mimicing each other, and creating bookends to the central action of Jesus, Judas, and John.

Secondly, while del Castagno did not use perspective, as it was relatively new, he does create a captivating portrait with his use of the style trompe l’oeil, a tool in which you take a flat surface and make it appear three-dimensional. While looking onto his piece, it is very easy to forget that this is a design a wall and not the alcove he created.

Many of my classmates laughed at this when they saw how easy it was for Judas to be picked out, and I have to agree that at first I too thought it was a bit silly to have him so obviously separated from Jesus and the other disciples. But even though this was popular to do with artists at the time, I kept thinking maybe there was another reason why the artists did this. Most artists made Judas obvious because the people looking at it needed guidance as they couldn’t read and the image created a better way for them to understand the text. However, In this case, the people who would be looking at this would not only be educated but know the bible, and this story very well. To me, there had to be another reason why del Castagno choose to do this.

I believe the reason that Judas is so far from everyone, yet so close as he is right across from Jesus (an arm’s length away). is to show what can happen when sin gets in our life. Here is Judas a man who has been with Jesus through the years, witnessed his miracles, etc.; but because he allowed greed into his heart-was stealing and sinning- creating that little crack to let the devil in; he would forever be separated from Christ. Physically close, yet eternally far. A message that is important for those who are already serving God, such as the nuns, about how easy it is to be separated from him spiritually, while physically we can appear to be serving him. Remember none of the disciples knew what was going on in Judas’ heart as they can only see what is on the outside, what Judas wanted them to see-but Jesus knew what was going on as he can see the heart. Just as he can see yours.

For more Last Supper images, go to What If God Was One of Us?