Well last year I decided I was finally going to see the big 3; Halloween, Friday the 13th, and Nightmare on Elm Street. Each of these movies impacted their generation and spanned a multitude of sequels and remakes.

I wish I could post this on Friday the 13th, but unfortunately there is no Friday the 13th this year in October so I will have to settle for the 12th. I know, bleh. 😦

So, I actually thought this film wasn’t that bad. I mean I’m not really into huge slasher flicks, but I thought this was pretty good. I really loved the camera angles they used, as it helped make it look like someone was watching them.

yep from his POV

First of all I was pleasantly surprised to see Kevin Bacon in the film.

I like Kevin Bacon, I think that he is extremely attractive, (well in some films with the proper haircut otherwise he looks strange). And he definitely looked hot in this one. 🙂

One of the parts I didn’t like was stupid Annie riding around with a strangers; as she was hitchhiking to the camp.

Hey I’m going to be dumb enough to get a ride to the middle of nowhere with a stranger. Nothing will happen to me.

Also all the sex scenes, that was not for me.

The strip-Monopoly idea was kind of dumb too. Who plays that? It almost as dumb as strip chess in Two Weeks Notice.

I was sad when Bill died. I liked Bill. 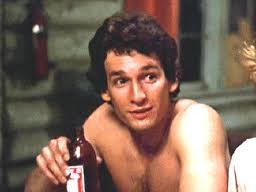 Well I don’t make out alive. Must have been too much strip monopoly.

The end I think would have been better for me and more creepy  if Scream hadn’t ruined it. Although Mrs. Voorhees was still creepy; in fact she was downright freaky.

And then when Alice is in the boat and Jason jumps out, that was really unexpected.In fact at this point I jumped out of my seat

The very last scene, when Alice is in the hospital and wakes up screaming she is being killed made me think of the newest When a Stranger Calls when Jill thinks the stranger is after her in the hospital. They must have copied Friday the 13th for that part.

All in all it wasn’t bad but it wasn’t amazing either, a definite fun to watch on a Friday the 13th.

Here’s a cover page I made for my facebook this year as part of my countdown to October.

To read Horrorfest from the beginning, go to I Don’t Belong in the World

To read the previous post, go to A Squashed Mess

For more on Friday the 13th, go to Hello? Is There a Killer in My Kitchen?

For more on serial killers, go to A Deliciously Creepy Tale

For more slasher flicks, go to Whatever You Do, Don’t Fall Asleep

For more films that spanned a gazillion remakes, go to I Bid You Welcome

For more on summer camp, go to Someone Very Special

For more on When a Stranger Calls, go to A Very Scary Story