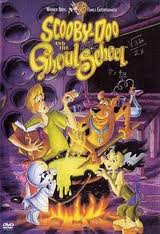 Maybe I shouldn’t have taken this job as a gym teacher.

I love this film so much! I remember that I used to watch this all the time as a kid. I still do as I love it, and my nieces and nephew are always bugging me to watch it with them. We’re big Scooby fans.

So the story starts out with Scooby, Shaggy, and Scrappy all going to Grimwood School for Girls to be P.E. teachers. Every year the girls compete against the Calloway military school at a volleyball game and lose; so this year Ms. Grimwood decides to hire someone to coach them. Fred, Daphne, and Velma aren’t there with them for some reason.

So when the guys get there, they discover that the school is for GHOULS not GIRLS! They being Shaggy and Scooby, are totally terrified and want to leave, but Scappy convices them to stay and hang out.

So the ghouls are Sibella, Dracula‘s daughter,

It’s fangtastic to meet you

Tanis daughter of the Mummy,

I’ve been dying to meet you

And Phanty (Phantasma) the Phantom’s daughter. I think they are alluding to the Phantom of the Opera because she plays the organ, but they actually make her a ghost in this.

There is also a dragon named Matches and they also allude to The Adam’s Family by having a mobile hand crawling around.

So anyways; Scooby, Shaggy, and Scrappy start preparing the girls for the tournament. All are eager to win, espechially Tanis who wants to put the trophy in her mumuy case, and Winnie who wants to teach the Calloway Cadets a lesson.

I love the cheesy, punny lines in this film. “It’s Batastic”, “This helps me unwind”, and “it’s a real Howl”. 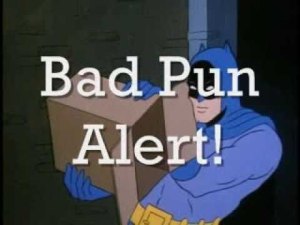 Meanwhile the Cadets are also preparing for the tournament. In fact Tug, the leader of the group, has created a remote control volleyball so that they are sure to win.

However, everything that Tug creates ends up blowing up. Usually hurting him or the captain.

The next day, they have the tournament where the boys try out their secret weapon.

As cheaters always get what’s coming to them, the boys lose due to their attempt. The remote control they have ends up getting swallowed by Scooby-Doo, and his hiccuping with it helps the girls win.

The next day the school is all in a flutter as they are having an open house. Ms. Grimwood is making lots of snacks. This part always made me hungry, and want some kind of treat to eat. All the monster dads are going to come which starts freaking Scooby and Shaggy out as they realize they will have The Mummy, Wolfman, Dracula, Phantom, and Frankenteen all under one roof.

They have a fun time, but then all the monsters let Shaggy and Scooby know that if anything happens to their daughter and her friends; their lives are OVER!

Unbeknowest to them, evil lurks in the area. Revolta, the evil swamp witch wants to kidnap the girls and turn them into her evil slaves.

She uses her evil spider bats to spin webs around Shaggy’s head, convincing him to take the ghouls out on a jog through the swamp. The girls love it, but pretty soon the Spider Bats have captured all the girls, and Revolta spirits them away to her lair.

The Calloway boys see what’s happening, but don’t do anything. They are supposed to be going on a hike through the swamp as welll, but are trying to just get back home.

It’s up to Scooby, Shaggy, and Scrappy to save the day. Matches ends up joining them as well. In Revolta’s lair they have to defeat evil mirror monsters and giant swamp creatures to try and save the girls.

In the end they are captured and Scooby-Doo turned into a frog. Frog Scooby was able to save the day though. Revolta had hooked all the ghouls up to these machines to make them her evil minions. Frog Scooby was able to jump around and cut off the tubes, having all the girls turn back to normal. They use Revolta’s wand to get rid of her. The Calloway boys come back and save the day using a helicopter they created.

At the end, the ghouls and cadets have a big party and dance the night away. The monsters also come and join in.

Scooby and Shaggy are feeling really confident with themselves, when Ms. Grimwood introduces the newest recruits. One of which is The Creature from the Black Lagoon‘s daughter,

And what appears to be The Great Gila Monster’s or Godzilla’s daughter. 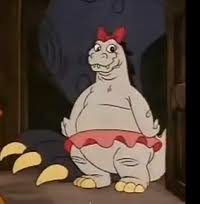 This is too much for Shaggy and Scooby as they cannot handle any more ghouls and monsters. They quickly grab Scrappy and jet outta there. It ends with them waving good-bye to everyone, and heading out on the road to a new place. 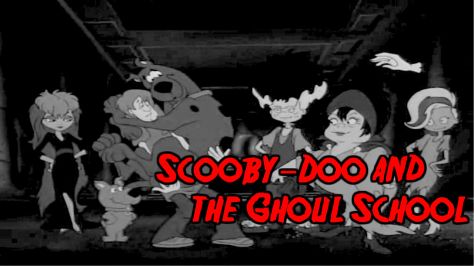 To start Horrorfest from the beginning, go to I Don’t Belong In the World

To go to the previous post, go to The Only Thing That Matters is the Ending

For more on Scooby-Doo, go to A Monster Race

For more films based on cartoons, go to Disney Lesson

For more horror parody, go to A Deliciously Creepy Tale

For more on The Addam’s Family, go to Someone Very Special

For more on The Bride of Frankenstein, go to I Want Friend Like Me

For more on Dracula, go to I Bid You Welcome

For more on Frankenstein, go to It’s Alive, it’s ALIVE!

For more on The Mummy, go to Eternal Punishment for Anyone Who Opens This Casket

For more on The Phantom of the Opera, go to Feast Your Eyes On My Accursed Ugliness