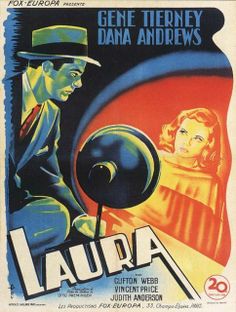 Murder is my favorite crime.

So I strongly contemplated whether or not I wanted to include this in my Horrorfest. It isn’t really a horror film but more of a mystery thriller, even better defined as a film-noir. I really wanted to include it but, since it wasn’t a real “horror film” I wasn’t sure if I should. But then I had a moment of clarity.

This is my blog. I can do whatever I want!

So I decided I would.

So this actually started out as a play and then was turned into a novel. Otto Preminger saw it as the perfect thing to turn into a film. It is known to be one of the best Film-Noir films along with one of the best mystery-thriller films of all time. AFI ranked it #4 on their list of the 10 greatest mystery films.

This film is also famous for Gene Tierney’s portrayal of Laura. This helped give her title of “Film-Noir Queen”.

So anyways, on to the film. 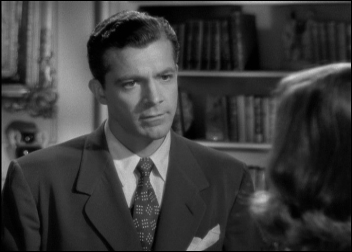 He is investigating the death of the beautiful, successful, advertising executive Laura Hunt. Laura was murdered by a shotgun blast to the face.

Det. McPherson starts investigating and finds himself with multiple murder suspects and motives.

Waldo (Clifton Webb) is a famous columnist and he was the one who actually discovered Laura. She tried to get him to advertise something for him, and faster than you could say Pygmalion, he takes her under his wing and tries to change her and “improve” her.

“Waldo Lydecker: She was quick to seize upon anything that would improve her mind or her appearance. Laura had innate breeding, but she deferred to my judgment and taste. I selected a more attractive hairdress for her. I taught her what clothes were more becoming to her. Through me, she met everyone: The famous and the infamous. Her youth and beauty, her poise and charm of manner captivated them all. She had warmth, vitality. She had authentic magnetism. Wherever we went, she stood out. Men admired her; women envied her. She became as famous as Waldo Lydecker’s walking stick and his white carnation.”

But it goes a little more than that. Waldo becomes obsessed with Laura.

Yep. He is in love with her and wants to be the only man. Every time some other guy came around he would find a way to criticize them and demean them. The two broke it off, but Laura was very upset with him.

Laura started dating another guy, Shelby Carpenter. No matter what Waldo said, Laura wouldn’t listen to him. In fact she decided to marry him.

Yep he was angry. Extremely upset about losing Laura to someone he thought was so unworthy? Angry enough to kill?

Shelby (played by Vincent Price) comes from great stock, has expensive tastes, and loves the high life. Only one problem, he has no money. None at all. Instead he has to use to his charms to court rich, older women and have them pay for his expenses. In fact he had found a real great giver in Ann Treadwell (Judith Anderson). That is until he met the very charismatic Laura. Not only is she the perfect cash cow to support him, but young and beautiful. Who could ask for anything more?

“Shelby Carpenter: I knew there was something on my mind. Ah yes, will you dine with me tomorrow night?

Shelby Carpenter: No, it’s not that – it’s the next night. And what about three weeks from tonight? And all the nights in between?

Laura Hunt: Shelby, you talk as if I had no other engagements!

Shelby Carpenter: And two months from now? And the month after that?

Laura Hunt: What about next year?

Shelby Carpenter: Oh, that’s all settled. What about breakfast?

Laura Hunt: What about dancing?

The two starting dating and she gave him a job, one of which he didn’t have to do too much work. The two become engaged and all is well.

It turns out that Laura wasn’t the only person Shelby was seeing. He was going around with a lot of poor models. Rumor has it that Laura found out and was not happy…could he have killed her? If she was about to leave him high and dry, he might have become incensed and murdered her?

Ann Treadwell is the rich older aunt of Laura. She and Shelby had been in a relationship for a long time. She knew what he was, but that was what she wanted.

When he left her for Laura, she was furious that her niece stole him away. Furious enough to kill?

One night Det. McPherson is at Laura’s apartment looking at her painting and trying to figure out the mystery, along with Laura. Why does she draw him to her?

When suddenly somebody comes crashing through.

Who is the dead body?

They find out that the murdered girl is one of the models, Diane Redfern. The same model that Shelby was involved with.

Yep this leads Mark with another suspect…Laura

So we’ve heard how Laura rose from nothing to being the top girl. She was beautiful, smart, classy, etc. All women envined her and all men wanted her. 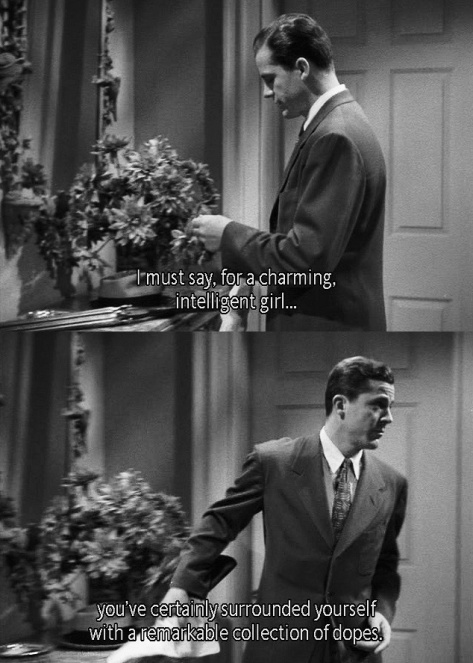 But then the guy she loves and is supposed to marry is running around with a model!!! Cheating on her!!!!

She knew Diane was in love with Shelby, and she knew Shelby only cared about her money. She knew Shelby was taking models to her house and she could have gone after them and shot her for trying to mess with her man.

Or she could be so angry at Shelby for cheating on him that she prepared a way to take care of him.

Instead of killing him, she could have killed Diane to make it look like Shelby and make him pay!

Does it seem too far-fetched? Well she wasn’t at the cabin when the cops looked that weekend. Her response “I was talking a walk.” She didn’t see the newspapers and come back saying she was alive? Or hear it on the radio? Her response: I don’t get a newspaper and my radio is broken.” Did anyone see you there? “Nobody”.

What does this mean? Who is the killer?

You’ll have to watch the film to find out. 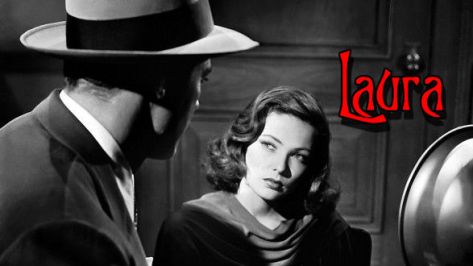 For to the previous post, go to Every Time I Bring a Girl Over, You Try to Eat Her!

For more on Laura (1944), go to All I Know About Trilogies is That in the Third One, All Bets are Off

For more on Vincent Price, go to The World’s Greatest Criminal Mind

For more mysteries, go to Quite a Horror Story

For more films based on books, go to But the Book, It Will Never Close…

For more films based on a play, go to Some People Are Just Born Evil