Face it when you hear those words “it is a truth universally acknowledged…” your mind goes immediately to Pride & Prejudice imagining Mrs. Bennet attempting to marry off all her girls.

Jane Austen was such an amazing writer. She creates an opening hook that has you deeply invested in the story within two seconds. This hook is one that has continued to be entertaining for ages. I mean that saying never gets old, but constantly draws you in no matter how many times you have read it.

“It is a truth universally acknowledged, that a single man in posession of a good fortune, must be in want of a wife.”

Unfortunately in today’s time, that no longer seems to be true. Most guys who are well off are more interested in sampling honey pots than buying the actual beehive (like my metaphor? I thought it was a nice change from the milk and cow analogy).

If Mrs. Bennet lived today this would be her immediate reaction: 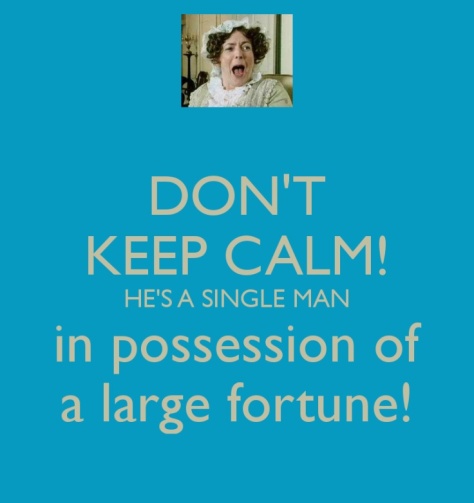 She’d be like, “go after that man and use every ounce of your feminine wiles to capture him. Don’t let him go.”

It’s interesting  how marriage was such an important thing for a women in Regency times, especially since the woman’s main role was to be mother and helpmate, but it is a theme that is a major factor only for our Pride and Prejudice heroines.

In Sense & Sensibility, the mother and daughters are not even concerned about marriage, but are focused on their grief for their dead husband and father or occupied on trying to manage their lives in a poorer state of affairs. In Mansfield Park, no one thinks about who Fanny will marry until the rascal Henry Crawford starts paying attention to her. Emma is determined to remain a spinster and her father is thoroughly pleased with that. In Northanger Abbey, Catherine’s family never brings up the question of who and when Catherine should marry. By the time Persuasion starts, Anne has already turned down two proposals but her extremely vain father is not worried over her lack of a martial state but that she isn’t up to his standards of beauty. Only in Pride and Prejudice do we see a mother so determined to marry off her children. Even with the Elliot estate (Persuasion) being entailed, the Bennets are the only ones who talk about their worry on having no male children.

What also is interesting is that even though “a single man in possession of a good fortune, must be in want of a wife”; there are many male characters in her novels who have money and do not wish to marry. There is Willoughby, Tom Bertram, Henry Crawford, Captain Tilney, and Mr Elliot (the younger).

Of course her books are also filled with men who want to get married, after all if they weren’t would we love them as much as we do?

One of the most intriguing things about this phrase is the statement in “want of a wife”. Want’s two most used definitions are “have a desire to possess” or “a lack or deficiency”. Therefore this statement applies to both Binglely (as one who desires a wife) and Darcy (has a lack of one) along with all the other Austen men. Every Austen hero and villain starts the book off in want of a wife as they do not have one. And by the end of each book all Austen heroes, and some villains, have one.

And just like any other mother, Mrs. Bennet can’t help hoping that her daughters will catch the eye and heart of a single man in possession of a good fortune.

If you are interested in buying a shirt like Lizzie Bennet, Zazzle and Cafepress sell them and many other Jane Austen inspired products

For more on this opening line, go to Opening With…

For more on Mrs. Bennet, go to Parental Favoritism

For more bible verses, go to Thanks A Lot