This is one of my favorite films from childhood. My dad received it as a Christmas gift from my aunt one year, and that evening we popped it in our VHS player and watched it. I loved it so much that I would want to watch it all the time. 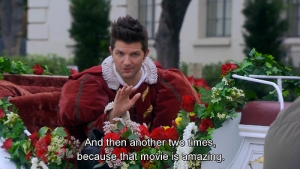 Ursula Stanhope hails from San Francisco, CA and is traveling throughout Africa. Her fiancé, Lyle Van De Groot (Thomas Haden Church) is a total pompous jerk and has gone looking for her to drag her back to be immediately married. He is guided by two poachers who are looking for their big score.

The next day when Ursula and Lyle are out, they run into a lion. Lyle takes off; tripping, falling, and knocking himself out. But Ursula doesn’t need to worry, George (Brendan Fraser); a man who was lost in Africa and raised by an ape named Ape, saves her.

He cares for her until they are found by her fiancé and her party. When Lyle and the poachers attack trying to “save” Ursula and capture the famed “White Ape”; George gets injured and finds himself traveling to San Francisco with Ursula. Is San Fran ready for this Ape-Man? Will his home be okay without the King of the Jungle?

Most Romantic Moment: Be Comfortable and Dance With Me

This moment comes in the middle of the film after George and Ursula have been searching for her group with no luck. They are hanging out with a bonfire, getting to know each other better, when the apes start playing music. George invites Ursula to dance with him, but she is afraid to do it that she might look dumb.

George tells her not to worry, and helps her feel comfortable with herself.

George: No people here to look stupid for. Just George.

I know this might not seem like a lot, but you have to look at Ursula’s parents. She comes from a super wealthy family and a mother that is obsessed with appearances. She’s been told what to do her whole life, look at how her mom choose her fiancé, and probably has never let go or had anyone try and get her to just relax and have fun. Especially with her super critical mother.

George doesn’t know any of this, but he still tries to help Ursula feel comfortable and just have fun.

For the previous post, go to I Don’t Want to Say Good-Bye: American Dreamer (1984)

For more on George of the Jungle, go to A Little Monkey Business: Chinese New Year

For more Disney films, go to I Would Go Through Anything for You: Sleeping Beauty (1959)